Chastain has made herself known around the world through the legacy of her impressive soccer career, and especially the 1999 game-winning penalty kick that remains the pinnacle of the U.S. Women’s National Team movement, but now devotes her time to giving back to children through the beautiful game.

“Soccer inspired me when I was a young girl to challenge the limits, to be competitive, to fall down, to lose, to be a good winner, and how to be a good teammate,” said Chastain. “Those were tough lessons for me, but they shaped the way that I live my life now as a parent, a friend, and as a coach, and for me, soccer is just a part of who I am.

“I understand the need for young kids to have role models and mentors to make a difference in their lives…It seems simple, but I honestly think that we can make a difference in a child’s life if we look them in the eye, give them a high five, and recognize that they’re doing a good job.”

Aside from her coaching, mentoring, and philanthropic initiatives in her hometown of San Jose, California, Chastain has a passion to give back to the city of St. Louis as well because of her history with the city.

“I played a national championship as an adult in that small St. Louis Soccer Park,” reflected Chastain. “There’s also quite a few players that have come through St. Louis and played on the national team, so I feel like I’ve been around the arch throughout my whole soccer career. I know the history of soccer, and St. Louis is a great part of it.”

Chastain knows the value of soccer in St. Louis and is enthusiastic about continuing to bring more and more soccer into the city bloodstream. St. Louis could be fortunate enough to get a Major League Soccer club within the next year, and Chastain recognizes how impactful this could be for our city. 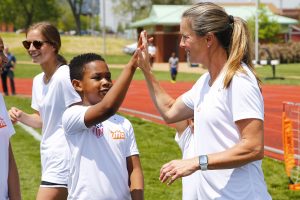 “You’ve seen what professional sports can bring to a community. Soccer has open arms to everybody…it is an international language that’s spoken globally,” said Chastain. “For the MLS to not already have St. Louis doesn’t make sense to me because this is where U.S. Soccer almost began, really. It would be fitting that St. Louis would be the home of a new MLS team.”

The soccer clinic was sponsored by Cutter Insect Repellent, who reached out to Chastain in order to collaborate in an effort to benefit the St. Louis community.

“I want to give back as much as possible, so when Cutter called and asked if I wanted to do a clinic with them, I thought ‘Cutter’s from St. Louis, they understand their community, they are involved at the grassroots level,” said Chastain. “The fact that Cutter is sponsoring U.S. Soccer, and the fact that they are willing to come into the community with me, that’s a win-win.”

Chastain attributes her work ethic and passion for helping others to her parents, who invested in her soccer career and set an example of breaking barriers, surpassing all expectations, and opening their arms to everyone.

Chastain’s fantastic experience with the USWNT drives her to share the blessing with others and tirelessly pursue bright futures for every young girl who wants to lace up her cleats and play, and the National Team will always be a pinnacle part of her life.

“1999 was a very special time. It was unlike any other time in the history of soccer in this country, and really in the history of women’s soccer globally. Never had there been a stadium with 90,000+ people watching women’s soccer or a stand-alone women’s event,” said Chastain. “It’s become more normal for us to see women playing on big stages, which I think was part of an equation that we actually didn’t even know was out in front of us, and so I guess what I would say to young men and women out there is be your genuine self. Be humble, be kind, and be compassionate, and good things will continue to follow.”

The National Team continues their legacy as an example for aspiring young female athletes everywhere as they face New Zealand on Thursday at 7:00 PM at Busch Stadium in their third and final friendly before the World Cup tournament in France.