On the day the Cardinals hoped to get back on the field and play their first game in nine days, the coronavirus won again.

Three new positive test results, two from players Ryan Helsley and Austin Dean, and the third from a staff member led to the postponement of Friday night’s game against the Cubs at Busch Stadium and the games scheduled for Saturday and Sunday as well.

“A lot of frustration and a lot of disappointment,” president of baseball operations John Mozeliak said. “Right now I really don’t know what our future looks like at this point. All I know is we’ve lost these three games and we will certainly take this day by day.

“For all the optimism we had a couple days ago to be where we are today it’s definitely frustrating for everybody involved.”

The new positive tests brings the total to nine players and seven staff members affected since the first COVID-19 results were announced a week ago out of a 57-person traveling party.

The three postponements bring the total to 10 games that the Cardinals have had to miss because of the COVID-19 outbreak which first began to spread through the team last week as it flew from Minneapolis to Milwaukee.

The Cardinals have not played since July 29, and have played only five of a scheduled 60 games. Some teams were playing their 15th game on Friday night.

This weekend was the Cubs only scheduled trip to St. Louis, with the other two series between the teams, a total of seven games, set to be played in Chicago. Now it would appear that if played, all 10 games between the two teams will be played at Wrigley Field, although the Cardinals would have to be the home team for three of them.

The earliest the Cardinals can play now is Monday, at home against the Pirates. Starting with that game, there will be 49 days left for the Cardinals to play 55 games before the scheduled end of the season if they are to play all 60 games. According to Elias Sports, the last team to play 55 games in 49 days was the 1975 Minnesota Twins.

In a zoom call with the media Friday night, Mozeliak said “mathematically it would seem challenging to me” to play that many games in that span of time, even with seven-inning games in the doubleheaders.

“I think stop-starts are difficult,” Mozeliak said. “From players, staff, employees, emotionally we’re pulling on a lot of different cords here. To think we were going to play tonight and then find out late last night the likelihood that wasn’t going to happen was certainly disappointing.

After flying back to St. Louis on Wednesday morning from Milwaukee – where the traveling party had been isolated in their hotel rooms for more than five days – the team held workouts at Busch Stadium on Wednesday and Thursday in preparation for the resumption of the season.

“There was a lot of energy and a lot of enthusiasm yesterday when we were on the field, just kind of getting back to this version of normal,” Mozeliak said. “Then for my phone to ring last (Thursday) night at 9:30 p.m., I kind of suspected it wasn’t good news. It’s really been kind of a fire drill today to just sort of try to mitigate spread as best we can.

“What we’ve learned from this virus is that sometimes what has happened has happened. It’s kind of like trying to put the toothpaste back in the tube as an afterthought.”

The Cardinals were doing additional testing on Friday and contact tracing to try to determine if the virus could have spread to other players or staff members. The team expects to have the results of Friday’s tests on Saturday and hopefully will decide by Sunday what comes next, Mozeliak said.

“It’s a frustrating period for everybody involved,” he said. “We don’t want to put people in a position where they are in a place where they could get ill. We’re trying to do the very best we can to control something you can’t see. It’s an invisible virus. One thing we are all understanding is we don’t know much about it.

“No matter how much you think you understand and hear things about incubation or how long somebody may or may not be contagious these are really difficult things. No matter how many experts you engage you are still getting a lot of different answers. With all the decisions we make, it’s almost like the goal line keeps moving.

“I don’t know what tomorrow looks like. Nobody does.” 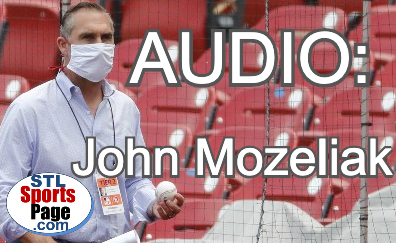