At STLSportsPage.com we like to promote charity and report on athletes doing good in the area. This week both Ozzie Smith and Isaac Bruce, two of the biggest stars in St. Louis participated in events giving back to the community.

The 15-time All-Star and 13-time Gold Glove winner spoke with the group of 40 or so children about the importance of always trying your best, presented each with a new Rawlings glove and baseball, and led the group in a game of catch. 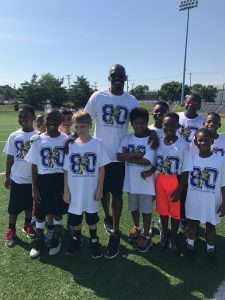 Isaac Bruce will host the Flag Football Challenge on Saturday, June 1, 2019 at the former Rams Park. Corporate teams will take part in the ultimate fantasy football experience. Celebrity coaches will be helping teams in a five-on-five flag football tournament. The event is free for spectators and open to the public.

The event will benefit the Isaac Bruce Foundation, started in 2006 which focuses on health, wellness, nutrition, fitness and education.  Through the Foundation, Isaac reaches out to youth and teaches them at an early age the importance of a healthy lifestyle with a focus on education.

Twelve corporate teams will compete in a team-building event to benefit the Isaac Bruce Foundation. The tournament will include teams from Mercy, Ameren Corporation, Edward Jones, Zoie LLC, Mantality, Team Gateway To A Cure, WILsquare Capital, Elite Orthopedics, Genesis Pharmacy Services, Ryan Kelley the Home Loan Expert, and Scott Air Force Base.  Through the power of play, teams will prepare, execute, compete, and celebrate together in a great atmosphere.