The Latest from STLSportsPage.com
By Lou Korac

BOSTON — As the seconds ticked off the TD Garden clock, those ticks signified the pinnacle of climbing that mountain that started on the bottom on Jan. 3.On June 12, the St. Louis Blues climbed past 30 teams to reach the top and with it, won the Stanley Cup for the first time in franchise history with a 4-1 win over the Boston Bruins in Game 7 of the Stanley Cup Final on Wednesday.The Blues, who had the fewest points in the NHL on Jan. 3, became the first team in NHL history to win the Stanley Cup after being in last place at the turn of the calendar.

The Blues, who won the series 4-3, got a goal and assist each from Conn Smythe Trophy winner Ryan O’Reilly and Alex Pietrangelo, and Jordan Binnington became the first rookie goalie in NHL history to win 16 games in one playoff season. 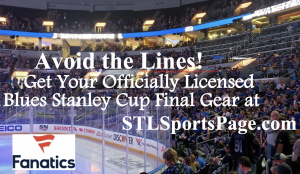 The Blues, coming off a disappointing 5-1 loss in Game 6 to bring the series back to Boston in a winner-take-all game, built a 2-0 first-period lead on goals by O’Reilly and Pietrangelo 3:05 apart, a period in which the Blues were outshot 12-4 but got scintillating goaltending from Binnington.

Brayden Schenn and Salem, Mass. native Zach Sanford added third-period goals to cap off an incredible second half to the season and Stanley Cup Playoff run that culminated in the Blues’ first Cup title.

“You build those relationships by going through tough times,” said Pietrangelo, who logged 25 minutes 56 seconds of ice time. “A lot of us have played a lot of games here. We’re close, tough start, this year just brings you closer together. It’s a tight group, trust me. That’s why we play the way we do.

“A lot of work and off-season’s, seasons. It’s unbelievable. It’s probably hard to believe, but it doesn’t matter now. Here we are.”

Here they are, after significant free agent signings (Tyler Bozak and David Perron on July 1, along with the acquisition of O’Reilly from the Buffalo Sabres for three players and two draft picks and the signing of Oakville’s Pat Maroon on July 10), a coaching change that saw Craig Berube replace Mike Yeo on Nov. 19, the Blues were 15-18-4 when they woke up on Jan. 3, then reeled off a franchise-record 11-game winning streak that vaulted them back into contention, then they eliminated the Winnipeg Jets in six games, Dallas Stars in seven games, San Jose Sharks in six games and now the Bruins in seven.

Somehow, some way, they found a way to reach the mountain top.

“We went through a lot as a team, you know, and we ended up battling our way into the playoffs, so then you start to think about what can happen, so we had to get there first of all,” Berube said.

Once they got there, it was all systems go.

“We played a lot of games this year, it’s going to be a short summer for me again,” said Perron, who was on the losing end of the Stanley Cup last season with Vegas, which lost to first-time winner Washington. “This is the best summer possible. I can’t wait to have my day with the Cup. We worked for this our whole lives. I’m really excited.”

“We’ve been waiting for this for so many freaking years,” Maroon said. “And to be from St. Louis and put this sweater on every night, holy cow. We brought it. We brought it home.”

Binnington, much like Game 5, gave the Blues a chance with some brilliant goaltending in the first period.

The Blues were outshot 12-4, were careless with the puck in their own zone, but their netminder was there time and time again until the Blues got the game’s first two goals.

O’Reilly’s fifth in four games opened the scoring at 16:47 to make it 1-0. He deflected a Jay Bouwmeester shot between Rask’s legs off a wrister from the point.

This is the same O’Reilly who was so excited to get traded to the Blues, his first words to general manager Doug Armstrong, who phoned him to welcome him to St. Louis were “Let’s go win a Cup,” he fulfilled his end of the bargain.

“It’s a heck of a journey,” O’Reilly said. “It’s crazy. The ups and downs of it. The ability to just stay with it knowing it’s a process, to actually lift that now, it’s tough to describe. It’s a dream come true. These guys worked so hard for it. There’s so many people involved that we found a way to do it.”

Pietrangelo made it 2-0 with 7.9 seconds left in the first after Jaden Schwartz chipped the puck in the zone past Brad Marchand, then went in and got it. As Marchand left the ice on a bad line change, Schwartz found Pietrangelo cutting to the net and he went forehand, backhand and lifted a shot over Rask on the Blues’ fourth shot of the period. The goals came on consecutive shots.

Once the Blues got that lead, they locked it down in the neutral zone and defensively. Boston outshot the Blues 33-20, but most of those quality scoring chances came in the first period.

When Schenn made it 3-0 at 11:25 of the third, off a pass from Vladimir Tarasenko, the coffin was shutting, and when Sanford, who used to watch the Bruins play as a kid with his father Michael, who passed away at the end of training camp prior to the regular season because of a heart attack, scored at 15:22, the celebration was beginning to percolate.

“It’s pretty awesome,” said Blues defenseman Jay Bouwmeester, who logged a game-high 28:34 finishing his 16th season. “You do for long enough and you always think, and you hope, that you have a chance. You didn’t want to waste this opportunity. We have such a special group. This is what it’s all about. To cap it off, it’s something you’re connected (to) forever.”