For the past two year, fans enjoyed watching the Cardinals and other MLB teams wearing jerseys with their childhood nicknames on the back. The announcers filled viewers and listeners in on stories relating to the nicknames and fans were able to to see the players in a different light. The red ones shown were last year’s jerseys and this year MLB is going with a black and white theme. 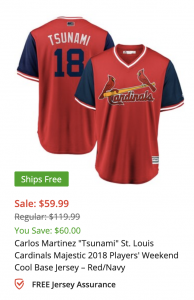 Once again, this year major leaguers will shine a light on the unique personalities behind the world’s most talented baseball players when the third annual Players’ Weekend returns to MLB ballparks on August 23-25. Carlos Martinez’ shirt is shown left, with his “Tsunami” nickname on the shirt.

Major League Baseball players will showcase their passions, backgrounds and interests by putting their own personal touches on what they wear and equipment they use during Players’ Weekend.

Fanatics has teamed up with MLB to sell replica jerseys and you can check them out in our Fanatics Store.

Players have selected nicknames for themselves to be on the backs of their jerseys– Carp, Goldy, etc.– and are given the chance to design, wear and use creatively colored and decorated equipment including bats, spikes, batting gloves, wristbands, compression sleeves and catcher’s equipment.

A patch honoring Tyler Skaggs will also be available for players to wear on their uniforms, if they choose.

New to Players’ Weekend this year will be an expansion of mobile device usage. Prior to the National Anthem, players will be permitted to use their personal handheld mobile devices, such as smartphones and tablets, on the field or in the dugout to promote the event via social media. Also prior to and after the game, each player will again have the option to wear a t-shirt highlighting a cause or charity of his choice. 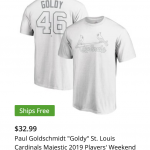 During the games, players will wear specially designed monochromatic all-black and all-white uniforms created specifically for the weekend-long event with jerseys by Majestic. Fans wanting to buy them can choose the player they want on the Fanatics website. Shown left is the white “Goldy” shirt. Besides shirts the website also has jerseys. 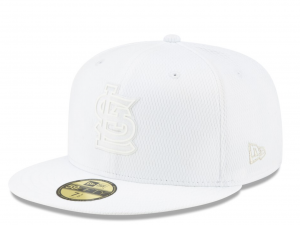 Along with the uniforms, there will also be special white caps by New Era Cap and socks from Stance.

Each home team decided which colorway it will wear during the weekend with each visiting team wearing the other uniform option.Pitchers on teams wearing white uniforms will wear black caps to ensure all umpires and batters have clear visibility of each pitch. Images of every team’s uniforms can be found here:Players’ Weekend Caps and Players’ Weekend Jerseys.

Inspired by players’ style choices when they are away from the field, the fashionable monochromatic uniforms allow for each custom accessory design to stand out more than ever before. During Players’ Weekend, photo shoots will be conducted with players at ballparks to highlight the standout designs, which will be amplified over social media between MLB, the MLBPA, Clubs and most of all, individual player accounts using #PlayersWeekend.

In addition to the standard uniform items, Players’ Weekend 2019 will be the first MLB event with a league-wide batting helmet. The same Rawlings helmets used in all regular season contests will be decorated in matte black and matte white to further accentuate the white-on-white and black-on-black uniforms.

Game-worn, authenticated Players’ Weekend jerseys and batting helmets will be auctioned at MLB.com/auctions, with  proceeds being donated to the MLB-MLBPA Youth Development Foundation.

Authentic and replica Players’ Weekend caps, jerseys and socks are available at FANATICS.

Russ Chambliss brings his passion for baseball and his creative background, including producing electronic music albums, to his job as the Peoria Chiefs hitting coach. […]