Scott Rolen, Jason Isringhausen and Mort Cooper will be inducted into the St. Louis Cardinals Hall of Fame this weekend on Saturday, August 24– the same weekend the Cardinals will be celebrating “Players Weekend.”

This year the uniforms have a new twist– they are black and white. The players get to put their nicknames or whatever they want on the back of their jerseys.  Fans will see names like “Tsunami,” “Carp,” and “Goldy” on the uniform backs. 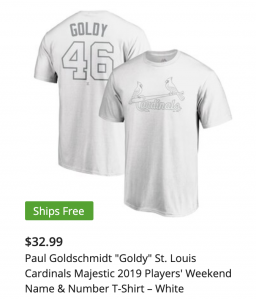 It’s a special day created by MLB to give a little insight into the personal lives of the players. They even get to brig their cellphones and address their fans via social media just before the game.

Fans are able to go to online and buy souvenirs, like the “Goldy” shirt shown left, for the weekend. Be sure to check out our Fanatics Store . The store helps insure this content is free, so if you are going to buy them,  help us out and buy from us.

The Cardinals Hall of Fame event will take place at FOX Sports Midwest Live! in Ballpark Village and is open to the public.

This is the sixth induction class since the team dedicated the Cardinals Hall of Fame with an Inaugural Class on Opening Day in 2014. The 2019 Induction Class was selected via a formal voting process, with input from fans and St. Louis baseball experts.

“Selecting the members of the Cardinals Hall of Fame Induction Class has become yet another beloved tradition in our organization,” said Bill DeWitt Jr., Cardinals Chairman and CEO earlier in the year, when the announcement was made. “We look forward to celebrating the achievements of these remarkable players selected by our fans and our Red Ribbon Committee each August during Induction Weekend.”

Chosen by the fans, Scott Rolen and Jason Isringhausen were the top two vote-getters in the Cardinals Hall of Fame online balloting presented by Edward Jones. The ballot, which also included Cardinals legends Keith Hernandez, Matt Morris, Edgar Renteria and John Tudor, was selected by a Red Ribbon committee of Cardinals baseball experts through a secret ballot process. Cardinals fans cast nearly 75,000 votes over the six-week voting period, the second highest total since the inaugural fan vote in 2014.

In addition to nominating modern players for fan balloting, the Red Ribbon Committee also elected Mort Cooper, a veteran player, for induction using a secret ballot process. Cooper, a right-handed pitcher and MVP award winner, played for the Cardinals from 1938-1945 and anchored the team’s starting rotation during St. Louis’ three consecutive trips to the World Series from 1942 through 1944.

The St. Louis Cardinals Hall of Fame was established as a way to recognize the exceptional careers and significant achievements of the greatest players in Cardinals history, as well as those who have made exceptional contributions to the organization. To be eligible, players must have played for the Cardinals for at least three seasons and must be retired as a player from Major League Baseball for at least three years. The eligible pool of players is divided into two categories of “modern players” and “veteran players”. If a player retired more than 40 years prior to the induction year, he is classified as a veteran player.

The following is a description of each Inductee’s career as a Cardinal:

In his five plus seasons with the Cardinals, Scott Rolen dominated the hot corner winning Gold Gloves in 2002, 2003, 2004 and 2006. He was named a National League All-Star in 2003, 2004, 2005 and 2006, and captured a Silver Slugger award in 2002. In 2004, Rolen slashed .314/.409/.598 with 34 home runs and 124 RBI. His stellar 2004 campaign continued during the postseason with his pennant-clinching, two-run homer off Roger Clemens in the 6th inning of Game 7 of the National League Championship Series vs. Houston. During Busch Stadium II’s final season in 2005, Rolen was voted by Cardinals fans as the third baseman to the All-Busch Stadium team. In 2006, Rolen helped the club to its 10th World Championship, closing out the postseason with a 10-game hitting streak.

Jason Isringhausen spent seven seasons as the Cardinals closer. During his tenure, the Cardinals won the Central Division four times, capturing the pennant in 2004 and 2006 and winning the World Series in 2006. He registered a National League-best 47 saves in 2004, tying Lee Smith’s franchise record, until Trevor Rosenthal saved 48 in 2015. An All-Star in 2005, “Izzy” holds the franchise record for saves with 217 and ranks third among Cardinals relief pitchers with 373 strikeouts. His 401 appearances, all in relief, are the sixth most in club history.

A big, burly right-hander known for his blazing fastball, Mort Cooper came up through the Cardinals farm system and made his debut at the end of 1938 season with a three-hit, complete game win in Philadelphia. Cooper would go on to anchor the Cardinals pitching staff during the most successful three-year stretch in franchise history (1942-44), winning at least 20 games in each of those years (one of just three players in Cardinals history to achieve such a feat). A two-time All-Star, Mort won the National League Most Valuable Player Award in 1942 after leading the league in wins (22), ERA (1.78) and shutouts (10). A two-time champion, Cooper ranks second in franchise history in World Series games started (6) and innings pitched (45.0).