The Cardinals aren’t quite where they want to go, but they guaranteed Sunday that they will be back in the postseason this October for the first time since 2015.

A fourth consecutive one-run win over the Cubs – the first time in team history they have won four consecutive one-run games on the road – clinched at least a wildcard playoff spot and lowered their magic number for winning the NL Central to four over the Brewers. The loss eliminated the Cubs from the division race.

Once again it was a ninth-inning rally that produced the victory, as the Cardinals came back from a 2-1 deficit with two runs to complete their first four-game sweep at Wrigley Field since 1921.

A pinch-hit triple from Jose Martinez started the inning, and pinch-runner Tyler O’Neill scored the tying run on a fly ball from Dexter Fowler. Tommy Edman followed with a single, stole second and scored the go-ahead run on a double down the left-field line from Paul Goldschmidt.

Three of the four wins in the series came in the Cardinals’ final at-bat; the home-run from Matt Carpenter in the 10th inning on Thursday night and the back-to-back homers from Yadier Molina and Paul DeJong in the ninth on Saturday.

The win was the fifth in a row for the Cardinals, who moved to a season-high 22 games over .500 at 89-67. The Brewers are off on Monday before beginning a three-game series on Tuesday night in Cincinnati, so the earliest the Cardinals can clinch the division is on Wednesday. 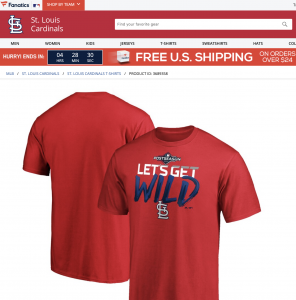 At the plate: The Cardinals had only four hits through the first eight innings, one of which was a long home run by Paul DeJong onto Waveland Avenue leading off the second. Two of the other three Cardinals baserunners through the eighth were erased in double plays … The leadoff triple by Martinez in the ninth was only the second triple in his career, the other coming on June 14, 2017. He had 1,177 plate appearances in between the two triples … The Cardinals did not draw a walk until after Pedro Strop walked the first batter he faced, Marcell Ozuna, after relieving Yu Darvish following the RBI double by Goldschmidt.

On the mound: The Cubs loaded the bases in the first inning for the second game in a row, but the only run that scored came on a passed  ball as Miles Mikolas got a strikeout and a popup to get out of the jam and strand the other two runners … The Cardinals turned three double plays behind Mikolas but Nicholas Castellanos put the Cubs ahead 2-1 with a leadoff homer in the sixth, the 27th home run allowed by Mikolas this season … He was pulled with two outs in the eighth and runners on first and third. Tyler Webb came in got the third out on a fly ball from Kyle Schwarber … Webb got the win, throwing only seven pitches and retiring the only batter he faced … Andrew Miller pitched the ninth and earned his sixth save, pitching around a two-out single from Jason Heyward.

Worth noting: Darvish struck out 12 and did not walk a batter in his 8 1/3 innings. It’s the fifth time since 1997 the Cardinals struck out at least 12 times and did not draw a walk against an opposing starter, and three of the five games have come against the Cubs. Carlos Zambrano did it in 1997 and Kyle Hendricks in 2016; the Cardinals won all three of those games … The last pinch-hit triple in the ninth inning for the Cardinals came from Kolten Wong on Sept. 28, 2016 … Kris Bryant left the game after spraining his right ankle on a play at first base in the third inning … The last time the Cardinals won four consecutive one-run decisions was in 2015 and the last time they did it in September was in 1985.

Looking ahead: Adam Wainwright will get the start on Monday night in the opener of the three-game series at Arizona.