For the first time since 2014, the St. Louis Cardinals have advanced to the National League Championship Series.  The Redbirds begin a best-of-seven series tomorrow against the Wild Card winning Washington Nationals, who defeated the Los Angeles Dodgers in their Division Series matchup three games to two.  A very limited amount of NLCS tickets are available at cardinals.com/postseason.  Fans wishing to obtain tickets are strongly encouraged to purchase verified tickets on the team’s website or from the club’s official online marketplace, StubHub.  Fans are also encouraged to arrive early to the ballpark to allow everyone to be in their seats by the start of the games.  Below are details for the NLCS series against the Nationals. 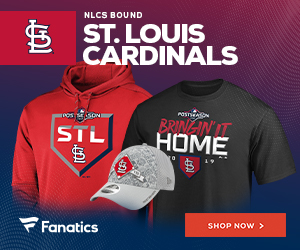 POSTSEASON ECONOMIC IMPACT: UP TO $32 MILLION FOR REGION’S ECONOMY

According to the St. Louis Regional Chamber, the Cardinals run to the National League Championship Series is set to generate up to $32.4 million for the regional economy.  The total economic impact depends upon the number of games played in St. Louis, and since up to four games could be played at Busch Stadium, the maximum impact is estimated to be $8.1 million per game.

The $8.1 million figure is based on the assumption that the games would draw 45,800 fans per game.  Direct visitor spending and direct Busch Stadium operations are expected to reach a total of $4.3 million per game with an additional $3.8 million in indirect and induced expenditures.  Additionally, the same analysis estimated a total economic impact of $12.6 million from the two National League Division Series games in St. Louis.

The analysis uses the economic impact model IMPLAN, which measures how spending tied to an event has multiple impacts and spreads throughout a region, thereby benefiting local households and firms.  The direct, indirect and total economic impact figures are based on estimates of visitor spending and operations expenditures at Busch Stadium.

Delaware North Sportservice, the club’s concessionaire for more than 50 years, has developed a few new menu items for the 2019 postseason, including:

The Busch Stadium Fan Information Guide is designed to assist our fans by presenting information about St. Louis Cardinals/Busch Stadium offerings and accommodations.  View the guide at cardinals.com/info.

The Cardinals Fan Food Guide is available at cardinals.com/food and via the MLB Ballpark app to help fans locate their favorite food and beverages at Busch Stadium.

Hand stamps will be available for guests who need to exit the stadium, but plan to re-enter.  The stamps will be located inside Gate 1 and Gate 4.  All guests will be required to show their hand stamp and valid ticket for re-entry.  Guest will have bags inspected and be screened upon re-entry at any open gate.  All re-entry ends 90 minutes after the scheduled first pitch. The smoking patio is located outside of Gate 1.

Kolten Wong is deciding games with his glove and doing the little things with his bat and on the bases to help propel the Cardinals back to the postseason.  Now on the cover of the latest issue, the player who’s positioned to win his first Gold Glove reveals the factors behind his evolution as a fielder, hitter and baserunner—and much more!

Subscribe today at cardinals.com/publications or call 314-345-9000, or purchase at Busch Stadium from gate vendors, or at team store and Cardinals Authentics locations.  Follow the magazine on Twitter at @CardsMagazine.

Throughout the postseason, fans can support the charitable arm of the organization Cardinals Care:

Cardinals Nation Restaurant will host the Official Pregame Party of the St. Louis Cardinals before every home playoff game.  The ticketed pep-rally style party is located on the second floor of Cardinals Nation in the Hall of Fame Club, two and a half hours prior to each game all the way until first pitch.  Visit cardinals.com/pregame to purchase tickets or for more information.

Cardinals Hall of Fame and Museum

The Cardinals Hall of Fame and Museum is open daily from 10 AM – 6 PM and remains open through the 7th inning on home game nights.  Visit the Museum desk during the 2019 postseason and register to win a Family Membership or a $25 gift certificate to the Cardinals Nation Restaurant & Bar.

Save on tickets to the Cardinals Museum with the Championship Countdown Deal!  Each Cardinals postseason victory will take $1 off the price of a regular adult admission ticket through the month of October.  11 wins means another World Series championship and $1 tickets to the Museum!

For more information or to purchase tickets, visit cardinals.com/museum. #CardsMuseum