Today is a day to celebrate. It’s National Bacon Day. So, go ahead, have an extra strip or two of bacon with those eggs and toast. Order that bacon cheeseburger  with extra bacon with a smile.  But don’t limit yourself to the normal bacon applications that appear on your plate. Consider indulging in those trendy bacon creations that became famous and infamous over the last decade; candied bacon, chocolate covered bacon, battered and deep-fired bacon on a stick. And don’t forget the mixologist homage to smoked and cured pork belly, the Bacon Manhattan cocktail. 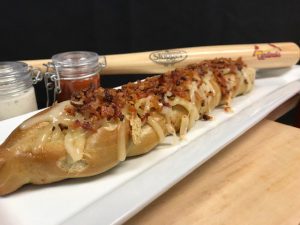 Bacon indeed inspires us, especially chefs. That said, I can’t wait to see where bacon surfaces on the 2020  Busch Stadium menu.  I’m sure St. Louis Cardinals Chef Norman Taylor has bacon on his mind. Last year he treated bacon lovers to bacon topped twisted pretzels and the bacon and provel cheese Stuffed Burger.  Who knows, Chef Norman may decide to experiment with one of the newest bacon trends, marinated bacon.

Marinated bacon recently surfaced on the consumer market, thanks to McCormick, the spice people. McCormick’s Grill Makes rolled out four flavors of its  marinated bacon.  Of the four, the Brown Sugar Bourbon flavor hit a home run with me.  Of course, one can flavor bacon in your own kitten. It just takes a little extra time.  I’ve been sprinkling brown sugar and cracked pepper on bacon and oven cooking it since YK2.

As National Bacon Day will fade as will the old year, I offer a wish to STLSportsPage.com readers. May all have a prosperous new year. And may everyone be able to bring home the bacon throughout 2020. 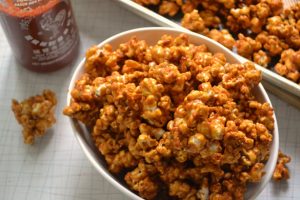 Preheat the oven to 350 degrees. Lay the bacon flat on a sheet pan and cook for 20 minutes. Remove from oven and drain bacon on a plate covered with paper towels. Lower oven temperature to 225 degrees. When the bacon cools, chop it into small pieces and set aside.

To make the caramel, melt the butter in a medium saucepan over medium heat. Add the brown sugar and corn syrup and mix well. Cook for 4 minutes until bubbly and hot. Remove from the heat and add the salt, baking soda and Sriracha. Mix well. Working quickly while everything is hot, drizzle the caramel over the popped corn and top it with the bacon. Toss the popcorn mixture gently until it is all well coated. Wrap a large baking sheet in foil and transfer the popcorn mixture to it. Spread the mixture evenly and put the pan in the oven for 15 minutes. Remove and toss the popcorn and return it to the oven for another 15 minutes. Remove and transfer the popcorn to two clean baking sheets separating it and spreading it evenly to cool. Let rest for 10 minutes, then eat or store in an airtight container.

Place 2 layers of paper towels on microwavable plate. Place bacon in single layer on paper towels. Cover with 1 layer of paper towel. Microwave on high 2 to 3 minutes or until bacon is partially cooked. Set aside to cool slightly. Wrap 1 piece of bacon around each beef frank, spiraling from end to end and securing at each end with wooden toothpicks.  Transfer to a grill or broiler for 8 to 10 minutes or until bacon is crispy, turning frequently and brushing with barbecue sauce during last 5 minutes of grilling. Remove toothpicks before serving. Serve on hotdog rolls with desired toppings and condiments.