For “Everything You Need To Know About NHL All-Star Weekend in St. Louis”CLICK HERE

In celebration of Black History Month, the NHL Black Hockey History Tour, a uniquely curated mobile museum, will stop in St. Louis for NHL All-Star Weekend. The Black History Month celebration is part of Hockey Is For Everyone, a joint NHL and NHLPA initiative that has celebrated diversity and inclusion in hockey since 1996.

The traveling museum, which will visit 14 NHL cities across North America, celebrates today’s stars and looks back at the pioneers and trailblazers who helped shape NHL history. 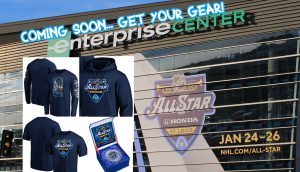 The exhibit moves to the Boys and Girls Teen Center in Ferguson on Friday.

The NHL and St. Louis Blues will host a Black Hockey History Leadership Luncheon and a private screening of the Willie O’Ree documentary, “Willie” at 11:10 a.m., which will be preceded by remarks from Missouri Congressman William Lacy Clay.

As a legacy of the 2020 Honda NHL All-Star Weekend, the National Hockey League (NHL) and St. Louis Blues, along with equipment partner Bauer Hockey, have made a long-term investment in girls’ and women’s hockey in the St. Louis area.

The investment made in girls’ and women’s hockey will cover equipment, ice time, coaching, and special events for girls and women of all ages. It also covers year-round programming, summer skills camps, female official development programs, female coaching clinics, and a new 3 vs. 3 Skills Development League.

“Thanks to this joint initiative by the Blues, Bauer and the NHL, young women and girls across the St. Louis area will now have an even greater opportunity to learn hockey and experience all the benefits that come with being involved with our game,” said Commissioner Bettman. “Our core belief is that “Hockey is For Everyone” — these are potent words made even more powerful when they are paired with action like this year’s All-Star Legacy project.”