We’ve put together an article with businesses that are open and some of the creative ways companies are staying open and how they can help you. We know people’s hours may be going down or jobs lost so we’ve given a few ideas in that area.  CLICK HERE to check it out.

We’ve started a video series called: “Weathering the Storms (Of Life) with the Rains.”

It will be a series of fun quizzes and inspirational messages by Rob and Sally Rains. CLICK HERE to check it out.

What One Neighborhood is doing

(Note: You can try any of these ideas with your family if you don’t have a neighborhood that would be conducive to this type of thing. There are a lot of fun ideas here. Just make up a family schedule and you are on your way.)

Emily Grozdanic and her husband Edo of the Laclede Meadows neighborhood in Affton have two children. It is a typical neighborhood where the neighbors don’t all know each other. In the fall she decided to try and get the neighbors together on Facebook so she created a page. In the past there had been email communication to try to bring a sense of community to the neighborhood, but in the recent year the person who ran it became unable to do it.

Once the coronavirus came and citizens were required to not gather in groups and start practicing “social distancing” she thought the Facebook page would be a great way to reach out to families.

“I know there are a few families with little ones and school-aged children that may start going stir crazy here soon,” Emily Grozdanic said in a Facebook post. “Does anyone else want to do something ‘fun’ for the subdivision to spread a little cheer?”

She got great support and went door-to-door, taping a note to neighbor’s doors who were not on the Facebook page asking them to join,

The neighborhood now has a “calendar” of events so the neighbors will be able to be in communication and not feel so isolated. The calendar is posted at the bottom of this article in case anyone else wants to try it. The names have been removed and it gives an idea of activities. 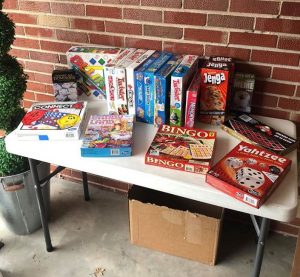 Most of the activities so far have been for kids but the grownups– even those without kids– have been having fun helping out. There are Game Exchange days– Tuesdays and Fridays. Everybody has old games they haven’t played in years, so it’s easy to set up a game exchange by asking neighbors to contribute. The games are set out on a table for several hours on the designated days. 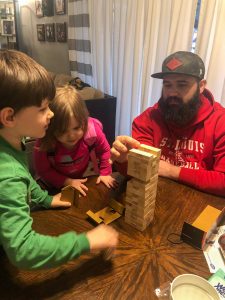 Residents can either write their names on the games to get them back at the end, or just donate them and at the end, families can keep some or they can be donated. One person in charge of the game exchange and on designated days they set the games out and people can bring back their game from last time and take a new one.

“We are open to other ideas, and hoping to give our neighborhood something to look forward to, excite one another, and maintain some sense of bonding with other people even while we’re all practicing social distancing,” said Grozdanic. 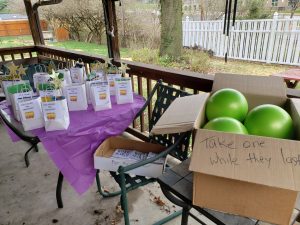 Wednesday they held a neighborhood “Treasure Hunt.” 10 neighbors put clues on their doors. Each “clue” was a riddle with fun questions and at the end of the question it directed the participants to the next house. At the last house there were prizes. 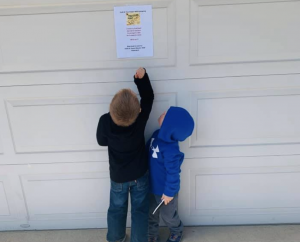 The clues were taped to the doors, and some were taped to garage doors, so there was no direct contact with people. There was a lot of waving and talking through the screen doors.

There was also a lot of interaction on the Facebook page during and afterwards with parents posting pictures of their kids enjoying the great weather, walking around the neighborhood that day. 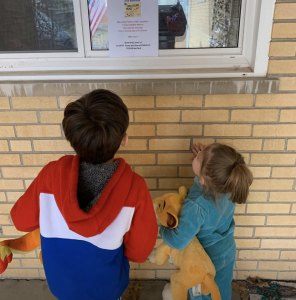 Fifteen kids took part in the Treasure Hunt and really enjoyed it. The questions were aimed at young people, with a mixture of kiddie and teen questions in there. The parents went with them and asked the questions while the kids tried to figure out the answers. 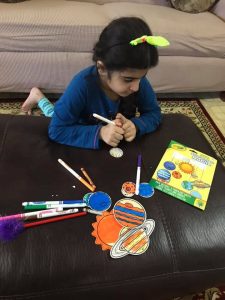 At the end of the hunt were bags of prizes. The prizes were a hodge-podge of craft kits, and other items that one family had around the house. The craft kits allowed the fun to continue once the kids got home. There are many companies that sell craft kits.

“I contacted Oriental Trading company and when I told them what I was getting them for they gave me a 15% discount, said Kara Bockius who ordered some craft kits for a future event. “I wondered if they were even still delivering and how long it would take so I called them and they were very easy to work with, saying they will mail the order out right away.”

Another activity was “Popsicle and Bubble Wand Day.”  The family who did this one set out gloves and hand sanitizer so neighbors could pick up the items without fear. they had a cooler with Popsicles in it as well as Bubble Wands sitting out on their driveway.

“I wiped down the bubble wands with sanitizer before setting them out,” said the homeowner. 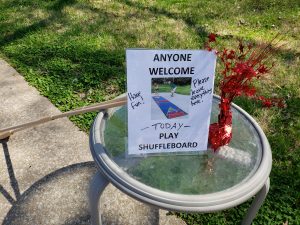 On a particularly nice day with 80 degree temperatures, one neighbor set out a shuffleboard game for anyone who wanted to to play. 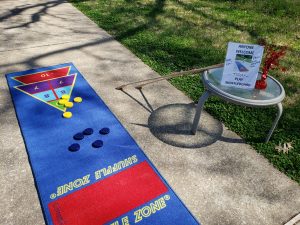 The shuffleboard was a successful idea because all ages can play it. It also requires a minimum of touching.

With shuffleboard, the only thing you need to touch is the stick and neighbors were advised to bring their gloves or something to grab the sticks with.

They post daily updates on their Facebook page promoting the activity and it gives families something to look forward to as well as it forces them to go outside and walk around the block, promoting exercise.

Future events being planned include artwork displays, craft ideas and an  They also plan to set fire pits in driveways in hopes the grown-ups can have a little interaction — while keeping the six-foot distance.

1. Neighborhood scavenger hunt- Put pictures in windows or funny things in the yards and put a sheet to hunt with on our neighborhood page. 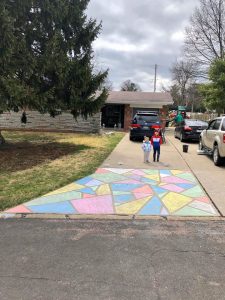 2. Chalk art “competition” when the rain finally ends. Or having the kids draw a picture in a neighboring driveway as a little surprise? Then if your house was chosen, you can do it to another house? Kind of like a tag you’re it.

3. A spring version of “booing” each other- leaving surprises on a neighbors porch- bubbles, chalk, etc for the littles or booze for adults. 🤣

4. Easter Egg Hunt– Neighbors who say they will do it put two or three eggs out for the amount of kids coming. Parents need to be sure the kids know the rule– pick up 2 (or three) eggs from each yard. 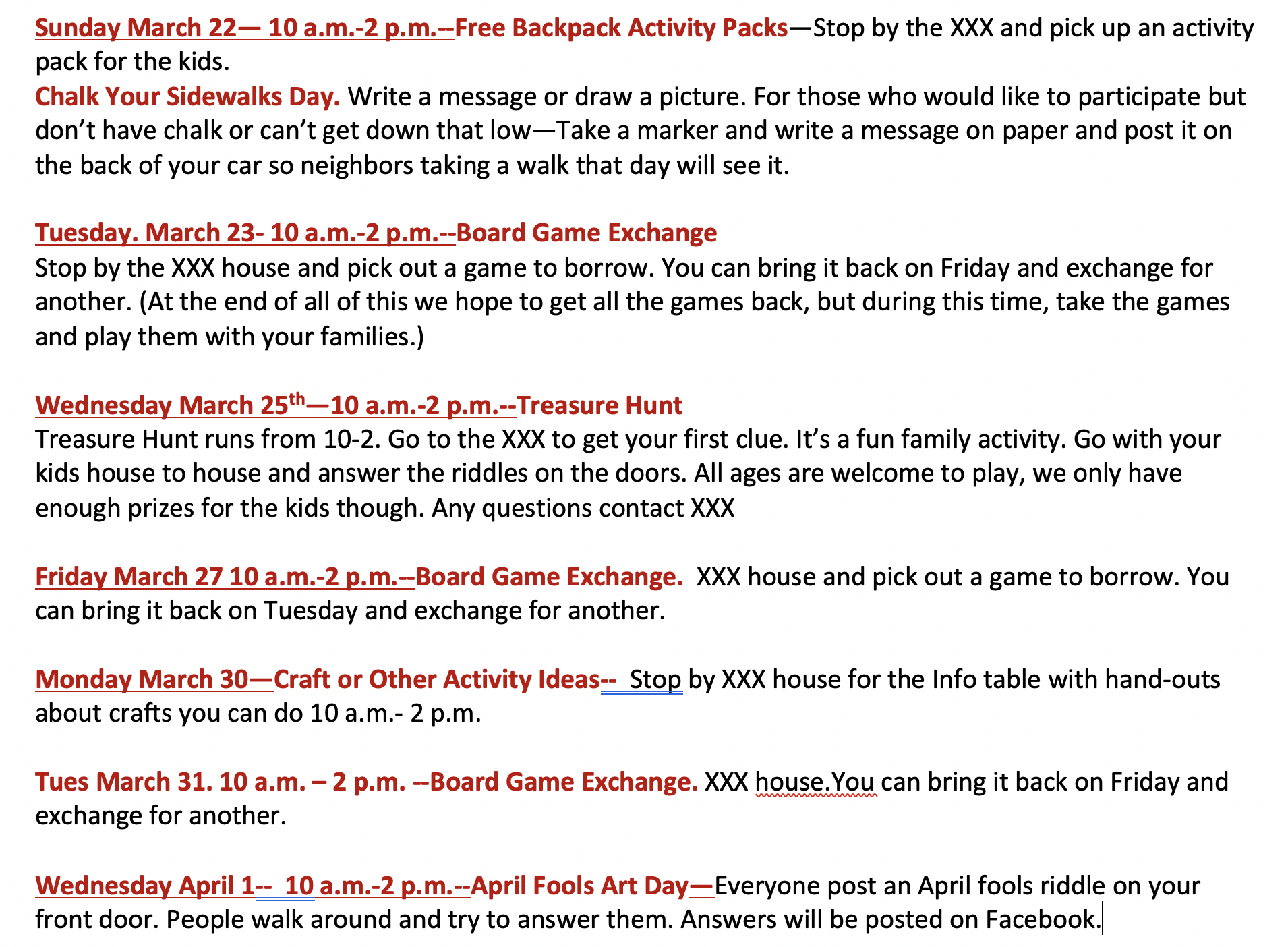