In the 1940’s Kay Million was a patient at Shriner’s Hospital in St. Louis and years later she was volunteering there, and got to meet one of her life-long heroes– in a round about way due to her dad. Fathers Day is a time to honor all dads and whether we are a child or a senior, we will never forget the impact our dads have on us.

As a young girl Kay wanted to do what her father, Jesse H. “Speedy” Collins of Springfield, Mo. did and that was sports. She was around it constantly as the legendary Collins coached basketball, football, and track at the high school level. During the pandemic when she was on lockdown, she got her old scrapbook out and all the memories came back.

“I’m a big Cardinals fan,” said the retired teacher in St. Louis County. “My husband and I had season tickets and I was lucky to meet two of the best Cardinals.  “I met Whitey Herzog because we went to the same church and Stan Musial when I worked at Shriner’s Hospital.”

She suffered a brain injury at birth, which required much medical attention. Being from Springfield, Missouri, her mother, also named Jessie and her dad took her to St. Louis for her treatment. She is shown, left in a photo with her brother, Jesse Herbert, shortly before her surgery.

“I was operated on at Shriner’s Hospital for cerebral palsy,” she said. “At that time I was the most successful case Shriners had performed (for that type of surgery).”

It was a good thing the surgery was a success because after a long recovery she was able to use her brain and  pursue her dream of becoming a teacher, something she did for many years in the Lindbergh School District.

“My love of sports came from my dad, Speedy Collins (shown right), who is in the Springfield sports Hall of Fame and Missouri State University Hall of Fame to name a few of his accolades.”

J. H. “Speedy” Collins (shown right in photo courtesy MSU) was added to Missouri State’s “Wall of Fame” in 2011, and when Springfield radio station Jock 98.7 did their Top 100 Southwest Missouri Athletes, Collins was on the list. Legendary Springfield sportscaster Ned Reynolds interviewed his daughter during that time.

“My dad was a career coach and teacher at Greenwood which is the lab school at Missouri State,” she said.

Collins was coach from 1924 until 1964 and guided the Greenwood Bluejays to 13 Basketball Championships. In 1942 Greenwood was the State Champion for Class B, when he coached the Boys to a 26-4 record and a Championship Victory. 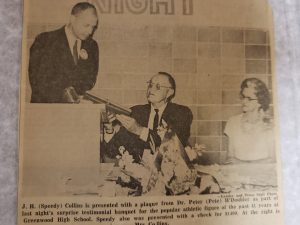 She was proud that though he excelled as a coach, he was highly admired not only for his leadership in sports, but also for teaching his players how to be a good people. The photo left shows him receiving one of his many awards, with his wife looking on.

“He coached five sports plus P.E.,” she said. “I remember he would take a player out if he showed poor sportsmanship on the field. His is in the Missouri State Hall of Fame and the Missouri  Sports Hall of Fame.  So that is why I love all sports. I was very proud of him.” 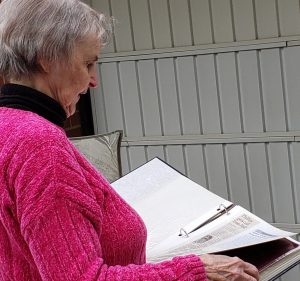 Looking at scrapbooks she has saved, it is easy to see how revered Speedy Collins, who died in 1978 was. There was a J.H. Collins Testimonial Banquet at Missouri State which is now Missouri State, in 1964, a plaque is at the Missouri Sports HOF with his name on it.

In 1996 the Missouri Senate presented his family with a proclamation (shown right) about Collins going onto the Sports Hall of Fame. There is also a proclamation from the Springfield mayor (Leland Gannaway at the time) and many newspaper clippings saved in the scrapbook. 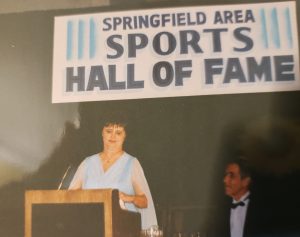 At the Springfield Area Sports Hall of Fame on 1996, Kay Million stood up and spoke to the large crowd about her father (photo shown left). That was remarkable in itself, considering her childhood surgery. While she was proud of her father– Speedy Collins, throughout his life was no doubt thankful that the surgery and time spent at St. Louis Shriners’ Hospital in his daughter’s early years was so successful, so that she could walk and go on to have a great life and career herself.

It was through the love of sports shown to her by her father that she became such a Cardinals fan, and through that surgery at Shriners that she met her other hero, Stan Musial.  It was through the example her father gave her,  that she wanted to give so much of her time to volunteerism, which in turn led her to meeting Musial.

“The majority of my sports life centers around Springfield and my dad’s many accomplishments though,” she said.  “My dad was the ‘Stan Musial’ of Springfield.” 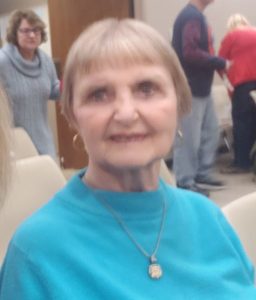 When she moved to St. Louis to teach first grade, Kay Million, grew to love the Cardinals and started attending games.

“I’ve always loved going to the games,” she said.

After a long career of teaching, she retired and decided to volunteer at the place she was grateful for as a child.

“I wanted to pay it forward,” she said, “So I volunteered at Shriners.”

She enjoyed her work with the children and was glad she could give back to the place that meant so much to her, but the added surprise to her volunteering was meeting someone else who was an avid volunteer: Stan Musial. 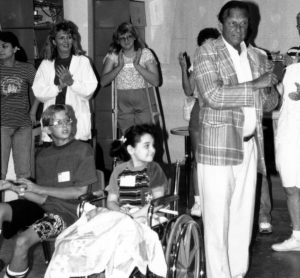 “I saw Stan Musial many times as he was always there, playing his harmonica for the kids,” she said.  “Anyone who worked at Shriners knew Stan.”

Kay Million remembered Musial smiling and interacting with the children as well as the workers. He always had a smile on his face and it raised everyone’s spirits.

He didn’t seek attention for his volunteering, he just did it, and that was something that really impressed her.

Many patients throughout the years got to be the recipient of Musial’s visits and his harmonica playing. Many of these children are grown-ups who will never forget when Stan the Man came to visit. 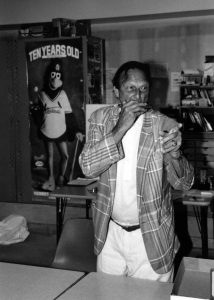 “Stan spent many hours at Shriner’s Hospital entertaining the kids with his harmonica,” she remembered. “I volunteered there for 25 years and it was always a thrill to see him.”

She is still a Cardinals fan and is sorry the season has been suspended so far due to COVID-19.

“I already had tickets for some of the games this year,” she said.  “I am hoping to still get to use them.”

She knows the chances are slim she will get to watch a game from the ballpark this year, but as with other Cardinals fans she is looking forward to some sort of baseball in the 2020 season.