With all those dogs, one can’t help but ask, why?  Not unlike the ice cream cone, the ballpark  hot dog has its share of those claiming first rights. That said, since I pledge my alliance to St. Louis, I’ll credit Chris Van der Ade.  A German immigrant who came to St. Louis via New York City,  ran a grocery and saloon, who took note how after the St. Louis Brown Stockings played, hungry fans stopped off at his store for food and drink.  Van der Ade saw an opportunity.  and brought hot dogs into the ballpark for fans to enjoy through the game.  A stroke of genius, which helped the bottom line of his  bought the Stockings in 1882, renaming the them the Browns – not to be confused with the American League St Louis Browns, which was founded in 1902.  Fact is, Van der Ade’s Browns, who would  join the National League and later undergo two more name changes, finally becoming our St Louis Cardinals. A piece of trivia that makes that Busch Stadium hot dog taste even better. 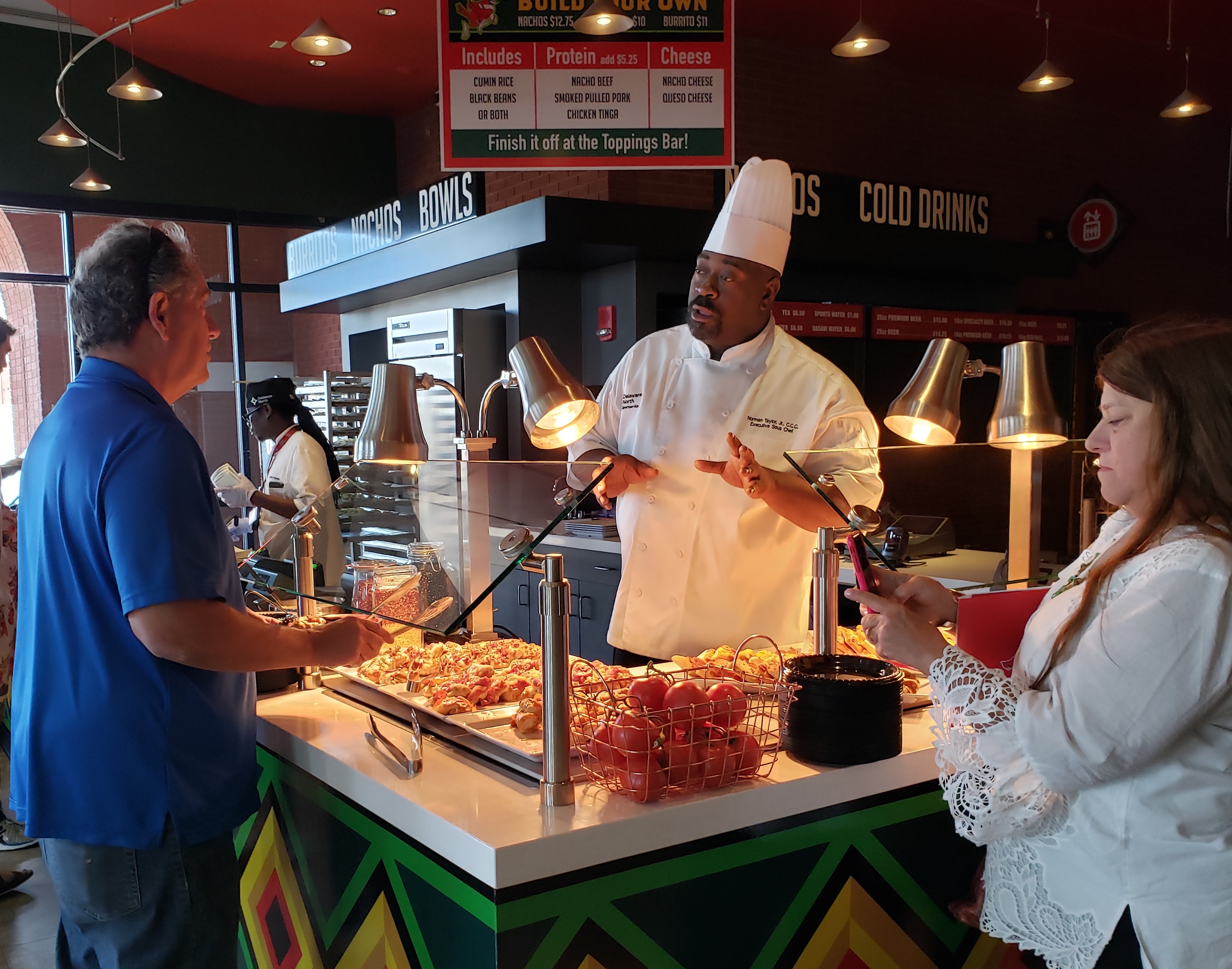 This time of year I always look forward to Chef Norman Taylor showing us all his new food for Busch Stadium– and he sometimes has hot dogs grilling. In the photo, I’m taking a picture of some of the Chef’s creations from last year as he explains it to Rob Rains.

Unfortunately, this year the grills are cold at Busch Stadium a ballgame without a hot dog just wouldn’t be the same. Which begs the question, How do you like you hot dog?  I’m a purest, I prefer my dog with yellow mustard and with sweet pickle relish.  Other prefer a more fanciful dressed dog of which  stadium chefs  have taken note.  PNC Park hawks is Pittsburgh Pirates Cracker Jack and Mac Dog. A footlong beef dog layered with mac & cheese, drizzled with salted caramel sauce and topped with deep-fried pickled jalapeños and Cracker Jack. At Kauffman Stadium there’s the Kansas City Royals Sunrise Dog. Another footlong dog topped with crumbled bacon, cheddar cheese slices, white sausage gravy and a fried egg

At Busch Stadium during the regular season over a half million dogs are sold. So, what’s the favorite beyond the classic? Over the years there has been many such as the St. Louis Dog, topped with barbecue sauce, Provel cheese and crumbled Red Hot Riplets.

Since the stadium hot dog is out of reach this season, fans will have to grill their own. And thanks, OK because nothing is easier to grill. However, according to the National Hot Dog and Sausage Council (NHDSC), there is a proper etiquette that should be followed.

Don’t – put hot dog toppings between the hot dog and the bun. Always “dress the dog,” not the bun.

Don’t – use a cloth napkin to wipe your mouth when eating a hot dog. Paper is always preferable.

Do – use paper plates to serve hot dogs. Every day dishes are acceptable. Forget the fine china

Don’t – leave bits of bun on your plate. Eat it all.

Don’t – use ketchup on your hot dog after the age of 18.Mustard, relish, onions, cheese and chili are acceptable.

Do – Condiments remaining on the fingers after eating a hot dog should be licked away, not washed.

Do  – use multi-colored toothpicks to serve cocktail wieners. Cocktail forks are in poor taste.

Don’t – send a thank you note following a hot dog barbecue. It would not be in keeping with the unpretentious nature of hot dogs. (Editor’s note: Of course, grandmother always loves thank you notes.)

Don’t – ever think there is a wrong time to serve hot dogs.