Lieferbräu Brewery in Red Bud IL is much more than just a brewery to a couple of Washington University graduates.. It’s a family enterprise that ties into everything else WashU in St. Louis alums Ray and Kara Wagner are doing.

Kara, a 2006 graduate, and Ray, a 2007 graduate, are part owners of  the family-owned and operated craft brewery located in the heart of historic Red Bud.

Red Bud is a farming community located in southern Illinois with a population of 3,700, and located 35 miles from downtown St. Louis.

“The people in Red Bud are incredibly special. This gives us a way to connect with everyone in this town,” Ray said, shown with their family in photo, left. “That is why we are comfortable being here and raising our family here.”

Kara grew up on the Liefer Farm, which is located eight miles outside of town. She has three brothers – Kent, Kirk and Kristopher – who are also part owners along with their spouses and live in Red Bud.

The brewery’s building, that dates back to 1888 and originally housed a millinery, was purchased in January of 2017, and with the hard work of family and friends the brewery opened 18 months later in June of 2018. 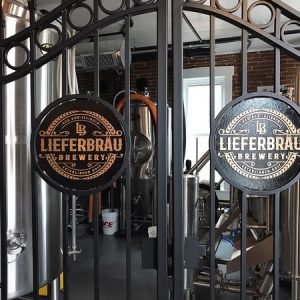 Lieferbräu Brewery embodies the same core values that have guided the progress of the Liefer family farm over four generations:

Humility of Hard Work, Pursuit of Innovation, Appreciation of Timeless Traditions, And Respect of Land and Neighbor.

Kara, a three-time All-American volleyball player at WashU, handles the finances, inventory management and hiring of staff, while Ray, who played three years of men’s basketball, assists at night and on the weekends when not working his full-time job. Ray also manages the 85+ Bourbon list, and hosts Bourbon tastings.

The brewery is one of many businesses that have come to Red Bud in the past five years, which is bringing more visitors to town and makes it a destination place. In addition, Lieferbräu Brewery has partnered with other local breweries on the Southern Illinois Beer Trail (SIBT).

“We have people from all over that have visited the brewery. We are getting Lieferbrau’s name out there through word of mouth and with our visibility on social media,” said Kara. “We want to maintain our collaboration with the community, and make sure everyone succeeds.”

“It’s really fun when people from St. Louis and other areas visit and they are so surprised,” Ray added. “They appreciate the quality of our beer, but also how much effort, collaboration and hard work has gone into making them feel welcome.”

Kara and Ray met as juniors in high school in the Fall of 2000. Kara went to Red Bud High School and Ray went to Lebanon High School – two towns separated by 36 miles.

Their first date was to Eckert’s in Belleville and as Ray said, “The rest is history.”

Kara graduated with a bachelor’s degree in mathematics from WashU, and spent the next 10 years in actuarial consulting and insurance before deciding to stay home with the kids full time.

She earned first-team All-America honors as a setter in 2004 and 2005, and was a member of the 2003 NCAA Division III National Championship Team. Kara still ranks third in school history in assists (4,522), and was a part of three Final Four and three University Athletic Association (UAA) Championship teams.

“The further away we get from graduating, the more I appreciate what we were a part of,” Kara said. “My parents helped me make a great choice and realize everyday how lucky I was to go to WashU.”

Ray received his bachelor’s degree in finance from WashU, and is a Director at Thompson Street Capital Partners, a private equity firm in Clayton.

He was a point guard for legendary head coach Mark Edwards, and was part of the 2006-07 squad that won the UAA Championship and made it to the Final Four for the first time in program history.

The WashU experience had its ups and downs on and off the court for the Wagners, like it does for most college kids. But it was the support system between the two teams that helped the couple strive at one of the strongest academic and athletic schools in the country.