“On behalf of my family,” Marecek wrote on his Twitter account, “I am sad to share the news of the passing of my father, Greg Marecek. He passed away this evening at the age of 71 from multiple organ failure. My mom, Helen, my sisters Leslie and Jennifer and I were all by his side.

“His accomplishments in sports and business are too long to list here but even more important is the love and compassion he had for his family, especially for his six granddaughters. Words can’t express how much he will be missed. Details on arrangements are forthcoming.”

“I had the opportunity to work with Greg on several television specials over the years including Cardinals Spring Training previews as well as Football Cardinals shows,” said Rob Rains. “He was always enthusiastic about his work and his productions. It was a pleasure to work with him.”

In 1998, he, along with some other investors, bought 590 AM and 100.7 FM KFNS and Marecek’s contributions with KFNS had a big impact on St. Louis’ sports talk radio.

Marecek also spent time in the newspaper business as the sports editor of the Suburban Journals Newspapers and he wrote several books.

He was very involved in every aspect of St. Louis sports for a long time, having founded four companies, three sports marketing, including nationally known SNI Sports Network. He did play by play for several teams and owned the broadcast rights to many teams. He developed the St. Louis Sports Hall of Fame inclusive of all sports covering metro St. Louis and Southern Illinois.

“Greg did a lot for sports in St. Louis,” said Rains. “Our hearts go out to his family. Prayers to his wife, and our friend Helen as well as John, Leslie and Jennifer.”

John Marecek said that in lieu of flowers his family requests donations to be made to the Alzheimers’ Association and the Lutheran Church of Webster Gardens. 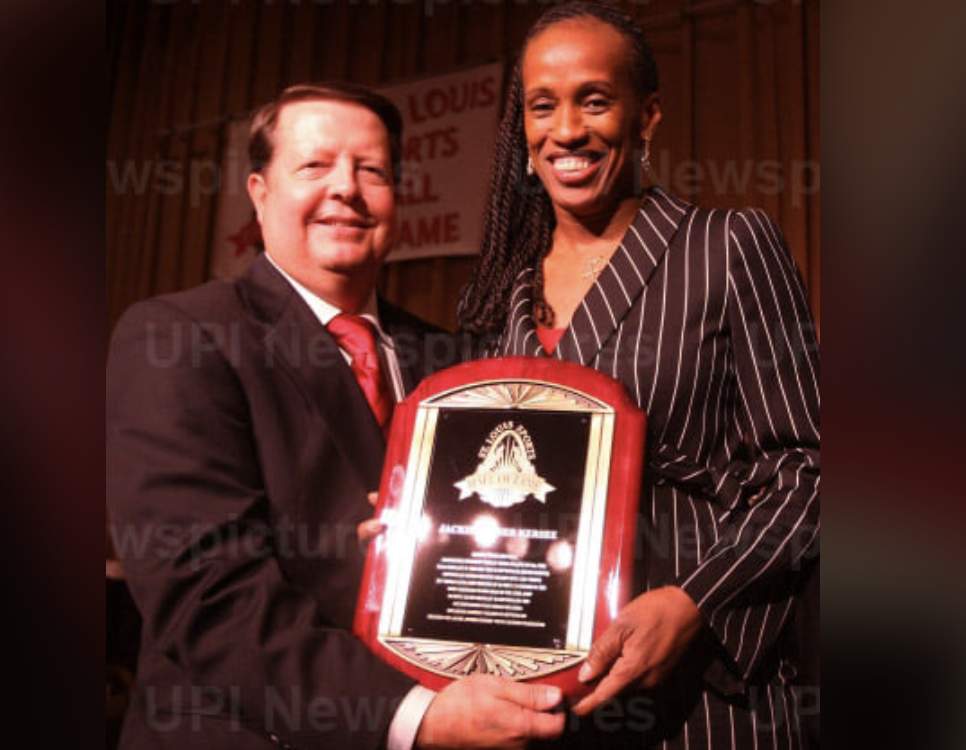 Photo of Greg Marecek and Jackie Joyner Kersee at the St. Louis Sports Hall of Fame Dinner, by Bill Greenblatt.

Over the past several decades, he produced television programs for the St. Louis Cardinals, The Big Eight Conference, the PGA tour, among others.

In 1993 he founded Spirit Sports and produced programs for CBS television and the NCAA. In 1998, he along with a group of investors, purchased radio station KFNS. The station changed the sports broadcast landscape of the St. Louis market.

Marecek’s greatest accomplishment and what he was most proud of was the founding of the St. Louis Sports Hall of Fame in 2009. He served as president from the beginning and was working on the next induction at the time of his death.

His passion for preserving the history of sports in the St. Louis area and honoring the top athletes was his legacy. The Hall has inducted 258 outstanding men and women at the annual induction dinners.

Greg is survived by his wife, Helen and three children, John Marecek, Leslie Marecek Thomas and Jennifer Marecek. He has six granddaughters.