These days the pandemic is causing many things to happen. One is people are coming up with new ways of doing things. Celebrities who once made personal appearances to increase their incomes are now turning to the virtual worlds and St. Louis Cardinals Hall of Fame shortstop Ozzie Smith is right there keeping up with the times. Although many were on before COVID-19 hit, the platform has definitely skyrocked since then.

For a fee you can have him record a greeting—birthday greetings seem to be the most popular. CLICK HERE to see a sample of what Smith will do for his price point of $101.  https://www.cameo.com/ozziesmith

Cameo.com is the new hot thing. Started in 2016 by three guys, Steven Galanis, Martin Blencowe, and Devon Spinnler Townsend from Chicago, Illinois, it is exploding. As of May 2020, more than 30,000 celebrities have joined the video sharing platform and several have Cardinals connections.

Clapp did a video for a person named Tom who is going through a medical crisis. He reassured Tom that he appreciates all the support he has given the team over the years and now they are right behind him. For $50 you can have Stubby Clapp on a video.  https://www.cameo.com/stubbyclapp

Former Cardinals favorite Willie McGee is also on Cameo. He opted out of being with the team so we may not see him onscreen in 2020, but those who want a greeting can contact him for a personal shout-out. For $85 you can get a recorded message or for $2.99 you can start a chat with him.

Tony LaRussa’s price is $150 for the video and if you want to chat with him it starts at $6.99. We clicked on one of his examples and there was a touching video to a person who has cancer. Their family had asked him to give him a motivational call and he delivered. https://www.cameo.com/tonylarussa

You don’t have to be a major league player or manager to be on Cameo. Cardinals stadium announcer John (The U-Man) Ulett has a page. His $25 price is a real deal compared to others. https://www.cameo.com/umanpa  Ulett puts a lot of pizazz into his birthday greetings as he has the radio background.

Tom Calhoun the announcer for the Blues will not be outdone as he has a cameo site also. Calhoun is doing his for charity. He will be glad to do the call of a Blues goal for whoever is requested.  He will announce the recipient as a “Star of the Game.”  Calhoun also provides the broadcaster oomph in is videos. For $25 you can surprise someone with a familiar voice that all Blues fans recognize and know it is going to charity.

Speaking of familiar, Adam Wainwright is probably one of the most popular Cameo requests. You can have the Cardinals pitcher send wishes to your loved ones for $150. All of the proceeds from Wainwright’s Cameo appearances go to his charity Big League Impact. https://www.cameo.com/adamwainwright

You don’t have to be a 15-year veteran to be on Cameo.com. Cardinals outfield rookie prospect Lane Thomas is on there and for $75 you can have him contact you by video. The example they have is he is sending birthday greetings to someone who shares the same birthday as he does. https://www.cameo.com/lanethomas35 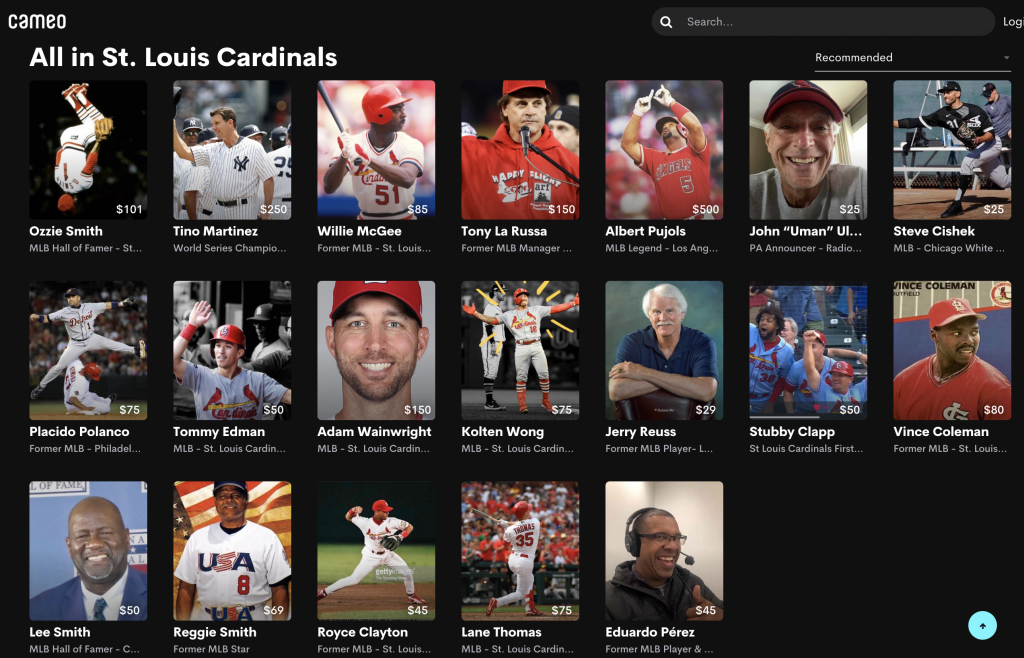 A quick check to Cameo shows that as of now Jim Edmonds is not available—however his former wife Meghan King is on there and she charges more than all the Cardinals– $199 for a message for her.

Among other “celebrities” is Brady Bunch veteran Barry Williams who will even do a Zoom call with you. For $140 he will do a recorded message but for $4.99 a minute he will video chat. He bills himself as “America’s most reliable big brother, Greg from the Brady Bunch.

The most expensive one we found was Carol Baskin who was made famous on the Netflix documentary Tiger King. For a mere $299 you can get a video done from the now Dancing With the Stars contestant. https://www.cameo.com/bigcatrescue You can also request a live chat with her for $19.99.