Eli Drinkwitz was always going to remember his first win as Missouri’s head coach no matter when it happened, how it happened or who it was against.

But what happened on Saturday assured that the first win will always be one of the most memorable wins of his coaching career, no matter what happens in the future. 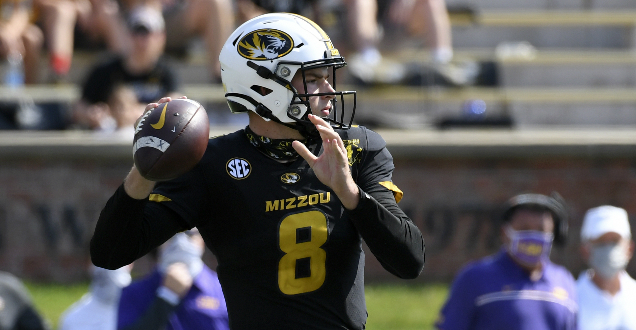 The Tigers used a brilliant performance by redshirt freshman quarterback Connor Bazelak and a goal-line defensive stand in the final minute of the game to pull off a 45-41 upset of defending national champion LSU in Columbia.

Bazelak, making only his second career start, completed 29 of 34 passes for 406 yards and four touchdowns even though Missouri was playing without three of its top five wide receivers because of COVID-19 concerns.

Six different players scored for Missouri, which got passing touchdowns of 58, 41, 21 and 5 yards and rushing touchdowns of 29 and 16 yards, plus a 52-yard field goal in compiling 586 yards of total offense. Eight players had at least one reception.

After scoring on the opening possession – Missouri’s first first-quarter touchdown since week five of last year against Troy – the Tigers and LSU exchanged scores until Missouri finally went back ahead with 5:18 left in the game.

LSU took the ensuing kickoff and marched to the Missouri 1 with 37 seconds remaining, but the defense stiffened and stopped two rush attempts and two pass attempts to hold LSU and prevent the go-ahead, game-winning touchdown.

Missouri’s defense, even though it allowed 41 points and 430 passing yards, came through when it was needed most. In addition to that game-winning stop, LSU was 0-of-10 on third-down conversion attempts. LSU gained only 49 yards on the ground, rushing for a total of one yard in the first half, when the two teams battled to a 24-24 tie. The Tigers also blocked an LSU field goal attempt.

LSU scored 17 of its points off three lost fumbles by Missouri, which each time gave LSU a short field. Myles Brennan passed for 430 yards and four touchdowns, three of them to Terrace Marshall, who finished with 11 catches for 235 yards.

Larry Rountree had his first 100-yard rushing game of the season for Missouri, now 1-2 on the season, finishing with 119 yards.

Even though the game was played in Columbia, it was technically a road game for Missouri as the game was supposed to be played in Baton Rouge but was moved to Columbia because of Hurricane Delta, which made landfall in Louisiana on Friday.

The Tigers will host Vanderbilt next Saturday.