October is the time of year for Championships. In 2020 it’s the season for competition in both sports and the political area.  Besides battling to win the White House, this month two internationally loved sports will battle it out for world championships.

The Fall is the time for Major League Baseball’s World’s Series and  the U.S. Chess Championships. While the Cardinals won’t be hosting any post-season Championships, the sport of chess will and the will be competing in St. Louis.

That’s right, the “sport” of chess. The International Olympic Committee (IOC) recognized chess as a sport as did the Missouri Sports Hall of Fame, which inductee Rex Sinquefield, founder of the Saint Louis Chess Club into its ranks in 2012.

October 2020 will mark an extraordinary chapter in American chess history, as due to the COVID-19 pandemic the Saint Louis Chess Club will host the 2020 U.S. Chess Championships online for the first time. This unique combination of the five top national tournaments will showcase competitors that best represent the past, present, and future of American Chess.

While chess has been anointed by the IOC, many people are sill surprised that it’s considered a sport. However, if you think about, the game exercises the mental muscle and requires as much strategic skill and talent as it does to make a squeeze play. Just ask former Cardinal Manager Mike Matheny, now with the Kansas City Royals. Matheny loves the game and  appreciates the benefits it gave his players. His Royals are finished for the season so he will have time to watch the Chess Championships on the television. 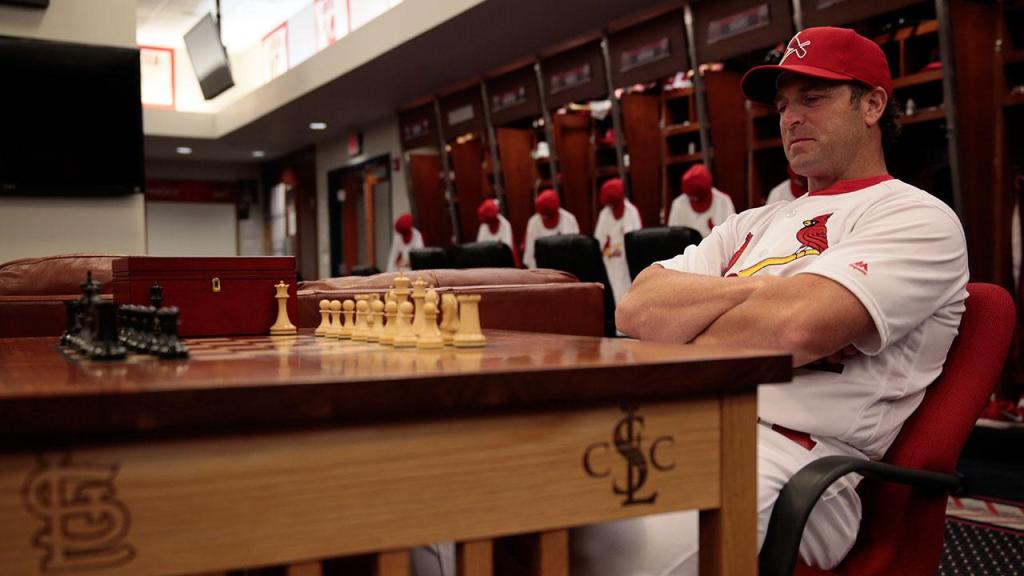 During his tenure in the  Card’s clubhouse, chess boards were brought in for the team. According to Matheny It didn’t take long for the chess bug to bite some of the players including Adam Wainwright.   As Matheny stated in an interview with Chess USA, “There are plenty of studies out there showing how great a game it is for your overall mental health, the way you think and problem solving,”

Chess can hone one’s skills to think beyond the next move to capture the win. Perhaps this is the reason why chess show ups in presidential politics. U.S. presidents through time have played, from George Washington to Barack Obama.

This is the history that fuels the exhibit “Power in Check: Chess and the American Presidency”, on display at the World Chess Hall of Fame located across from the Saint Louis Chess Club in the Central West End, now through  January 31, 2021.  The exhibit is a fun diversion during these last few weeks before the election.  Included on the exhibit a unique collection of chess sets reflecting  Civil War era sets to delightful kitschy presidential sets whose cartoon caricatures bring welcomed comic relief to the intense election season.

Admission to the World Chess Hall of Fame is free and is open daily. During the pandemic, the Saint Louis Chess Club is now open to the public from 12 PM to 8 PM everyday. In accordance with the city of Saint Louis Health Commissioner’s Order No.14, they have made updates to the building in order to help keep everyone healthy and are offering daily open chess play times. They have scheduled one-hour cleaning throughout the day. The building will be closed to the public during these cleaning times.

For more information on thee WCHOF and the U.S. Chess Championships visit saintlouischessclub.org.