This past year, Rainbow for Kids donated funds for the construction of an ADA wheelchair accessible playground at Watson Trails Park and at 2 p.m. on Tues. Oct. 27, 2020 Sunset Hills Mayor Pat Fribis and Sunset Hills Parks and Recreation Department Director Gerald Brown announced that the project is moving forward. The event was held under the pavilion next to the playground at Watson Trails Park. A gentle rain and cold temperatures lurked around but nothing could dampen the spirits of those in attendance.

In the past three years, Rainbows for Kids, a charity for families of children with cancer, received memorial donations in memory of founding members Margie and Jack Tippett. They partnered with the Whitey Herzog Youth Foundation, N.A.I.L.B.A. and others who support the charity to provide a lasting tribute that would benefit special needs children and their families. 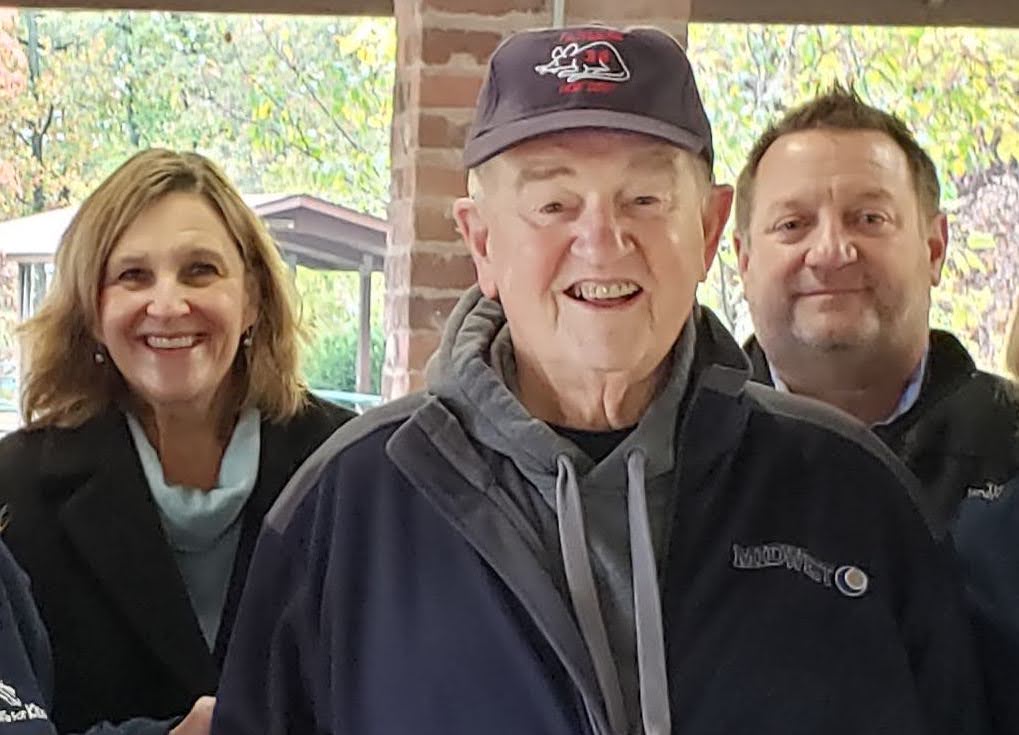 Whitey Herzog and the executive director of the Whitey Herzog Foundation, Kathy Dampier (shown with Rob Rains in the photo at the top of this story) attended the ceremony announcing the playground.

“I was happy to get involved,” said Herzog. “My Foundation usually donates to help build baseball fields, but when I heard about this I thought about it. These kids can’t play baseball, so I said ‘whatever you need, let’s get this done.'”

The Rainbows for Kids Playground in Honor of Margie and Jack Tippett will be an unique ADA playground which  allows those who use a wheelchair to remain in the chair while swinging on a special swing and riding on a special merry-go-round, thus empowering them to be able to enjoy the playground without having to transfer. It lets kids be kids and parents have fun watching them.

Brown and Fribis (shown in photo left with Herzog) were on hand Tuesday to announce the playground and to show artist renderings.

” It was amazing to see all of the partners together that made this possible,” said Brown who served brownies donated by the Sunset Hills Chick Filet to the attendees. “We had civic organizations (Rotary, Kiwanis, Foundation for Sunset Hills), private organization (Rainbow for kids) and private businesses involved (Renewal by Anderson) with the assistance of the city that made this project a possibility It was a pleasure to work with all of the organizations.”

Many of the donors listed above attended the event and gathered for a photo. 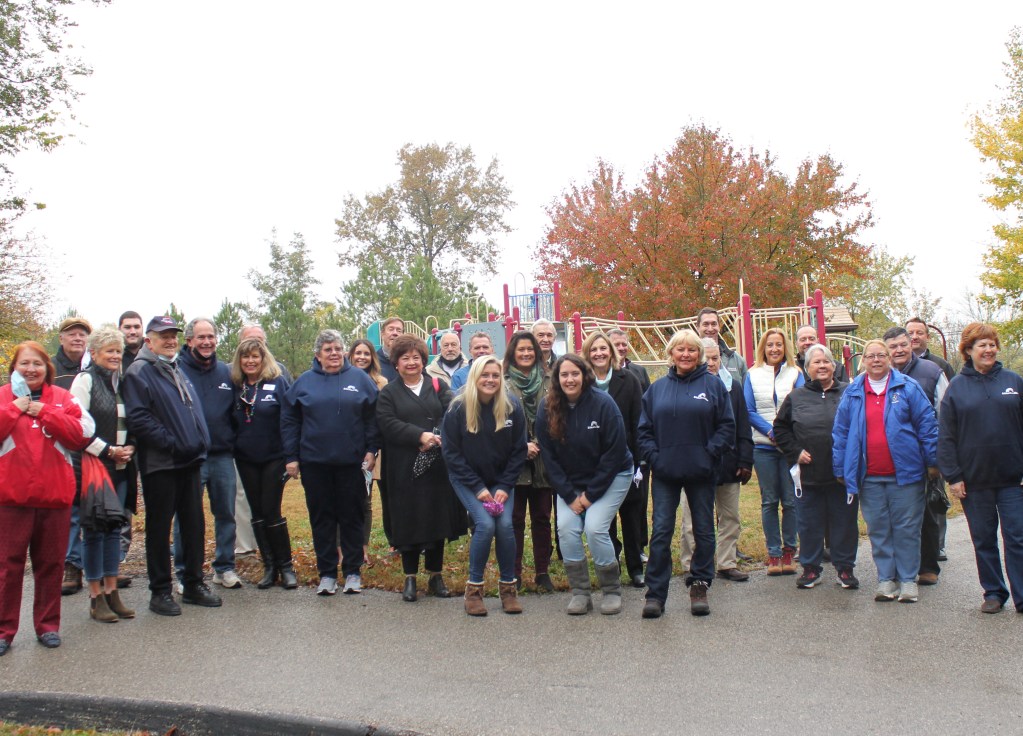 “Our first year we donated a special MRI piece of equipment to Cardinal Glennon Hospital,” said Sally Tippett Rains, volunteer executive director and one of the daughters of Margie and Jack Tippett. “We wanted to do something special for the 20th year so we got to work on raising the money for the wheelchair accessible playground. It really was a grass roots project with so many donations coming in memory of my parents who both just passed way these last few years.”

Some of the volunteers were able to attend the announcement on Tuesday. 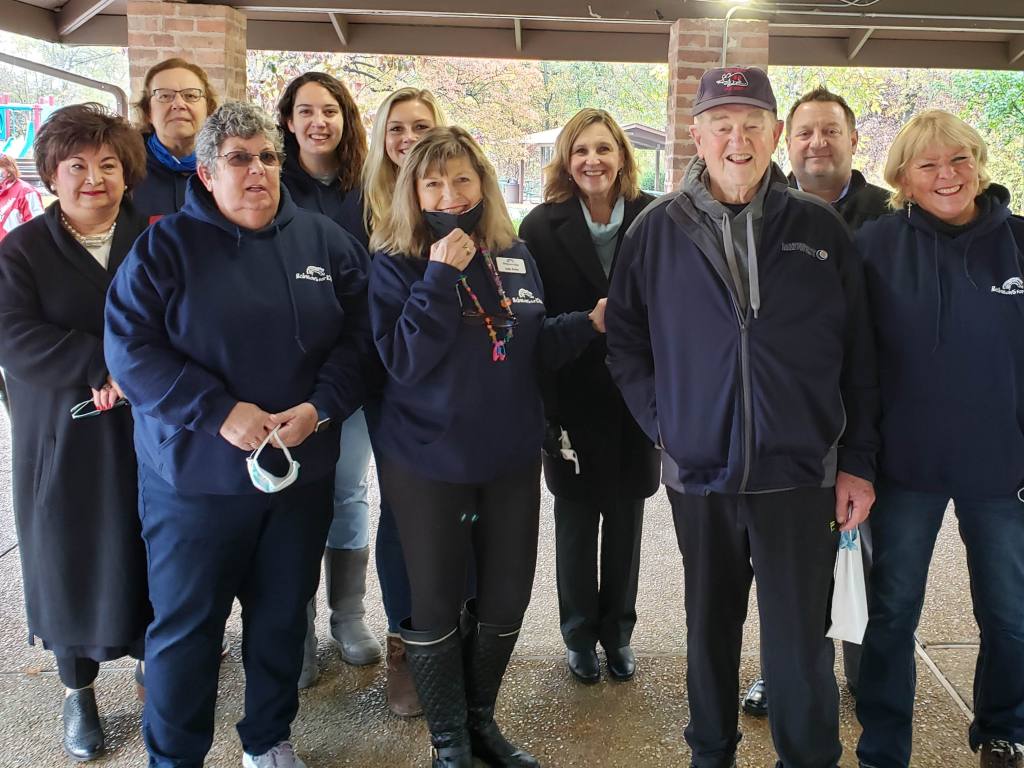 The wheelchair accessible merry-go-round will be named the “Annie-Go-Round” in honor of the Tippetts’ granddaughter Annie Schiller in whose honor Rainbows for Kids has operated for twenty-one years. 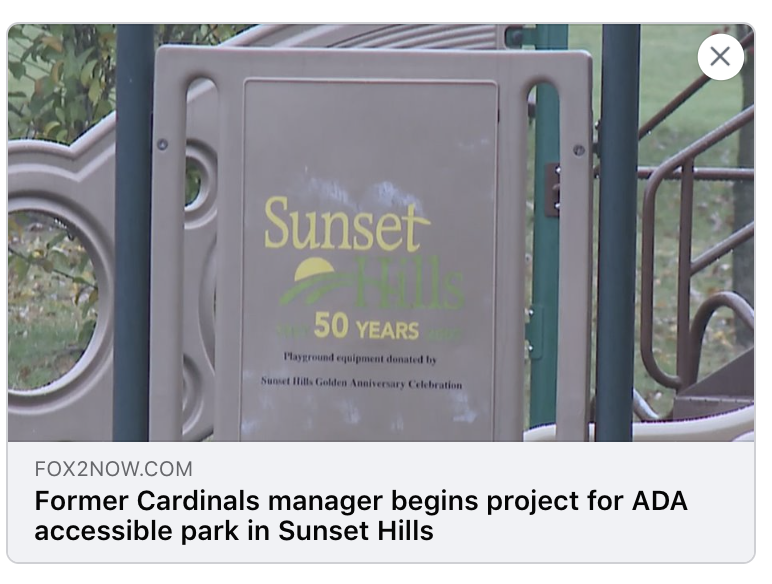 The National Association of Independent Life Brokerage Agencies (NAILBA) Foundation was one of the donors and they focus on strengthening the communities in which its members do business . The NAILBA Charitable Foundation is dedicated to providing funds to small, well-run charities, in the local neighborhoods of their members, that may not otherwise have access to additional funding, and it was due to Rainbows for Kids volunteer Alan Protzel that they were able to get that grant.

NAILBA Charitable Foundation presented Rainbows for Kids with a check for $10,000 for the wheelchair accessible playground.

“We want to thank Joanie and Alan Protzel for their support of Rainbows for Kids and Alan for leading us to apply for this grant,” said  Rains, shown in the photo as Joanie Protzel presents the check to the pediatric cancer charity.

“The N.A.I.L.B.A. Foundation has been a great supporter of Rainbows for Kids and we appreciate them very much,” said Rob Rains who publicly thanked the Foundation at the event Tuesday.

“It is an honor to continue to support our member agencies’ altruistic initiatives,” said Robin S. Landers, CLU, president of NAILBA Charitable Foundation. “Our profession has the humbling role of protecting millions of Americans’ financial and retirement security, and giving back to organizations that promote the welfare of others is a core tenet of the NAILBA community.”

ABOUT THE WHITEY HERZOG YOUTH FOUNDATION

The National Association of Independent Life Brokerage Agencies, (NAILBA) is the premier trade association promoting financial security and consumer choice in the insurance and financial services marketplace through independent, wholesale brokerage distribution channels. NAILBA advocates for America’s life, health, annuity, and other supplemental insurance distributors, and its membership includes more than 300 independent brokerage agencies who produce over $20 billion in annualized premiums. To learn more about the work of the Foundation, and the impact it has had on NAILBA members and their communities, click here.