As the time passed after the news broke that the Cardinals were in the process of trading for Nolan Arenado, team chairman Bill DeWitt Jr. kept getting text messages and phone calls asking about the deal.

Everyone had the same question.

“I’ve gotten multiple texts and calls from all generations of, ‘How in the world were the Cardinals able to get Nolan Arenado?’” DeWitt said on Tuesday. “We’re fortunate that we were able to make it happen … We got our man.”

The Cardinals acquired Arenado, generally regarded as the best third baseman in baseball, in exchange for left-handed pitcher Austin Gomber and four minor leaguers. The Rockies also agreed to send the Cardinals as much as $50 million, depending on whether Arenado stays in St. Louis for the seven years left on his contract.

The deal became official on Monday night after it was approved by Major League Baseball and the Player’s Association. It was a deal that the Cardinals were first interested in making more than a year ago, even before Arenado signed his long-term deal with the Rockies.

“We always sort of dreamed that something like this could happen or might have happened but when he signed a long term deal obviously we didn’t think anything would come of that,” DeWitt said.

What neither DeWitt, John Mozeliak or even Arenado could have predicted back then, however, was that it would not be very far along into that deal before Arenado would grow disenchanted with the direction of the Rockies and would want out.

Still, wanting to acquire a player like Arenado and being able to actually complete a trade are too far different things.

“I feel like you need a lot of patience, you need a level of persistency and you need opportunity,” said Mozeliak, the Cardinals president of baseball operations. “You also need an owner that’s willing to take a chance. This was not an easy deal to put together.

Even with the money coming from the Rockies, the trade still represents a major financial commitment for the Cardinals. It’s the largest contract in franchise history but was a move, DeWitt said, “was an opportunity we couldn’t pass up.”

Mozeliak said it was in December when he seriously thought that maybe trading for Arenado could happen, but still there were times the last two months when he had his doubts even though for the first time, it seemed that the Rockies finally had come to the realization that they had to move him.

“The last week or so I kept feeling nauseous. I just felt like something was going to go wrong. It just took a lot of patience on everyone’s side to get where we are. We’re just grateful to get to the finish line.”

For Arenado, watching as the deal took shape, there always was an odd combination of feelings; excited about the future and playing for the Cardinals, something he also had thought about for years, and what he called Monday a “bittersweet” feeling of leaving the Rockies, the team which drafted him a dozen years ago and where he grew up.

“I know this wasn’t easy,” Arenado said Tuesday during his introductory St. Louis zoom news conference. “I heard it was a grind. But I am very thankful to be a Cardinal. You heard it was getting close, but I didn’t want to jump the gun and get too excited. Once I heard it was done, I was thrilled.”

For the deal to get done, Arenado had to agree to waive the no-trade clause in his contract. There also had to be an agreement that gave Arenado the chance to get out of the contract after this season and after 2022.

He didn’t sound like a man who is thinking about that right now.

What had long attracted Arenado to the Cardinals was the team’s history of winning, the tradition and the way the fans support the players.

“I told Mo the story of when I was a rookie and we went to St. Louis,” Arenado said. “I remember Tulo (Troy Tulowitzki), the first thing he told me was, ‘Just watch the way these guys play the game and you’re going to learn something.’ He was quite right about that. They did the little things to win ballgames and that’s something I’ve always admired about this organization.

“I remember making diving stops and the fans were clapping for me like it was a home game in Colorado.”

There will be a lot more cheers for Arenado now, as soon as fans are allowed back in the stands at Busch Stadium.

Arenado is already friends with several players on the Cardinals, including Paul Goldschmidt, Adam Wainwright and Matt Carpenter.

“When you see great players you wonder how playing with them would be like,” Arenado said. “You just admire great players. I am excited to be in the locker room with them.”

Arenado also has a longstanding relationship with manager Mike Shildt. As the two talked on the telephone on Tuesday, they reminisced about the times they were together on the field in 2012 at Double A. Shildt was coaching third base as he managed Springfield, which gave him plenty of chances to talk to Arenado while he played third for Tulsa.

“We played those guys like 30 times in the course of the season and then played them in the first round of the playoffs,” Shildt said. “We were able to strike up a relationship there. What struck me, and it didn’t take a rocket scientist, was what a good player he was. He was really serious and intentional about what he was doing.

“We could still have a conversation between pitches but then he would get locked right back in. I could see this guy loves to play the game. He was super competitive. He checked a lot of boxes. He’s really dedicated to being a really good player. You could tell he wanted to win.”

Shildt was able to maintain his friendship with Arenado each time the Cardinals played the Rockies in recent years.

“Every time we played we would kind of catch up real quick,” Shildt said. “There was a clear mutual excitement on each side. There’s a relationship there that will only get stronger. 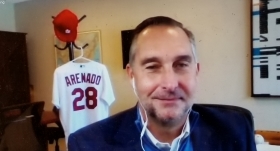 What Mozeliak knows, and has learned, about Arenado leads him to believe just as Shildt does that Arenado will be a perfect fit for the Cardinals.

“When we think about culture and the type of person we are looking to bring into the organization, there’s a couple of themes we always like to know,” Mozeliak said. “One is does he like to be around the game of baseball. You can personally Google Nolan and find him playing Whiffleball on your own. When big league players are playing Whiffleball it means they love the game.

“Then when I talked to other players about Nolan it always came back to how hard he worked, the desire to learn, a high baseball IQ. Those types of things are just very attractive to a team and knowing he wanted to be a part of the Cardinals organization is another key point. When you have a player who actually wants to be a part of something, it makes everything else that much better. What Nolan is going to find out is he is joining a club where players want to be here. They are all pulling in the same direction. Ultimately that’s what really sold us on him fitting in here.”

Added Shildt, “He likes the game. He studies the game. I’ve always said that you want the guys that when they leave the ballpark they are still at some level thinking about the game, studying the game, talking to people, watching another game, and Nolan fits that bill.”

As good a day as Tuesday was for the Cardinals, “amazing” according to Mozeliak, he also hinted that this might not be the team’s last move before spring training is set to begin in a couple of weeks. Whether he was alluding to the imminent return of Yadier Molina or something else only time will tell.

“We might not be done,” Mozeliak said. “We’re still looking at things that might transpire between now and the time we get down to Jupiter. There’s always opportunities and we’re going to continue to keep looking. But with the addition of Nolan we think we went from a good to a great team.”