JUPITER, Fla. – The most recent chapter of Austin Warner’s baseball journey was a 14-hour drive from his home in Louisville to Florida, where he and the other 32 pitchers in the Cardinals camp are going through the first days of spring training.

There was a lot of time to think, to reflect and to dream.

“I always look at my career as a ‘look how far I’ve come, but I’m definitely not done yet’ story,” Warner said. “If my career ended tomorrow, people would say I beat the odds that were against me just by making it this far. Even though I’m happy with my career right now, I wouldn’t be satisfied if this was where it ended.”

Warner’s trip to Florida, where he is one of 11 non-roster pitchers in camp, came five years after he was not selected in the baseball draft following his senior season at Bellarmine University in Louisville, at the time a Division II school.

It came four years after the left-handed Warner was pitching for a second season in independent baseball for the River City Rascals in the Frontier League, when the idea that he might be in a major-league spring training camp this week never even crossed his mind.

“I signed with the Cardinals on June 23, 2017 and if you had told me a day earlier I would be in a big league spring training camp in three or four years I probably wouldn’t have agreed with you,” Warner said. “You never give up on the dream, but it became more and more unrealistic. Every day that went by I was like, ‘I’m probably just going to play Indy ball for a couple of years and that will be it.’”

It was in front of his teammates after a game in Washington, Pa., when Warner got the news that his career was going in another direction.

“We had just lost a tough game, blowing a lead in the ninth inning. It was a devastating loss,” said Steve Brook, the River City manager. “We came in the clubhouse and guys were getting upset, throwing things, and I just said, ‘Guys this is celebration time. Austin is moving out of here, the Cardinals are taking him. We can’t take this moment away from him because we are worrying about this loss.”

“I had no clue,” Warner said. “No scouts had talked to me, there was no one I had noticed in the stands at my starts. I was completely caught off guard. But after it happened it was like, ‘OK here we go.’”

Warner knew all too well the odds that were against him. He was only 5-foot-11 and did not possess a prototypical pitcher’s body. He had gone undrafted out of high school, after his junior year in college and as a college senior, when he also did not draw interest from organizations as a free agent. His only path to professional baseball was through an Independent league team.

The Rascals, and then the Cardinals, gave him what he needed – a chance. It was up to him what he made of it.

“You are going to get a million chances if you are a first-round pick versus an independent ball sign,” Warner said. “I felt like I had to be almost perfect. I saw other guys come out of Indy ball and last a month or two just because they weren’t being great; they were just an average minor-league player. When a team doesn’t have a whole lot invested in you all they are saying is, ‘Here’s your opportunity, run with it.’”

Warner made his first appearance in the Cardinals organization five days after he signed, for the rookie level Gulf Coast League Cardinals. He drew his first starting assignment two weeks later. He found himself in Peoria just two weeks after that.

In 2018, Warner’s rise continued – from Palm Beach, to Springfield, to Memphis. He became an All-Star in the Florida State League and the Texas League. Thirteen months after he signed with the Cardinals, after 29 starts, Warner found himself starting a game for Memphis. 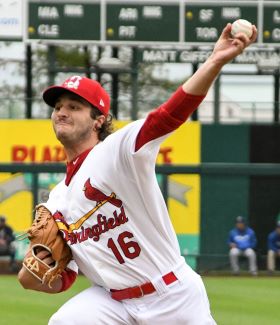 Warner split the 2019 season between Springfield and Memphis, and thought he was a candidate for a spring training invitation a year ago, which did not happen. After the pandemic canceled the minor league season, he went home to Louisville, kept throwing bullpens and helped out a friend mowing yards to make some extra money.

He was invited to spend a couple of weeks last September in the alternate site camp in Springfield and believes how he threw in a couple of bullpen sessions led to his invitation to the Cardinals camp this spring.

That call came when he was in Panama, where through a connection with Springfield pitching coach Darwin Marrero, Warner was able to join the Panama team in the Caribbean Series.

“It was a cool experience,” Warner said of his first trip to both Panama and Mexico. “It was my first competitive baseball game in about a year and a half. It felt great to just walk out on the field really.”

Warner feels the same way now about being in the big-league camp.

“It just seems like another step for me, obviously it’s a good step forward,” said the 26-year-old Warner. “It’s nice to be recognized. I felt like I deserved to go in 2020 but it just didn’t work out that way. That’s OK.”

It wasn’t the first time Warner thought he had been overlooked. He just hopes it’s the last time that happens.

“Sometimes it just feels like maybe you are a little better than you are being given credit for,” he said. “That’s not something that ticks me off but it does give me a little extra push. It is frustrating sometimes when you don’t feel like you are getting what maybe you deserve.”

Brook believes that attitude has been part of the reason for Warner’s success, even when he was pitching for the Rascals.

“He needs to maintain that kind of an, ‘I’ve got nothing to lose attitude,’” Brook said. “Even when he was with us he was like, ‘I’m pitching at a higher level now than I’ve ever been at and I’m showing that I can compete against Double A and Triple A hitters,’ which he faced every night in our league.

“He has to not put that pressure on himself of high expectations. He needs to push forward with the mindset that ‘I’ve got nothing to lose. I’m going to come out and just show everybody that I deserve to be here.’ If he keeps that mindset he will have success.”

Larry Owens, who coached Warner for three years in college, also has seen Warner’s rise – and the obstacles he has had to overcome to even earn the spring invitation.

“The knock on him is the first thing you see, his size,” said Owens, who spent seven years as a pitching coach in the White Sox farm system. “He’s not going to dazzle you with his size. You don’t see a lot of guys of his size and stature pitching in the big leagues. But if you never give anybody like him a chance then there never will be.

“It’s a cool story to me. He wasn’t drafted, he’s undersized, he’s got everything going against him but still my God, in a calendar year he went from Independent ball to Triple A. I just look at him as the underdog. He’s kind of overcome a lot of odds.”

So what does Warner see as the secret to his success? 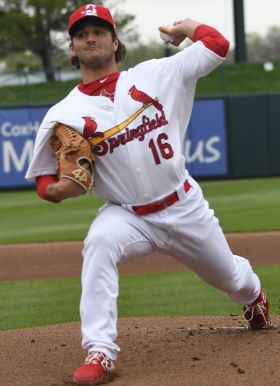 “I think I pitch,” he said. “I don’t have incredible stuff like a 95 miles per hour lefthanded fastball. I’m 90-92 for the most part. I move it well, I spin it well, I have two good breaking balls and a changeup. I mix up the counts, it’s not ‘here’s a first pitch fastball.’ You might get a changeup. If I go 1-0 you might get another changeup. I have to throw all of my pitches for strikes. I can’t just be saying I have to throw a fastball because it’s a 2-0 count. I have to have command, control the count and control the game.”

There was a time when Brook wondered if Warner could do that. It was the day of his tryout with the Rascals.

“His first couple of pitches were very wild, erractic,” Brook said. “I’m a command guy. I love signing guys who throw strikes. I don’t like guys who are all over the place. You can’t compete like that. After his first few pitches, I had our assistant coach stand in the box, and he (Warner) locked it in and threw strikes. I said ‘OK, let’s give him a shot.’”

Warner’s salary in the summer of 2016 with the Rascals was $600 a month. He is earning more than that each week in the big league camp through the daily per diem allocations paid out to the players.

Warner intends to use his time in the big league camp over the next month to watch and learn. His background might come up, but Warner knows that at this point in his career, his background won’t determine his future. Whether he will one day pitch in the major leagues in the regular season will be the result of his performance.

“I still have the dream,” he said. “Once I started progressing through the system it became a lot more real. There’s always more work to do, and a lot more to add to my story.”