JUPITER, Fla. – The most prominent newcomer to the Cardinals camp among position players, Nolan Arenado, will take part in his first official workout of the spring on Monday.

While Arenado needs no introduction to the Cardinals fans, the other 11 new arrivals are not as well known. Arenado and catcher Ali Sanchez are the only players new to the team who are on the 40-man roster, with the rest in camp on a non-roster basis.

Here is the rundown of who is joining Arenado in the spring camp for the first time:

Conner Capel – A left-handed hitting outfielder, Capel was one of the players acquired from the Indians in the 2018 trade for Oscar Mercado. Capel, 23, spent the bulk of the 2019 season at Double A Springfield, hitting a combined 11 homers for the year. Capel is the son of former major-league pitcher Mike Capel and played 27 games last summer for an independent league team in Texas coached by his dad and Roger Clemens, who was his college teammate at Texas.

Tyler Heineman – The Cardinals signed the veteran catcher as a free agent in November, but he is already familiar to some in the organization. He played for Stubby Clapp for one season in the minors in the Astros organization, when Jeff Albert also worked there. Heineman, 29, also is friends with Jack Flaherty and has caught him often in their winter workouts. He played 15 games for the Giants last season.

Scott Hurst – The top pick by the Cardinals (third round) in the 2017 draft, Hurst split the 2019 season between Palm Beach and Springfield. The right-handed hitting outfielder struggled offensively, posting a combined .217 average after hitting .295 at Peoria in 2018. Hurst, 24, is a product of Cal State-Fullerton.

Max Moroff – The Cardinals signed the 27-year-old infielder as a free agent in December. A switch-hitter, Moroff has 104 games of major-league experience, mostly for the Pirates, and played 20 games for the Indians in 2019. Most of his experience has come at second base, but he also has played some at shortstop and third base. Moroff spent the 2020 season at the Mets alternate site camp. 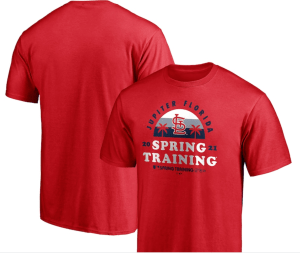 Lars Nootbaar – A left-handed hitting outfielder, Nootbaar was the Cardinals’ eighth-round pick in the 2018 draft out of USC. He moved up three levels in the system in his first full season in the minors in 2019, going from Peoria, to Palm Beach and then Springfield. At Double A, Nootbaar hit .269 in 33 games. Nootbaar, 23, is one of five players from the 2018 draft class in camp, joining Nolan Gorman, Griffin Roberts, Luken Baker and Justin Toerner.

Delvin Perez – The Cardinals’ first-round pick in the 2016 draft, Perez was invited to the big-league camp this spring for the first time. The shortstop has struggled to hit throughout his career, posting a combined .252 average in his four minor league seasons. Perez, 22, spent the 2019 season at Peoria but was not invited to the Cardinals alternate site camp last summer during the canceled minor-league season. The Puerto Rico native hit .269 for the Chiefs, his highest average since rookie ball.

Kramer Robertson – A product of LSU, Robertson has been in the Cardinals system since he was selected in the fourth round of the 2017 draft. Robertson, 26, split the 2019 season playing shortstop for Springfield and Memphis, when he hit a combined career-high 11 home runs to go along with 14 stolen bases even though he posted just a .231 average in 123 games split between the two levels.

Jose Rondon – Rondon was signed as a free agent in December and will come to camp competing for a spot on the roster as the backup middle infielder. Rondon, who will be 27 in early March, has 106 games of major-league experience, mostly for the White Sox. He spent 2020 in the Baltimore system but did not appear in a game for the Orioles in the shortened season. A right-handed hitter, Rondon has played second, third and shortstop. He has just a .201 career average in the majors but did hit 18 homers for Triple A Charlotte in 2018.

Ali Sanchez – The defense-first catcher was acquired from the Mets for cash considerations a week before spring training began. A native of Venezuela, the 24-year-old Sanchez had previously been scouting by team executives Moises Rodriguez and Matt Slater. Sanchez appeared in five games for the Mets last season. In six minor-league seasons in the New York organization he posted a .259 average. Sanchez and Heineman are expected to split the catching duties at Memphis this season, with prospect Ivan Herrera getting regular duty at Springfield.

Matt Szczur – The newest addition to the camp roster, Szczur signed as a free agent on Feb. 14. The 31-year-old right-handed hitting outfielder has logged 363 games in the majors in his career, mostly for the Cubs, but last appeared in the majors in 2018. He spent most of the 2019 season playing in Triple A with the Diamondbacks. Szczur signed with the Phillies after that season but was released last June.

Justin Toerner – The 24-year-old Toerner, a left-handed hitting outfielder, was selected in the 28th round of the 2018 draft from Cal State-Northridge. He split the 2019 season between Palm Beach and Springfield, hitting a combined 11 homers and posting a .253 average. Toerner hit only one homer in his first pro season in 2018, when he jumped from State College to Peoria and then to Palm Beach.

Photo of Jose Rondon by AP courtesy of KSDK Sports