JUPITER, Fla. – When Dylan Carlson came to the Cardinals major-league spring training camp for the first time, his locker was tucked into a far corner of the clubhouse and his uniform number, 91, reflected his status.

Carlson was a prospect, but he was still a long way away from playing in St. Louis.

Last spring, the placement of Carlson’s locker – in the middle of a row of veterans, next to catcher Matt Wieters – showed how far he had progressed in a year. His uniform number dropped from 91 to 68.

When Carlson showed up for the first official full-squad workout of the spring on Monday, he did so with the knowledge that he is projected to be a regular in the Cardinals’ outfield this season. The uniform number, 3, he was given when he made his major-league debut last August was hanging in his locker.

His status, number, and locker location might have changed, but at least one thing remains the same for Carlson as it was in that first spring camp two years ago – his attitude.

“Honestly to me, I look at it the same exact way, just to try to get better each and every day,” Carlson said. “From the first time I came to camp, I thought in my head I was going out there to try to win a job, even though it probably wasn’t obtainable back then.

“That was just my mindset every day. That allowed me to get better and make the most out of each opportunity. I still go in there with that same mindset – to try to get better each and every day.”

It was the 22-year-old Carlson’s performance in the later part of the shortened 2020 season that elevated him to the ranks of a projected starter, a position that was only strengthened when the Cardinals traded Dexter Fowler to the Angels.

After struggling in the early days of his major-league debut, hitting just .162 in his first 23 games, a short reset at the Cardinals’ alternate site camp allowed Carlson to clear his head and alter his approach – getting back to what he has done all his life.

In the final 12 games of the season, Carlson posted a .278 average with two homers and 11 RBI. He found himself hitting cleanup in the first-round of the playoffs against the Padres, something only two players in franchise postseason history at done at the age of 21 – Stan Musial and Albert Pujols.

“Obviously you could tell in my performance that everything started speeding up on me a little bit,” Carlson said of that first stint with the Cardinals. “I just got away from being myself. I came back up really focused on controlling the things I can control and playing the game I know how to play – go out there and have fun.

“When you come up you hear a lot of things and a lot of people are passing along great information. You’ve got to process what works for you and understand you still have to do the things that got you there. You can’t just change them.”

What got Carlson to the major leagues are the same tools that have earned him almost universal acclaim as one of the best prospects in the game coming into this season — with the ability to hit for power, hit for average, steal bases and play outstanding defense at any of the three outfield positions. Because of the rules changes adopted because of the shortened season, Carlson retains his rookie status going into this year.

As has been his philosophy ever since he signed out of high school, Carlson isn’t going to worry about what anyone else expects him to do this season. He knows his own expectations are what drives him.

Normally in the winter, Carlson has returned home to Elk Grove, Calif., just outside of Sacramento, and spent the off-season working out with friends J.D. Davis and Dom Nunez – who also happen to be professional baseball players.

The list of Elk Grove alumni currently in the majors is six players deep with Carlson joining the ranks along with Davis, with the Mets, and Nunez, on the Colorado Rockies. The group also includes Derek Hill, Nick Madrigal and Rowdy Tellez. The group also has something else in common – all were coached in high school by Jeff Carlson, Dylan’s dad.

Because of the pandemic, however, that group was scattered this winter and Carlson found a new facility where he worked out – and prepared as hard as he ever has for an upcoming season.

“It was real productive,” Carlson said. “It was a little different, real concentrated, focused. I took a big interest in my mental game, as well as physical, trying to get stronger. The place where I worked out, we went through a lot of physical assessments and built a plan around it to get better. We attacked things I needed to get better at.”

Carlson’s work on the mental side of the game included reading books and watching videos – trying to really understand who he is as a player by “diving into the numbers to see areas or tendencies, different things to try to understand what makes me good and things I can get better at. The team lets me know what they think and obviously I have my own thoughts. It’s definitely something I am conscious about.”

Carlson is eager to get on the field, even in spring training games, and see how he can transfer the knowledge he gained last year, and over the winter, and use it to his benefit.

“For me last year was a big learning experience,” he said. “I got exposed to this level and the way we do things at this level. For me being comfortable will only help.”

For some young players, receiving all of the hype and buildup – and Rookie of the Year projections – would get in their heads and have a negative effect on their performance.

Manager Mike Shildt already has been around Carlson long enough to know that he doesn’t have to worry about that with him.

“It will be more of a friendly reminder to Dylan to not try to do too much,” Shildt said. “He’s a pretty even keel guy. That’s a conversation that will take place, it’s a conversation with a lot of players. Dylan’s not the only one – just try to do what you can and let your talent play.

“It will be a similar message with a lot of guys, including most of the outfielders – just go play, go be you, trust your ability and enjoy yourself. Just go play the game with passion and a competitive spirit. Dylan goes about that in the right way. It will be more of a friendly reminder that he may or may not actually need.

“He just needs to go play.” 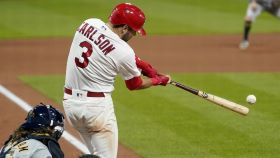 John Mozeliak, president of baseball operations, said what the Cardinals want to see from Carlson this spring is simply to repeat of how he played at the end of last year.

“A lot of times with young players, it really comes down to just confidence, knowing that they belong,” Mozeliak said. “In Dylan’s case, you look at how he played when he was up here the second time, you felt he knew he belonged. From that standpoint it’s not like we have threshold hurdles that he needs to cross or something of that nature, it’s just the comfort level of understanding that he is going to get an opportunity and he will have confidence when he gets that opportunity.

“He’s someone that I think over a full season is going to be a producer in our lineup. I like his style of baseball in the sense that he is someone that can hit line drives, can hit the ball out of the ballpark. A lot of times you hear that saying, ‘Keep turning the lineup over’ and he’s the type of hitter that can do that.”

In his first big-league camp, Carlson tried to soak up as much knowledge as he could from players such as Paul Goldschmidt. One of the first things he wants to do this spring is pick Nolan Arenado’s brain.

Carlson will take what he learns from those conversations and add it to his ever-expanding knowledge of the game, knowing his real goal is to be able to display everything he has learned where it matters the most, on the field.

“I’m pretty excited to get out there,” he said. “I’m expecting to do some good things.” 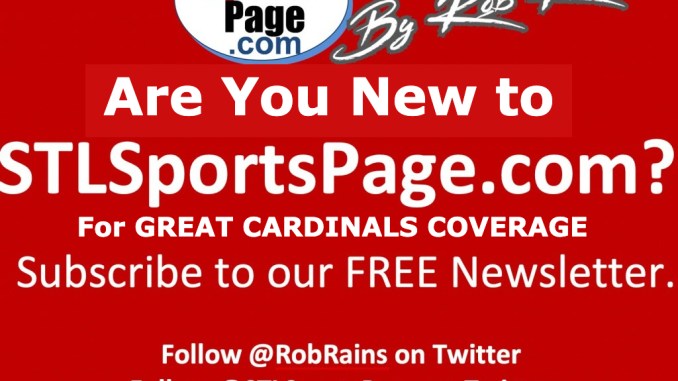