JUPITER, Fla. – Most if not all of the Cardinals regulars are expected to be in the lineup for the spring training opener on Sunday, including third baseman Nolan Arenado.

A schedule quirk that has the team without a game on Monday, the result of the revisions in response to the pandemic, led to a change from the normal pattern of previous springs when the Cardinals tried to have half of their projected starters playing one day and half the next.

Manager Mike Shildt declined to announce his lineup on Saturday, saying he had not shared it with the players.

Jack Flaherty, already named the starter for the regular-season opener in Cincinnati, will also start Sunday. Among the relievers scheduled to follow Flaherty are John Gant, Genesis Cabrera, Alex Reyes and Giovanny Gallegos.

Shildt said that unless there is a dramatic change the game against the Washington Nationals will be a nine-inning game. Teams have the option, again because of the pandemic, of playing shorter games in the first week of the schedule.

It will be the first game for the Cardinals with fans in the stands since March 12 of last year, when 6,118 fans attended the game against the Marlins at Roger Dean Chevrolet Stadium, the final game before spring training was shut down.

A crowd of about 1,500 fans is expected on Sunday, just over 20 percent of stadium capacity, to allow for social distancing. All fans will be required to wear masks.

It will be the first of 24 spring games for the Cardinals, who will try to use those opportunities to settle on a lineup that they hope will produce more offense than has been the case in each of the last two seasons.

Adding Arenado to the middle of the lineup is one move they hope will help, and getting more runners on base in front of both Paul Goldschmidt and Arenado is another, Shildt said.

There is an opening in the lineup for a leadoff hitter to replace Kolten Wong, who signed with Milwaukee as a free agent, and who wins that job will help determine who hits second.

Shildt issued his annual spring warning about not trying to read too much into the lineups, specifically who is batting in what spot, especially in the early portion of the schedule.

“Our lineup tomorrow is going to be somewhat representative of what we may look at during the season but candidly guys will be hitting in spots they could be hitting in for sure and also we create a lineup early on in the spring to allow our veteran guys to get their at-bats and get them out of the game,” Shildt said.

One leadoff candidate is Tommy Edman, who has hit in that spot 42 times in his career with the Cardinals, compiling a .260 batting average with a .316 on-base percentage. Edman also has started 63 games hitting second.

“The game has evolved but effectively you want somebody who is going to get on base,” Shildt said about the leadoff spot. “If you get damage out of that spot that’s wonderful. The game has gone to that. But really you want somebody there who can consistently get on and take quality at-bats that’s going to allow them to be driven in by our middle of the lineup guys who get paid to do that.”

At least to this point of the spring the Cardinals do not seem inclined to audition Dylan Carlson as the leadoff hitter.

Another cautionary note about spring offensive results is that they might not accurately predict what will happen during the season.

What Shildt said he will be looking for, especially in the early games, is whether players are taking quality at-bats.

“We want to make sure guys are going about their work and looking to make adjustments to get their timing right,” Shildt said. “We do have expectations, but we are also realistic. Players are working into their craft so it’s really just about getting on time, making sure they are taking good at-bats and starting to see the ball well and then swinging at the strike zone.

“That’s probably one of the first indicators that guys are off to a good start and put themselves in a good place to get their timing down, which can take a while. That’s all we can ask. For us this is a process-oriented deal in a result-oriented world. We understand that but if the processes are good the results typically are there. That’s really the barometer of how I look at things.”

Photo of Nolan Arenado by AP courtesy of KSDK Sports 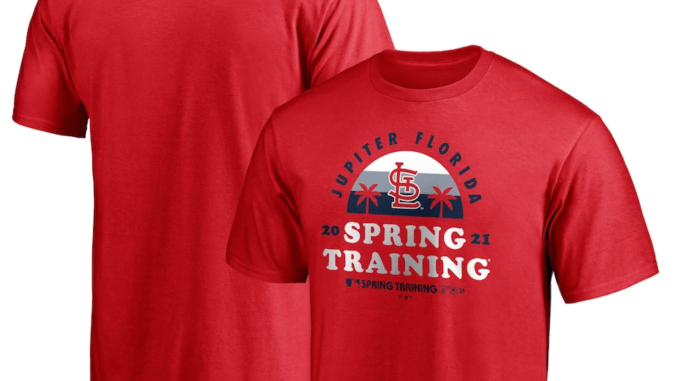