JUPITER, Fla. – Daniel Ponce de Leon has one simple wish for his new book, One Line Drive, which officially hits the shelves of bookstores on Tuesday.

“I will be happy if I can change one life, either one life who comes to God or goes to God,” Ponce de Leon said. “That’s why I wrote the book; just for one soul at least. I won’t know now, but maybe later on.”

The title of the book refers to the line drive which struck Ponce de Leon in the head while he was pitching for the Triple A Memphis Redbirds in a game in Des Moines in 2017.

Ponce de Leon said he didn’t know until the book was almost finished that 1 Line Drive also happens to be the address of the Iowa Cubs stadium.

“The title was going to be ‘Faith not Fractured’ and we had that for a while,” Ponce de Leon said. “We hooked up with a publishing company (Faith Words) and they said ‘How about 1 Line Drive as the title?’

“We said, ‘Why that?’ and they said, ‘Did you know the address of the field is 1 Line Drive?’ No way. It’s a perfect title so we changed it to that.”

The book, written with Tom Zenner, goes into detail about the near-tragic accident, the emergency brain surgery and Ponce de Leon’s recovery. There was much about that process that Ponce de Leon didn’t even know until he started working on the book.

“I was able to learn about everyone else’s emotions that I had no idea about,” he said. “I had the injury and I wanted to move on as quickly as possible so people would stop babying me and let me play baseball. I didn’t really dig deep enough or ask around about what had happened during the surgery or ask how they felt.

“Discovering that tears me up a little bit on the inside. I almost cried because people cared so much.”

Ponce de Leon’s girlfriend at the time, Jenn, now his wife, her dad and Ponce de Leon’s dad made it to Des Moines from their homes in Florida and California as quickly as possible and stayed by his side until he was well enough to leave the hospital. Jenn had the day shift, Ramon Ponce de Leon watched over his son at night.

The elder Ponce de Leon was the one who introduced his son to God and Ponce de Leon believes his strong faith played a key role in his recovery and his rise to the major leagues with the Cardinals the next year.

His faith is the reason why Ponce de Leon believes the line drive changed his life but not his career.

“I was one of the best pitchers in Triple A at the time,” Ponce de Leon said. “Soon afterward somebody got called up, John Brebbia I think, and eventually I thought I would get called up.

“As you read the story it’s not just about a line drive; it’s about relationships, about faith in God and whatever you grab out of it you can take. But when I’m on the baseball field hopefully you don’t see me as the guy who got hit in the head by a line drive but hopefully you see me for what I am as a baseball player.”

Ponce de Leon details the ups and downs of his career, beginning with when he was drafted out of high school – and didn’t even know the draft was going on. He discusses battles with coaches along the way, how he went to four colleges in four years, and even why he begged a scout from the Cardinals not to draft him. The Cardinals didn’t listen.

He talks about his offer to Jenn to quit baseball when Jenn became pregnant while he was playing in Double A.

“I had no money, zero dollars to my name,” Ponce de Leon said. “I said, ‘We’re not going to make it on this.’ I will just quit and get a job. It wasn’t worth it. I would rather be a dad. She said no, ‘We got this.’ I said OK and pressed on even harder. I never really had a plan B; just go and whatever I have do it with all my heart.”

That came a year after Ponce de Leon spent the summer he played in Jupiter living on Jenn’s grandfather’s yacht. 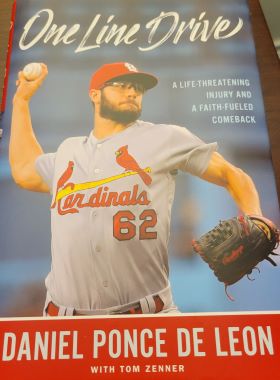 “You would think it would be nice but it was kind of tough,” he said. “Having the AC break in the middle of the summer in Florida was not ideal. I remember getting myself wet and going to sleep on the roof. I would sleep for a certain amount of time until I got overheated again and then I would go back down and get wet and go back up.

“I’ve had a lot of different experiences. I drew a straight line to the big leagues and God drew me a different line. If it weren’t for those experiences I definitely would not be the man I am today, that is definite.”

Now the father of three kids, Ponce de Leon wants his own life to reflect everything he has learned on his journey, both in baseball and in life – including some things he wished hadn’t required a line drive to the head for him to realize.

“What did I discover from the book?” he asked in response to a question. “How much time I wasted faith-wise. Why was I so lukewarm this whole time? Why was I just not all in? It makes me sad a bit.

“I want to become a complete man and be there for my wife and family. I learned that my wife needs a little more emotion out of me because as a baseball player you are taught to be emotionless. You have to find the right balance, and it’s not easy at times.”

As Ponce de Leon writes in the book, “My path to professional baseball was a winding, pothole-filled, roller-coaster ride of ups and downs that would ultimately test my perseverance, patience, confidence and faith. And, like the day I was hit in the head by that one line drive, I wouldn’t change a single thing about it.”

“One Line Drive, A life-threatening injury and a faith-fueled comeback,” by Daniel Ponce de Leon and Tom Zenner, published by Faith Words, is available on Amazon and other book retailers