As Scott Drew’s Baylor Bears Play in Final Four, it’s All in the Family For Former St. Louisan Homer Drew

Former Valparaiso basketball coach Homer Drew, who grew up in the St. Louis area, and his wife Janet, will have the unique distinction of being parents to two Division I coaches who made it to the NCAA March Madness Tournament in 2021. And one made it to the Final Four. 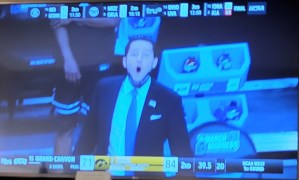 Bryce Drew, who took over as head coach of Grand Canyon University in 2020 brought his team to the Big Dance in only his first year coaching there, and Scott Drew led Baylor to their ninth appearance with him as head coach.

Baylor plays Houston at 4 p.m. CT on Saturday and the second game in the Final Four will be Gonzaga vs. UCLA at 7:30 that night. The Championships will be Monday at Lucas Oil Stadium in Indianapolis Indiana at 8 p.m. CT Monday, April 5.

Due to COVID-19, the 2021 NCAA Division One tourney used Indiana as a “bubble” and held all the games at various sites in the state. Most games were held in Indianapolis. 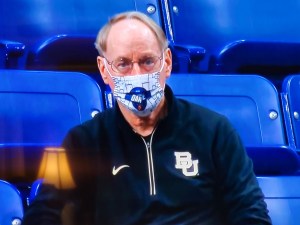 No one was as happy about that as the Drew family because Homer and Janet along with their other family members including daughter Dana Drew Shaw were able to attend games. The television coverage caught the family, especially Homer watching and he got a fair amount of screen time with the announcers mentioning his great career.

Grand Canyon’s game was at Indiana Farmers Coliseum in Indianapolis and Baylor played in Lucas Oil Stadium Unity (South) which are both in the same area of Indianapolis.

Though they were in the same town, Homer Drew said they were not allowed to get together with their sons, all they could do was wave—but that was enough. They knew they were there supporting them as always.

Previously they have had both been in tournaments at the same time, but the parents had air travel to get to see the games.

In 2017 Bryce was coaching at Vanderbilt and Scott was with Baylor when they both made it to the NCAA Tourney. Homer and Janet remember making it to both games,  taking a red-eye flight from one of the games in Salt Lake City to Tulsa to get there in time for the next son’s game. 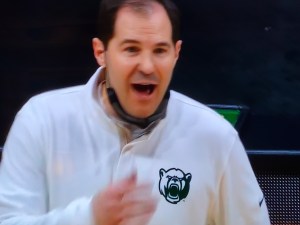 In the 18 years Scott Drew has been with Baylor, he has taken Baylor to the NCAA Tournament nine times—with four Sweet 16 berths, two trips to the Elite Eight, and now he goes into the Final Four. Bryce Drew replaced his father to take the helm of Valparaiso for five years and then was at Vanderbilt for three years  before joining Grand Canyon for the 2021 season.

They come from good stock as Homer Drew, who was inducted into the College Basketball Hall of Fame in 2019, coached 22 years at Valparaiso, led the Crusaders to seven NCAA Tournament appearances, including five consecutive from 1996-2000.  He coached Valparaiso to eight Mid-Continent Conference regular-season titles and eight conference tournament titles. He won the conference’s coach of the year award four times.

She may not have coached in the NCAA Tournament, but their daughter Dana was a standout basketball player in her own right and has her jersey retired at the University of Toledo, where she led the Rockets as a star player to three NCAA Tournament appearances. She had the distinction of having scored in double figures in every game she played at Toledo, with a school-record 1,919 career points; and then played professionally in Italy. She works as a sports consultant. 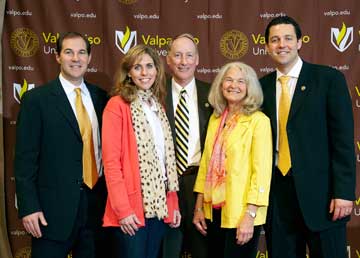 It has always been about family for the Drews as Bryce was a stand-out player under his dad at Valparaiso and both Scott and Bryce worked as assistant coaches under him.  In fact, Homer was coach and Scott an assistant at Valpo when Bryce hit “the shot”—which has become a famous moment in NCAA Tournament history. It was in 1998 when Bryce Drew’s last second three-pointer led Valpo to upset Mississippi and advanced them to the second round of the tournament. Not a tournament goes by without “the shot” being shown somewhere in the tournament television coverage.

As Homer and Janet raised their family in Valparaiso, Indiana, they had an extra wide driveway with a basketball court and at any time various members of the family used it. Janet is also athletic, having played sports in her youth. They have traveled to their kids and now grandkids games over the years.

The two older Drews are always together, even sharing a hospital stay on the same floor when both were battling cancer at the same time several years ago.

The family unit has always been important, just as their Christian faith. The kids did chores around the house. Aside from Scott who lives in Waco, Texas where Baylor is, the family all moved to Arizona when Bryce got the job so they live near each other. As Homer says, one has the basketball court, one has the pool and one has the hot tub, so they continue having family time.

After this weekend they will have even more to talk about next time they get together.