Each year we try to promote the Missouri Cherry Blossom Festival which takes place in Marshfield, Missouri. It is quite an eclectic group of people. For history lovers there are descendants of U.S. Presidents as well as other Statesmen and famous historical people. There is always quite an impressive array of these historic figure’s descendants and also historians who share their knowledge of them. Check out their website to see who is coming. CLICK HERE

One of the famous people being honored is Oscar Charleston, who played in the Negro Leagues and is enshrined in the Baseball Hall of Fame in Cooperstown, New York. His connection to Missouri is that he played for the St. Louis Stars and the St. Louis Giants. He is also the great -uncle of Lynne Jackson who plays a big role in the festival by putting on the Dred Scott Reconciliation Forum, as she is the Great-great granddaughter of Scott.

For those who love old television and the movies there will be an amazing group of stars congregated together.

The schedule is listed at the end of this article and festival-goers can pick and choose what they would like to attend. Most of the events are free to attend but some are ticketed and that is either to help bring in the big names or to help raise money for a non-profit that is associated with the  event. 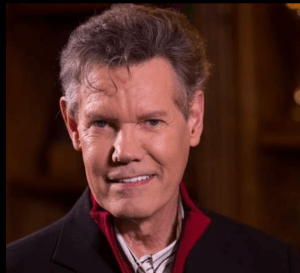 The festival kicks off Wednesday night April 21 with a concert to benefit the Randy Travis Foundation (for stroke awareness and research). Travis and his wife Mary have attended the festival in the past and will be there on Wednesday night for the ticketed event. While a stroke prohibits Randy Travis from singing, he enjoys the music and getting the chance to be around the fans.
There is going to be a special VIP party and festival goers can enter a contest to win. Want to attend Randy Travis and Lulu Roman’s Birthday Party?
Everyone who purchases a ticket for the Rhonda Vincent & The Rage concert (benefiting the Randy Travis Foundation) for Wednesday, April 21st will be entered into a drawing to attend the private birthday party, which will be held in Marshfield- prior to the concert and the meet and greet.
This party is an extremely private event and only 5 names will be drawn. Tickets are $25 per person and can be ordered at https://www.eventbrite.com/…/cherry-blossom-for-a-cause… or by calling 808-345-4075. To be entered into this drawing, tickets must be ordered by Sunday, April 18th at 11:30 pm. All individuals who have already purchased a ticket will automatically be entered into the drawing. #2021MOCBF 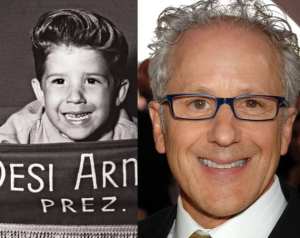 Thursday is the popular “Cherry Blossom Tea” event and this year’s guest is Keith Thibodeaux, who played Little Ricky, in I Love Lucy. Little Ricky became the most famous baby in America because Lucille Ball was pregnant in real life and had been shown in maternity clothes throughout the season.
She taped having Little Ricky (where Fred, Ethel, Ricky botched their jobs of helping her get to the hospital in a calm, organized way) and it aired while she was out having her real son.  Thibodeaux will talk about his time on the long-running comedy, working with one of the most beloved stars in television history.
After the tea on Thursday at 3:10 p.m.  at the Marshfield Assembly of God will be “Legends of Television and Screen” PanelFeaturing actors and actresses from several classic television shows and cinema classics- Kami Cotler (The Waltons), Trina Parks (James Bond, Diamonds are Forever), Charlotte Stewart (Little House on the Prairie), Rebecca Holden (Knight Rider), Karolyn Grimes (It’s a Wonderful Life), Max Gail (Barney Miller), Geri Reischl (The Brady Bunch) and others. Moderator, Tammi Bula (The Waltons). 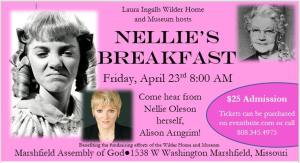 Friday morning starts out bright and early with a special breakfast featuring  Alison Arngrim, who played mean old Nellie Oelson on Little House on the Praire.  This is a ticketed event and the proceeds will go towards the Laura Ingalls Wilder House in Mansfield, Mo.
To reserve tickets to the Nellie’s Breakfast event call (808) 345-4975.
The festival has added an autograph area in the last few years. The following actors will be there to meet fans, sign autographs and sell books if they have one. Bring your pocketbooks because there are charges for everything– except looking– but it’s a lot of fun to see all the television stars and some from the movies of the great shows of yesteryear. 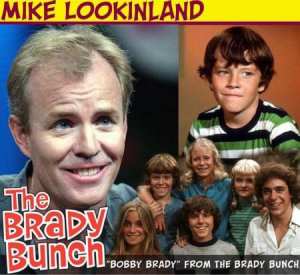 One of the stars who will be appearing at the festival is Mike Lookinland, who played Bobby Brady on The Brady Bunch. Lookinland played the youngest Brady child of Carol and Mike Brady. His counterpart was Cindy Brady, played by Susan Olson.
And speaking of The Brady Bunch, Geri Reischl, who played Jan Brady after Eve Plumb left the show will be there also.She has been known as “the fake Jan” over the years and she played in nine episodes after Plumb left to pursue a career in movies– which she did do by starring in “Dawn: Portrait of a Teenage Runaway.” 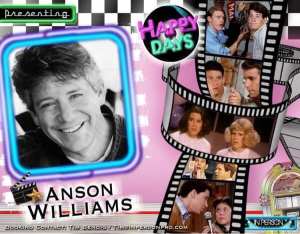 Anson Williams, who played Potsie on Happy Days is another one of the stars coming to Marshfield. Richie Cunningham’s friend Potsie Weber was  a role for which he was nominated for the Golden Globe Award for Best Supporting Actor.
Max Gail (Barney Miller) will be a VIP guest at the 2021 Missouri Cherry Blossom Festival in Marshfield, Missouri. He is  He is best known for his role as Detective Stan “Wojo” Wojciehowicz on the sitcom Barney Miller, which earned him two consecutive Primetime Emmy Award for Outstanding Supporting Actor in a Comedy Series nomination.

Another fun guest is David Newell, who played Mr. McFeely on Mister Rogers Neighborhood will be there. Mr. McFeely was the delivery man for Fred Rogers and he would bring just what Mr. Rogers needed to talk about whatever topic was on.
Johnny Whitaker is another special guest at this year’s Cherry Blossom Festival. Whitaker played Jody on Family Affair. His character along with sisters Buffy and Cissy came to live with their Uncle Bill on the sitcom.
The first black Bond Girl– Trina Parks who starred in the James Bond film, Diamonds Are Forever will be be there as a a VIP guest.
Other celebrities who will be back for encore performances at the festival are: Charlotte Stewart (Miss Beadle, Little House on the Prairie); Karolyn Grimes (Zuzu in It’s A Wonderful Life); Alison Arngrim (Nellie Oelson on Little House on the Prairie); Kami Cotler (Elizabeth, The Waltons)
This year the festival has added some Sunday events. 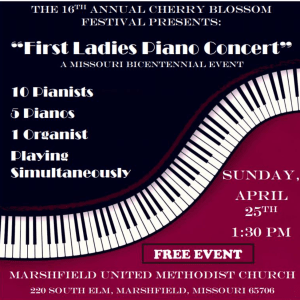 At 1:30 there will be a piano concert called “The First Ladies’ Piano Concert”.
To keep up to date about the festival follow them on Facebook: CLICK HERE
For the Cherry Blossom Festival’s website: CLICK HERE
This is the 16th annual Cherry Blossom Festival, which was started as the brainchild of the Rev. Nicholas Inman who had lived in Washington, D.C. and worked as an intern during college. He was to taken by the National Cherry Blossom Festival that he wanted to bring it back to his hometown.
Many volunteers work together each year and since the festival started cherry trees have been planted all over the town.  The nearest lodging is at the Holiday Inn, Marshfield or you can stay in Springfield, MO which is a half hour away. They have a Drury Inn so if you use our promocode “SPORTS” you will get a discount. The Cherry Blossom Festival is well worth the trip.

6:30 PM- Fourth Annual Cherry Blossom Kick-Off Concert, “Cherry Blossom for a Cause” benefiting the Randy Travis Foundation. Rhonda Vincent & The Rage will perform. Isaac Kenneth will perform the preview show beginning at 6:30 pm.
Doors open at 6 pm. Lulu Roman (Hee Haw) will serve as master of ceremonies. Randy Travis WILL be in attendance.
Location: Marshfield Activity Center
Tickets: $25 per person at the door
www.eventbrite.com or call 808-345-4975

10:30 AM- Larry Cook (Presidential Historian) will speak about “First Ladies in the DAR”
Location: Marshfield Assembly of God

11:30 AM- “Little Sister on the Prairie: The Carrie Ingalls you never knew” presentation by Julie Hedgepeth Williams (Author)
Location: Marshfield Assembly of God

9 AM to 3 PM – Nostalgia Fest Autograph Show at the Marshfield Activity Center. Featuring the VIP guests of the Cherry Blossom Festival, complete with cast members from numerous classic television shows and other VIP guests. (Free Admission)12 PM to 6 PM – Vendors on the historic Marshfield

1 PM to 4 PM – Webster County Museum will be open

8 AM- Laura Ingalls Wilder Home and Museum hosts, “Nellie’s Breakfast”- Alison Arngrim (Nellie Oleson, Little House on the Prairie) will speak- The breakfast will benefit the fundraising efforts of the Wilder Home and Museum. Sponsored by Federal Protection Location: Marshfield Assembly of God Fellowship Hall Tickets are $25 per person
www.eventbrite.com or call 808-345-4975

11:30 AM- Wilson’s Creek National Battlefield Foundation Luncheon- Commemorating the 160th anniversary of the first major battle of the Trans-Mississippi Theater of the American Civil War- Ulysses Grant Dietz (great, great grandson of President Ulysses S. Grant) and Bertram Hayes-Davis (great, great grandson of Jefferson Davis) will be interviewed on stage about their Civil War ancestors and their leadership during the war.
Location: Marshfield Assembly of God Fellowship Hall
Tickets are $25 per person and can be ordered at Cherry Blossom Festival | Wilson’s Creek National Battlefield Foundation or by calling 417-849-4057

9 AM to 3 PM – Vendors on the historic Marshfield Square

10 AM to 4 PM – Webster County Museum will be open

10:30 AM- Louis Picone, Presidential historian and author will speak about his new book, “Grant’s Tomb: The Epic Death of Ulysses S. Grant and the Making of an American Pantheon.” Location: Marshfield Assembly of God

1:20 PM- “It’s a Wonderful Life Uncovered: An Inside Look at Scene Details and Curiosities You’ve Been Missing All These Years”- Presentation by author, Michael Willian (The Essential It’s a Wonderful Life: A Scene-by-Scene Guide to the Classic Film- In celebration of the film’s 75th anniversary
Location: Marshfield Assembly of God 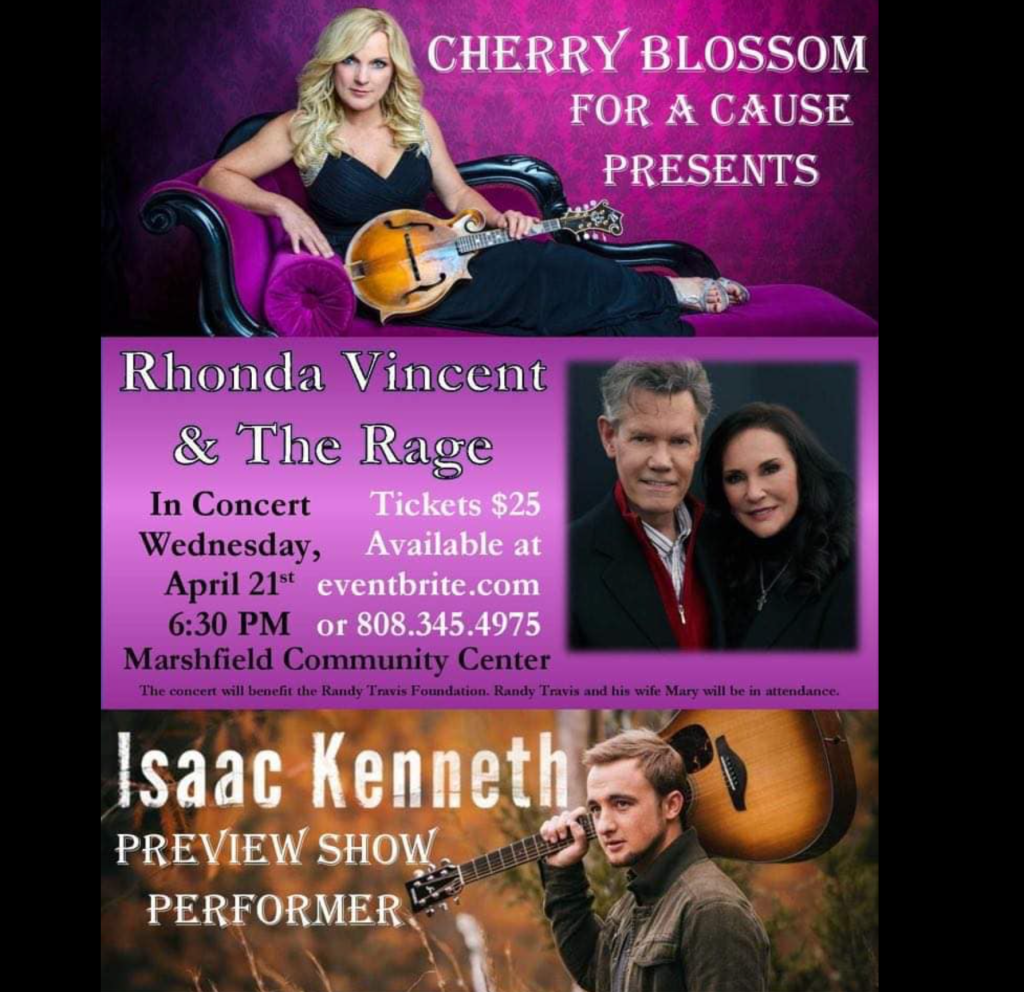