Hellen Carpenter as a child, being read to by her grandfather James Naismith, who invented basketball. (Carpenter family photo)

A little piece of history is gone after Hellen Carpenter, a long-time St. Louis resident, passed away on April 22, 2021. Hellen’s grandfather was Dr. James Naismith—the man who invented basketball. It may be hard to believe that the basketball inventor’s granddaughter was living in 2021.

In 2008 Hellen Carpenter and her husband Will, along with Rob Rains combed through documents to write a biography about her famous grandfather. She lived long enough to see the rights to that book recently bought by a well-known basketball star in hopes of turning it into a movie.

How could this be that basketball history was so long ago, yet so recent? James Naismith was born November 6, 1861, and lived to be 75 years old, dying in November 28, 1939, when Hellen was seven years old.

During the seven years she knew him, she didn’t realize he was famous. He read books to her and encouraged her in the Christian way, as his faith was something that was very important to him.

Throughout her life, until recently when she got Alzheimer’s Disease, she remembered knowing him as a child, and luckily she combined her personal memories with historical documents to preserve it for generations to come.

Dr. James Naismith and his wife Maude had five children, one of them being Hellen Naismith Dodd—  the mother of Hellen Carpenter.

Hellen was the only daughter of Hellen Naismith Dodd and Leslie Harold Dodd. She grew up with three brothers and even remembered living for a brief period of time with her grandfather. 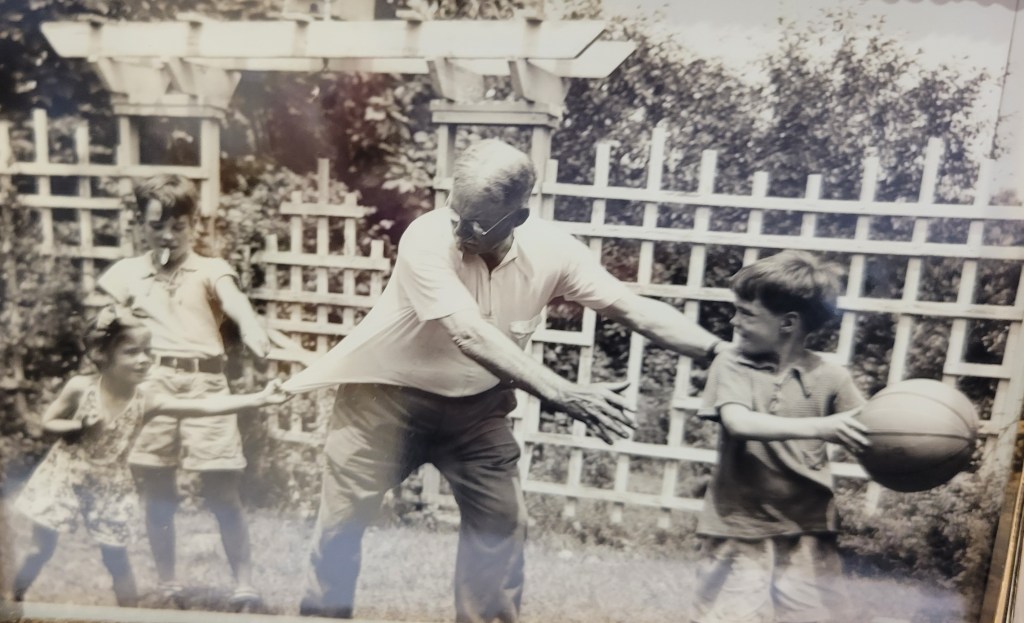 She knew of him through stories told as well as visits and phone calls as a child. He would get out and play with her just as any grandpa would do and one of their favorite games was not surprisingly basketball. The photos shows Hellen and her brothers playing with him.

She remembered her grandfather coming to visit her in 1937, shortly after her grandmother (his wife) Maude Naismith had passed away.

She remembered that he liked to travel and often had bad luck in his travels (in the form of fender benders) so his children worried when he traveled. After Maude’s death he decided to drive to St. Louis to visit his daughter Hellen and grandchildren.

One of Naismith’s sons–Hellen Carpenter’s Uncle Jack– loaned him his car. He went to St. Louis, but forgot to contact Jack to tell him he was going to keep driving and go to New York.  He was 73 at the time so one can only imagine what it was like for their family not to hear from this free-spirited man who continued on the trip all the way up to Canada before returning home to Lawrence.

Hellen Carpenter lived a normal life in St. Louis with her husband Dr. Will, Carpenter who retired from Monsanto in 1992 as vice president and general manager of the company’s New Products Division; and their two children Celeste and Will, Jr. 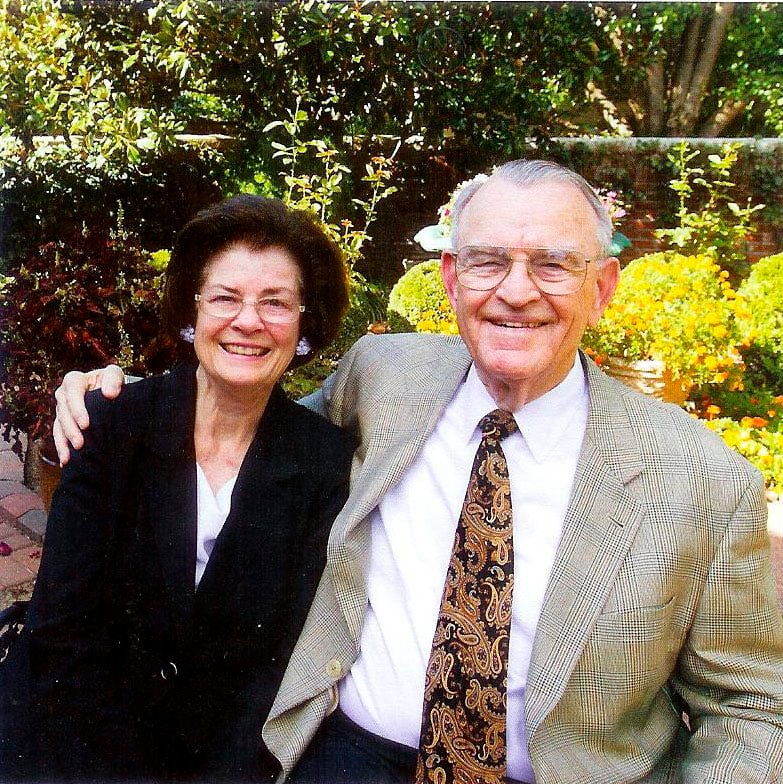 She had met Will while she was also working at Monsanto. Though raised in Fulton, MO she had moved to St. Louis to take a job in the Marketing Department at Monsanto.

Throughout their lives they were very active with UMSL and have established several scholarships there as well as scholarships at Purdue University and Mississippi State University. Education was very important to both of them.

Hellen enjoyed playing bridge and was also active in an investment club.

While she knew her grandfather well and knew he invented basketball, it wasn’t something she thought about. He was just grandpa. One day in 2007 she was looking through some boxes and  she found some treasures. It was then that she started to focus on preserving the history of her famous grandparent.

For more than forty years she had in her possession more than 300 documents from Naismith’s files and when she found them she and Will put them for sale at an auction and then contacted Rob Rains to collaborate on a book.

“Her mom was the Executrix of James Naiismith’s estate so they had a lot of things her mother (as the daughter of Nasimith) had just kept in boxes,” remembered Rains, who accompanied the Carpenters on that trip to Lawrence. “Hellen’s mother moved in with them, and they put the boxes in the basement. One day, years later she started looking in the box for a photo; and it was then she realized how much she had.”

There was memorabilia, notes about the original rules of basketball that Naismith drafted in 1891, as well as a letter that he had written his wife while he was in World War I in which he basically described what would later become the G.I. Bill, which was established after World War II. 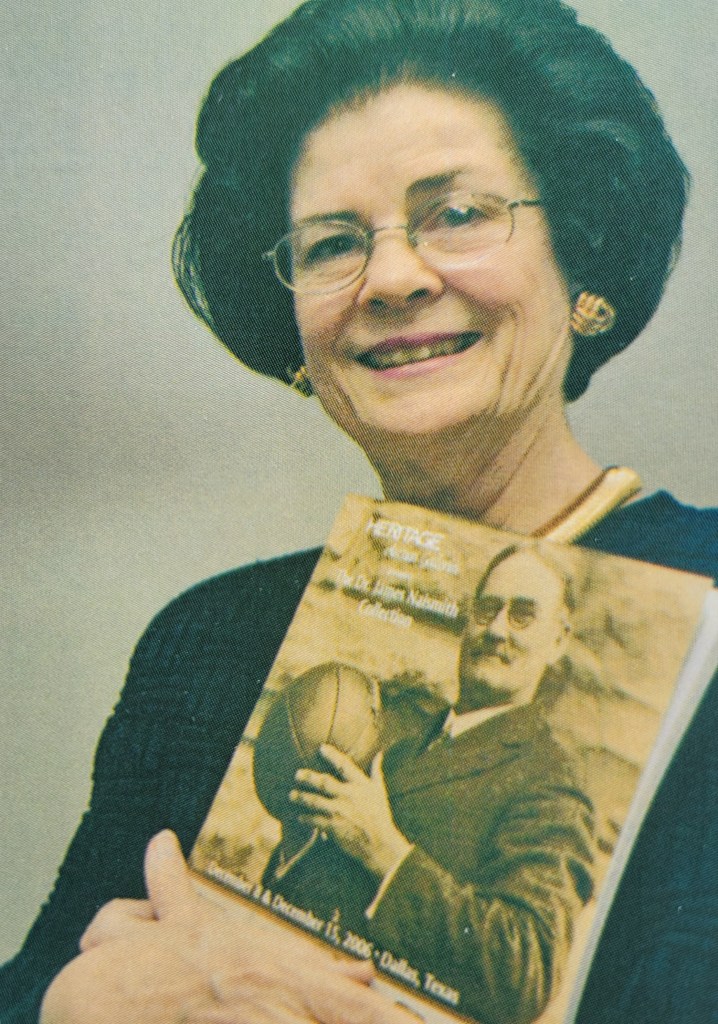 Hellen Carpenter’s mother had told her that most of the things in the boxes were just family things and that knowing they had belonged to her father who invented basketball, she had tried to give it to the Smithsonian. They only told her they would keep them in their storage and not display them, so she told her daughter that if they were going to stay in boxes they might as well stay in her own basement.

Once the Carpenters looked in the boxes and realized what they had, they contacted Bob Lattinville, a St. Louis attorney and sports agent who was amazed at what he saw. He worked with Mike Barnes who cataloged it for the sale.

“A lot of his memorabilia was sold at auction through Heritage House,” said Rains, who worked closely with Hellen and Will on the book, spending many hours both with them and at the Kansas University Library Archives researching his life. “She kept copies of all the letters, including ones he had written home when he was in World War I, a chaplain in the U.S. Army and we were able to use all that in the book.”

The book, written by Rains with her input was “James Naismith: The Man Who Invented Basketball” which came out in 2009, published by Temple University Press with the Foreword by basketball legend Roy Williams. Shortly after the book came out Hellen Carpenter was asked to come to Kansas University for a personal appearance.

They used Hellen’s personal family memories, letters, documents, and the Naismith Archives  in Lawrence, Kansas, to chronicle how Naismith developed the original thirteen rules of basketball, coached the game at the University of Kansas. He established college basketball in the process and was honored for his work three years before Hellen Carpenter was born–in the 1936 Olympics. 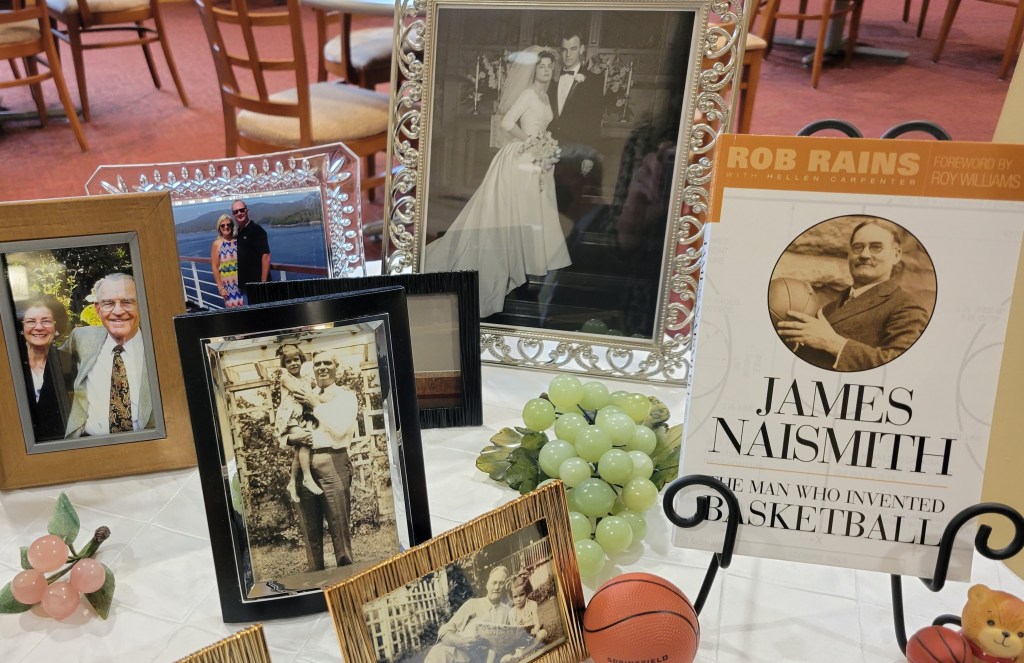 The book was so special to Hellen that on the day of her funeral, her family set it out on a book stand, shown left, on the table with all the special pictures of her

What caused James Naismith to invent basketball? While working for the YMCA, Naismith had been faced with the need to come up with an indoor activity to occupy students. The key to his game was that the players could not run with the ball and that throwing and jumping were eliminate the roughness of force. Later Naismith was said to have thought other sports provided better exercise, but he was pleased to create a game that “anyone could play.”

Naismith’s name is all over the University of Kansas  in Lawrence, with a dormitory – Naismith Hall being named for him; and in the famous Allen Fieldhouse, the basketball court is named for him. While in Lawrence talking about the book, Hellen Carpenter was so pleased to see how eager people were to meet her and find out about her connection to the great James Naismith.

She had seven grandchildren and two great grandchildren. Often when an older person dies the family inherits things they wish they would have asked about. Her son Will said she loved to collect things and had many trinkets and collectors items around the house. Before she lost her memory to Alzheimer’s Disease she spent time with her family going over all the items in the house telling what they were, where she got them, and what they meant to her.

Hellen Carpenter was known for her charity in the area of scholarships started with her husband but she was also known for hosting great parties.

“They held many dinners and gatherings in their home over the years,” said their daughter in a piece handed out at the funeral. “Hellen was an elegant and gracious hostess often entertaining prominent and influential guests. Her kindness and generosity was not limited to her family, but included her loyalty and devotion to her friends and an enthusiasm in her community.”

Rains was one of the fortunate to have been on the receiving end of her hospitality.

“I was lucky to get to meet her as well as Will and their family,” said Rains. “She was a piece of history and also just a great human being and will be missed.”

(Photos courtesy of the Carpenter Family)

Hellen Carpenter had the distinction of being the granddaughter of the man who invented the game of basketball, Dr. James Naismith.

Services: A memorial service will be held for Hellen Carpenter at Bonhomme Presbyterian Church, 14820 Conway Road, Chesterfield, MO, (636)-532-3486, on Tuesday, April 27, 2021. Visitation will be at 1:00 p.m. in the Church Commons Area, to be followed by the Service at 2:00 p.m. in the Sanctuary. Masks will be required. In lieu of flowers, the family requests that contributions be made to the Alzheimer’s Association or the organization or church of the donor’s choice.