Are you in the market for handcrafted items about two of the most popular Cardinals players? This week an Adam Wainwright bobblehead as well as a Yadier Molina word art picture were announced to the public.

Word Artist Dan Duffy introduced his latest work, a tribute to the 10th anniversary of the Cardinals 2011 World Series win with Cardinals catcher Yadier Molina. He is shown with the Yadier Molina picture.

His word art illustration of the final out from the World Series is meticulously handwritten with the date, score and opponent of all 180 games from that season. Duffy spent roughly 100 hours on all facets of the piece including research, sketching, writing, and coloring. An avid sports fan, he created the fine art print as a unique gift to connect Cardinals fans. Younger and older fans alike can spend hours finding their favorite games and recounting their best memories of the Cardinals unforgettable 2011 championship season. 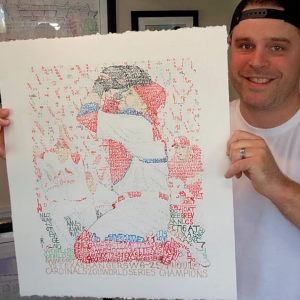 Yadier Mollina is the 90th word art piece he has done.

“I  did my first piece to impress my girlfriend at the time,” said Duffy. “She was a huge Phillies fan and they had just won the World Series in 2008. I hand wrote the scores of every game that season to create the iconic image of Brad Lidge. She liked it, so I just kept on going–and we ended up getting married.”

Duffy went to Hussian School of Art in Philadelphia.

“Not only is he an elite catcher,” said Duffy, “Yadier Molina has become the face of the Cardinals organization. I actually ordered the DVD to watch the final out over and over to find the best moments and Yadi’s reaction said it all. To all of the fans out there, I hope you enjoy spending time finding your favorite games and reliving that epic season!”

To watch Duffy working on his art, CLICK HERE.

Art of Words donates a portion of proceeds from all artwork sales directly to charity. This print, along with 30+ others, will benefit the ALS Association.

“We had always worked closely with the Phillies ALS Phestival by donating prints for their various events,” he said. “Through them, we’d gotten to speak with many different families who had relatives or loved ones with ALS. Over time, we learned just how rough the disease is – and it kind of inspired us to make a bigger push to take action and help out.”

For more info on the Yadier Molina illustration, Art of Words and the charities they support, visit www.artofwords.com.

The action pose figure looks ready to strike out the next hitter. The Cardinals logo is on display on front of base.This bobble head is hand crafted and hand painted.