Sports author Curt Smith has done it again.  He masterfully penned the very popular “Voices of the Game” in 1992 and now he has published another interesting book about the great broadcasters  “Memories from the Microphone: A Century of Baseball Broadcasting.”

In this second in a series of Baseball Hall of Fame books, Smith celebrates the larger-than-life role played by radio and TV announcers in enhancing the pleasure of the national pastime.

The first baseball game ever broadcast on radio was on August 5, 1921 by Harold Arlin, a part-time announcer on Pittsburgh’s KDKA, America’s first commercially licensed radio station. The Pirates defeated the Phillies 8-5. This book commemorates the 100th  anniversary of the first baseball broadcast. 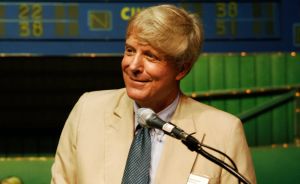 Curt Smith has been called “the voice of authority on baseball broadcasting” by USA Today. “Memories From the Microphone” is an insider’s view of baseball. Smith has known most of the broadcasters he has written about and Red Barber wrote the Foreword.

Readers of this new book will experience baseball from Smith’s perspective and he has spent much of his life covering baseball radio and TV.

He brings the history alive through the eyes of famed broadcasters. The book is organized chronologically and charts the history of baseball broadcasting.

It is filled with stories from such big names as  Mel Allen, Harry Caray, Vin Scully,  Joe Morgan, Ernie Harwell and Red Barber.