There likely will come a day, many years into the future, when Harrison Bader will be sitting in a rocking chair surrounded by grandkids who never had the chance to watch him play for the Cardinals.

The story will be hard to believe for someone who didn’t see it happen. Even for those who have watched it unfold, day after day for the last two weeks, it’s still hard to believe.

On Sept. 10, a loss to the Reds left the Cardinals two games above .500 for the season and 3 ½ games behind the Padres in the race for the second wild-card spot. It was a similar position to where they had been for much of the season, trying to fight through injuries to remain above .500.

While a playoff spot was a possibility, it seemed like a long shot.

Twenty-four hours later, all that began to change. The Cardinals rallied from a 4-0 deficit to beat the Reds on Sept. 11 – and haven’t lost since.

They will carry a 16-game winning streak into Tuesday night’s game against the Brewers at Busch Stadium, the longest streak in the Cardinals’ 130-year history and the longest by any team in the National League since the New York Giants also won 16 in a row in 1951.

It’s also the longest streak after Sept. 1 by any team in the majors since the Cubs won 21 consecutive games in 1935. Only twice in the last 86 years – since what was the franchise record of 14 consecutive wins was set in 1935 – had a Cardinals team won more than 11 games in a row.

The streak, in addition to being historic, also has put the Cardinals just one win away from clinching that spot in the wild-card playoff game next week, either in Los Angeles or San Francisco.

While there seemingly has been a different hero, and a different storyline, with every win, Bader has been front and center stage on many of the days and nights.

Bader’s accomplishments were recognized on Monday when he was named the National League’s Player of the Week for the first time in his career.

Bader believes part of his success, as well as for his teammates, is that they have not focused their attention on the streak or on their individual numbers.

“To be totally honest, my perspective is, ‘What time is the game tomorrow?” Bader said. “It’s great, don’t get me wrong. It’s part of history.  … It definitely feels good, but we have bigger things that we are focused on. We have more games to win, and we’re going to take this energy as deep as we can.

As a group, the Cardinals seemingly have bought into one of manager Mike Shildt’s favorite lines, which he has used multiple times, about there being a reason the windshield on a car is much larger than the rear-view mirror. His mindset has always been that in anything, it’s better to focus on what is in front of you instead of behind you.

There will be a time to put this streak, however long it lasts, into historical perspective – and find a way to explain how a team that won only 16 games once in five months before September reeled off such a streak, a team that took 41 games between May 30 and July 18 to win 16 times.

“It’s a very talented roster, we’ve known that for a while,” Bader said. “To see it come to fruition is awesome, but it’s all about tomorrow, and we’ll be ready for it.”

That’s part of a month that has seen both post big numbers. O’Neill has hit .310 in the month with 11 homers – the most by a Cardinal in September since Mark McGwire hit 14 in 1999 – with 27 RBIs. Goldschmidt has a .341 average for the month with nine homers and 19 RBIs. O’Neill was the NL Player of the Week last week, making this the first time a Cardinals player has won the award in consecutive weeks since Brian Jordan and Ray Lankford were honored in 1996.

Led by Bader, O’Neill and Goldschmidt, the Cardinals combined have hit 46 homers this month, including 13 in the four games at Wrigley Field.

While they have won games that way, they also have won with defensive plays, with speed and with luck, taking advantage of any small mistakes made by an opponent. They also have received contributions from virtually every player on the roster and on the pitching staff.

“Allowing the game to come to you, as difficult as that might be at times, has allowed us offensively to have a lot of success and open our game up,” Bader said. “We’ve hit some homers in big situations simply because of that.

“A lot of it is about creating your own luck as a result of the preparation you do before every game and every series. We’ve prepared really well and stayed confident really well. What we study has come out on the field. If you visualize things prior to them happening, a lot of times they do happen.”

That includes being able to come back when they are losing, as they did both on Saturday and Sunday against the Cubs. Bader had the first four-hit game of his career on Saturday, including getting a key hit in the three-run seventh that gave them the lead. In the eighth, he doubled, stole second and scored on a wild pitch, thanks to a tricky slide.

On Sunday, Bader’s homer in the eighth inning tied the game before the Cardinals won it with two runs in the ninth.

The game on Tuesday night begins the stretch of the last six games of the regular season, when much of the Cardinals focus will shift to getting ready for the one game wild-card game, when the season will either end or be extended.

Then it truly will be the one-game-at-a-time part of the season. 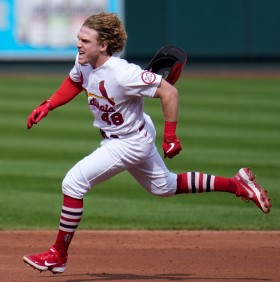 “I think keeping that fresh mentality of every day is a brand new day, let’s just win today, is what has allowed us to put some really good games together,” Bader said.

The fresh canvas, and seeing what that day’s picture will look like when it is over, is fun for Bader – and no doubt will one day be part of the story he will tell about this month. He likely will mention what it felt like to high-five his mom and dad after hitting a home run in New York early in the streak, or making amazing catches in center field.

Of course the end of Bader’s story is yet to be written.

“Every time I get a chance to put on a big-league uniform for the St. Louis Cardinals is a really good day for me,” Bader said. “I like to think that every at-bat, regardless of the previous one, is a new opportunity to do something special.

“Every day you have an opportunity to go out there and choose how you want the day to go. There are certain circumstances that are out of your control but at the end of the day a lot of success boils down to your preparation, your level of confidence, how much you want it, how much you care.

“Sometimes it’s not going to work out. But if you string days like that together and you stay on the aggressive side, you make today be an aggressive day, you’re going to find yourself having more successful days than not.”