As Rob Rains just said on Donnybrook Thursday night when he was a guest with Alvin Reid and Wendy Wiese, “We know sports fans have a lot of interests so we try to bring them as much information as possible– not all about sports.” Since the launch of the site, Suzanne Corbett has been the Travel/Food Editor and she has just co-authored a book called A Culinary History of Missouri which we think readers are really going to like.

“I’ve always loved history, especially food food,” said Corbett. “Collectively, it has been my passion all my life, which has allowed me to be a foodways interpreter with the National Parks and other historic sites throughout MIssouri and beyond. This book allowed me the opportunity to share a few of those stories and present a taste of MIssouri’s food history. A collaborated project shared with my former AAA Traveler Magazine editor, Deborah Reinhardt.”

Whether buying it for the pure history as a souvenir keepsake or gift– or buying it for the recipes, there is something in it for everyone. With the way things are going and the warnings we are getting about holiday gift giving and slow distribution, it’s a good idea to start stockpiling those holiday gifts and this one is a good one to get. 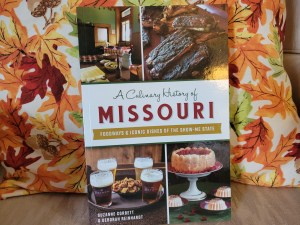 The book, which is 160 pages and paperback with a nice cover- shown left was published by Arcadia Publishing. As the blurb on Amazon.com says, “Missouri’s history is best told through food, from its Native American and later French colonial roots to the country’s first viticultural areas.”

For more than thirty years, Reinhardt was managing editor of AAA Midwest Traveler and AAA Southern Traveler and is the author of Delectable Destinations: A Chocolate Lover’s Guide to Missouri.

In A Culinary History of Missouri, readers will learn about the state’s vibrant barbecue culture, which stems from African American cooks, including Henry Perry, Kansas City’s barbecue king. They will trace the evolution of iconic dishes such as Kansas City burnt ends, St. Louis gooey butter cake and Springfield cashew chicken. Readers will discover how hardscrabble Ozark farmers launched a tomato canning industry and how a financially strapped widow, Irma Rombauer, would forever change how cookbooks were written.

As a long-time food historian and culinary writer Corbett along with Reinhardt,  also a food and travel writer worked on the book for the past year. The book also includes more than 80 historical recipes to capture a taste of Missouri’s history that spans more than two hundred years. There are many recipes for things readers will want to make today, as well as old-time recipes like Pawpaw Pudding. There’s a recipe for Gooey Butter Cake, Seven-Up Bunt Cake, and Kansas City-style Brisket Burnt Ends and others.

We also liked seeing Arthur Bryant’s, the great Kansas City barbecue restaurant mentioned along with Crown Candy and other restaurants in the state of Missouri.

Suzanne Corbett is an award-winning writer– who has won many of those awards with articles from STLSportsPage. She also writes for other periodicals. 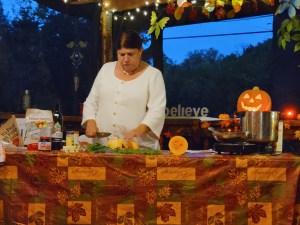 She is a culinary teacher and food historian. For years she served as  cooking instructor at Dierberg’s Cooking School, but shortly after the pandemic started they ended their cooking schools. For the past two years Corbett has been leading classes through the Choose Happy initiative and every class is filled to capacity. The photo, left shows Corbett teaching a COVID-safe outdoor class Thursday night.

Combining her talents of cooking and writing is nothing new as she is the author The Gilded Table – Recipes and Table Traditions from the Campbell House and Pushcarts & Stalls: The Soulard Market History Cookbook. She’s a Telly award winner producer/writer of the documentary short Vintage Missouri: 200 Years of Missouri Wine.

STLSportsPage is lucky that Corbett takes the time to provide articles for sports fans such as how to put on a great sports celebration spread– which Cardinals fans are hoping they will be doing soon.

Since 1999, Corbett also has served as a living history foodways interpreter and research food historian with the National Parks at the Jefferson National Expansion Memorial. She has a Master’s degree media communications from Webster University and is a Certified Culinary Professional with the International Association of Culinary Professionals and a member of Les Dame D’Escoffer.

Several Ways to Order the Book:

The book can be ordered from The Campbell House gift shop with some of the proceeds supporting Campbell House.  As of now it is just available at the gift shop but will soon be listed on their website shop: CLICK HERE

Or directly with the publisher AcadiaPublishing.com

By Suzanne Corbett, STLSportsPage.com Food/Travel Editor The final week of the Tokyo Olympics and all is focused on how much gold Team USA will bring home.  I’m also wondering how much I will be able […]