October is bringing plenty of thrills to Cardinal Nation—but unfortunately the Cardinals ended this exciting season with a thud on Wednesday night. Don’t worry there is lots to do in St. Louis if you like going to live events– the Moolah Shrine Circus and Circus Flora are opening their perspective engagements. Each promising to provide the best thrills outside the ballpark. 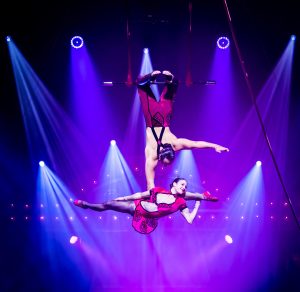 Known for decades as the Circus with Purpose, the Moolah Shrine Circus returns to the St. Charles Family Arena with a three ring spectacular October 7 though October 10.  Classic Big Top acts include aerialists to tigers, each curated exclusivity to create the 78th edition of the Moolah Shrine Circus.  This year’s featured performer is Ringing Brothers Barnum & Bailey  Circus veteran Bello Nock, a seventh generation circus performer, who is an American daredevil clown whose act combines wire walking, swaypole, wheel and trampoline.

Circus Flora, one of just two European-style one-ring circuses in the nation,  blends the focused energy of modern performance with the lyrical storytelling of traditional circus arts. This year’s story theme is The Trail of the Century, turning the Big Top into a courtroom while the acrobats become the evidence, and the audience members themselves become the jury. 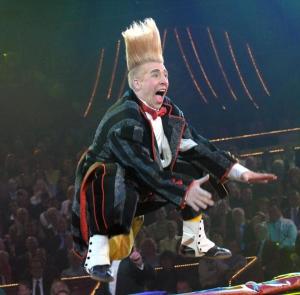 Among this year’s featured performers are Circus Harmony’s St. Louis Arches and Yo-Yo the Clown, aka Cecil MacKinnon. This season also welcomes new faces to the ring, including comedic contortionist Jonathan Burns (whom some may recognize from America’s Got Talent or The Late Late Show with James Corden), the Savitsky Cats and the stunning trapeze act Duo Rose.

As Artistic Director Jack Marsh, who creates the show each season with Cecil MacKinnon said, “We make the performance a different experience every year, so whether this is your first Circus Flora show or your thirty-fifth, you’ll see something new.”

To run away to the circus and catch a show before the tent folds and the clowns go home,  follow these links to get your tickets. Moolah Shrine Circus: www.Moolah.org/circus and Circus Flora: www.circusflora.org