GLENDALE, Ariz. – Cardinals’ prospect Brendan Donovan has a very simple opinion about his experience playing in the Arizona Fall League.

“If you don’t get better here, then you just didn’t put the time in,” Donovan said.

The decision to spend two months playing in Arizona following the end of the regular season was an easy one for Donovan, who like all minor leaguers, is still trying to make up for the lost 2020 season.

Donovan took some major strides toward doing that this year, when he moved up three levels in the organization, beginning the year at Peoria, spending much of the summer at Springfield and finishing the year at Memphis.

Actually Donovan’s season ended in Los Angeles, where he watched the Cardinals’ wild-card loss to the Dodgers from the dugout as a member of the taxi squad for the game.

“About the seventh inning I kind of looked around,” he said. “There were like 55,000 people there and I was like, ‘holy crap.’ It was loud and electric, it was incredible.”

Even though he wasn’t eligible to play in the game, Donovan called that night, “the best baseball experience I’ve ever had to this point.”

“It gave me a taste, motivation going into the offseason,” he said.

Donovan provided most of his own motivation with his success on the field in 2021, when he developed a knack for being able to move all over the diamond. Between the three levels, he started games at all four infield spots plus in left field, right field and as a designated hitter.

“I keep trying to let me play center,” he said.

The left-handed hitter, primarily either a second or third baseman in his career before this season, enjoyed that experience and believes the added versatility will help his chances as he begins to compete for a spot on the major-league roster.

“They (the Cardinals) suggested I start moving around and get reps everywhere,” Donovan said. “I kind of look at it as if someone needs a day off, I will play in that spot. It keeps you in the lineup everyday; that’s kind of the role I took.

“You really have to take a lot of pride in your defense and that’s something I’ve learned to love, the reps and the work that goes into it.” 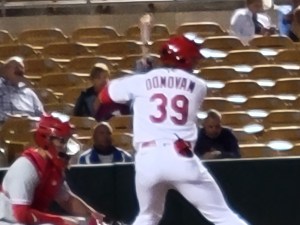 It hasn’t hurt Donovan’s rising prospect status that he also enjoyed a good season offensively. Combined between the three levels in the regular season, he posted a .304 average with 12 homers, 66 RBIs and 19 stolen bases in 108 games.

He has played in seven games so far for the Glendale Desert Dogs in the Fall league, going 10-of-28, a .357 average, including five doubles.

The 24-year-old Donovan, a seventh-round pick by the Cardinals in the 2018 draft out of South Alabama, credits his offensive success to his work with all of the hitting coaches in the organization.

“I went to an instructional camp in 2020 and we just dove in,” he said. “I realized I wasn’t in the zone long enough, and it made me miss a lot of pitches. I was a little inconsistent. It (the changes) put me in a better position and allowed the barrel to work through the zone a lot longer.”

Donovan was glad to get a chance to see if those changes worked in live games after being limited to batting practice and working out during 2020. He did take advantage of the extra time by putting in a personal gym at his home in Alabama. 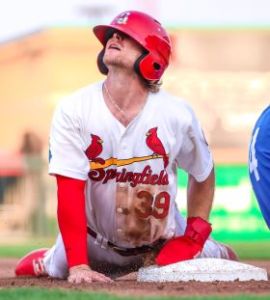 “I was just ready to play,” Donovan said. “I know I needed reps. I thought it would be a good year. I got to find a swing that works, and something I could be consistent with.

“I’ve learned a lot this year, definitely more than I thought I could. I’ve been around a lot of great players and I’ve tried to take something from each and every one of them.

“Being here, and being around players from different organizations, I’ve tried to pick their brains. This is for development. That’s what it’s all about. It’s been a great experience.”

Some other news and notes on Cardinals prospects from the Fall League:

* Top prospect Nolan Gorman has not played since Oct. 21, when he suffered a leg injury. The injury came in only his sixth game of the fall, and it isn’t known how much longer he will be out.

* Left-hander Zack Thompson has pitched in relief all fall, allowing only two runs over a combined 12 innings in six appearances. Both of those runs came in the same outing on Oct. 29. Thompson, the Cardinals’ first-round pick in the 2019 draft, worked three scoreless innings on Monday. He has 13 strikeouts in his 12 innings, but also has walked 10.

* Andre Pallante moved into the starting rotation for Glendale to take the place vacated by Jordan Hicks when he left the team after two starts and returned home. Pallante will make his second start on Wednesday.

* Left-handed pitcher Garrett Williams has been added to the Glendale roster to replace Hicks.

Photos of Brendan Donovan courtesy of the Springfield Cardinals