MLB players take to their website, ThePlayersTribune.com if they want to get a message out and Matt Carpenter posted a message to Cardinals fans on November 8, 2021.

The messages read in part: “My time wearing that iconic uniform is over. Goodbyes can be really hard. And I really felt like I owed each and every member of Cardinal Nation something…” 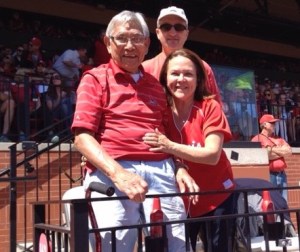 Fans have been reacting to Carpenter’s letter and one fan wrote to us with a letter for Matt. Lisa Meyers of St. Louis reached out to us with her feelings on Carpenter’s future as a non-Cardinals. She is show in the photo, left with her husband Larry Meyers and her dad, Lou Lopez who she says is a life-long Cardinals fan like she is.

“I just read his farewell letter/email,” she said. “I want to express my appreciation for him, his effort and contribution to the Team.  I read many critical comments about him but no one can argue about his character and determination even when he lost his playing time.  He didn’t sulk or whine and it surely could not have been easy on him.  He is a true Cardinal and man of character wherever he should land and i wish i could tell him that in person.”

So she penned. her own note to Carpenter:

I read your heartfelt farewell.  It’s so you to be grateful to have worn the Birds on the Bat. As a lifelong Cardinals fan, I appreciate your sincerity and thank you for always coming prepared to play and giving 200%.  Thank you for all of your contributions to many Cardinals’ wins and to the St Louis community. Thank you for your perseverance when times got tough – the true measure of a competitor, they stay tough.All the best to you.

We appreciate all the great feedback we get from our fans, and love doing fan spotlights.