Bill Virdon, the West Plains, Missouri standout whose 52-year run in professional baseball featured the National League Rookie of the Year Award, a World Series championship and a successful managerial and coaching career, passed away on Tuesday in Springfield. He was 90.

“The Missouri Sports Hall of Fame joins with The Virdon Family in mourning Bill’s passing. Bill and his wife, Shirley, have been great friends, and he was just a great man,” said Jerald Andrews, CEO and Executive Director of the Missouri Sports Hall of Fame. “In my 26 years here, I think he played a more significant role than any other Missouri sports personality. He was just involved in anything and everything we did.”

The Missouri Sports Hall of Fame inducted Virdon in 1983 and named him a Missouri Sports Legend in 2012, when it unveiled his bronze bust that has since been on display on the Legends Walkway.

The Virdons have been working with David Jerome on a book and in fact, just the day before his death, the cover art arrived in the mail to Jerome’s house. He proudly displayed it on Facebook. 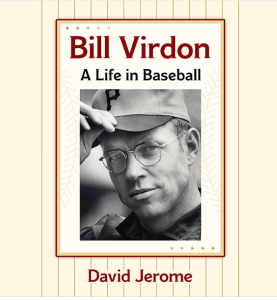 Jerome has spent a lot of time in recent years with Virdon, working on the book. Besides working on the book he and his wife, Kathy have become friends with the Virdons and recently went to dinner to celebrate Bill and Shirley Virdon’s Anniversary.

“Writing Bill Virdon’s biography is one of the greatest joys of my life,”  Jerome told STLSportsPage.com Tuesday night. “I  had the privilege to get to know a remarkable man and his wife, Shirley, over the past two years. The storytelling that they provided, along with others, truly makes this a unique book.

McFarland & Company is publishing the book and the author is hoping for a late spring 2022 release.  Jerome has spent 23 months on the book and it includes hundreds of hours of interviews with Bill and Shirley Virdon. 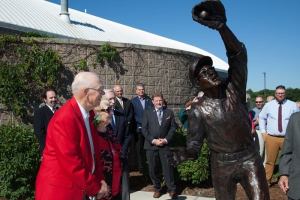 “It is my hope that baseball professionals, past and present, as well as fans, sports writers and broadcasters will find this biography informative and enjoyable about the life of a remarkable man,” said David Jerome.

Virdon is remembered throughout the Missouri Sports Hall of Fame. A large display of Virdon’s time with the Pirates and Houston Astros went on display at the Missouri Sports Hall of Fame in Springfield,  in the early 2000s and, in May 2017, a larger-than-life bronze statue of Virdon (shown left) – commemorating his outstanding catch in Game 1 of the 1960 World Series for the Pittsburgh Pirates – was celebrated before a large crowd in Springfield. 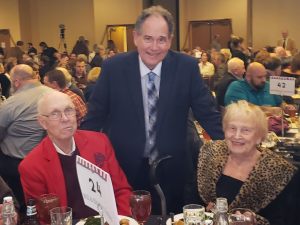 Bill Virdon recently received a star on the Missouri Walk of Fame  at the Missouri Cherry Blossom Festival in Marshfield, Mo. Rob Rains introduced him at the ceremony.

Mark and Dixie Dawson, who own the Blackberry Creek Bed and Breakfast near Marshfield knew him and his family, where they met and hosted Shirley’s 80th Birthday weekend. This initial stay led to their family gathering for a Christmas dinner and party up until COVID last year.

“Bill Virdon was inducted in the Cherry Blossom Festival; we suggested him to the committee” said Mark Dawson. “Their family annually visits for the ‘Virdon Family Christmas’ in December, after discovering us for Shirley’s 80th Birthday weekend.”

The Walk of Fame induction ceremony is held each April during the Cherry Blossom Festival and all inductees must have either been born in or lived in the state of Missouri or have contributed significantly to the greater good of the Show-Me State. 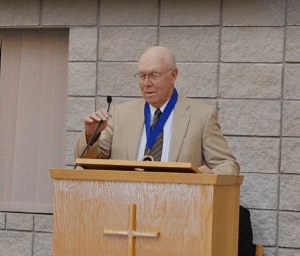 The Rev. Nicholas Inman, who founded the Mo. Cherry Blossom Festival was instrumental in getting his star after the Dawsons suggested him. Virdon is shown, right, making a speech at the Missouri Walk of Fame event.

“Bill Virdon was a real Missouri legend,” said Rev. Inman. “We always enjoyed his attendance at the Missouri Cherry Blossom Festival and we were so sorry to learn of his passing. He was one of the few baseball players to be honored on the Missouri Walk of Fame at the festival. He was truly a great guy and a cherished friend.”

Over the years, Virdon supported numerous community efforts and many Missouri Sports Hall of Fame events, including its Celebrity Golf Classics, the Stan Musial Hall of Fame Championship and all of its sports enthusiast luncheons. In fact, he and Shirley attended the Hall of Fame’s Football Luncheon on Oct. 13 in Springfield.

Originally signed by Yankees scout Tom Greenwade (MSHOF 2013), Virdon made his pro debut in 1950. He then played 12 seasons in the big leagues between 1955 and 1968. He won the 1955 National League Rookie of the Year award with the St. Louis Cardinals before a 1956 trade sent him to Pittsburgh.

He then helped the Pirates win the 1960 World Series in a seven-game upset of the Yankees. 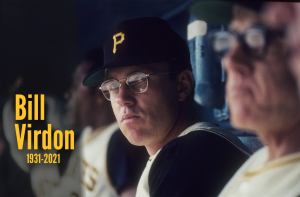 He is credited with winning the series opener, as Virdon in the fourth inning robbed Yogi Berra of a two-run double at the 407-foot marker of cavernous Forbes Field – and he hung on despite colliding with right fielder Roberto Clemente. It was a 3-2 Pirates lead at the time of an eventual 6-4 win.

In the seventh inning of Game 4, Bob Cerv’s chance for a two-run double disappeared into the center fielder’s glove in one of the most acrobatic catches in World Series history. Virdon preserved the Pirates’ 3-2 advantage, which proved to be the final score.

When asked about the catches in 2017, Virdon downplayed both, saying with a smile, “I guess I did that.”

He also was an assistant on the Pirates staff from 1968 to 1971, with the 1971 Pirates winning the World Series. In 1974, he was The Sporting News Manager of the Year after leading the Yankees to a runner-up finish in the American League East Division.

Virdon remained in the game as a coach in the big leagues and the minor leagues through 2002 mostly for the Pirates, including on their 1992 club that reached Game 7 of the NL Championship Series.

“I enjoyed bringing my uncle and Bill together one day to enjoy lunch and hear their (baseball) stories,” said Mark Dawson.  “My uncle Ray Haley, who passed this year at 92, played in the KOM League (in the minors) for the Yankees as a catcher when Yogi Berra was the multi-World Series catcher for the Yankees. ‘Uncle Bud’ knew and played with Jerry Lumpe who attended Shirley’s birthday party at our bed and breakfast, along with Tal Smith from the Astros. It was neat having all them at our place to celebrate Shirley.”

Speaking of celebrations, Bill and Shirley celebrated their 70th wedding anniversary on Sunday in Springfield, where they had made their home for years.

“He waited long enough to celebrate his 70th Wedding Anniversary with Shirley,” said David Jerome.  “I got to visit with him yesterday for three hours.”

On that visit, Jerome showed him parts of the book for one last approval.

” Reading of the preface of the book the following day, (after the anniversary party) Bill seemed to be at peace,” he said.

Shirley and Bill Virdon were very active and had many friends. They were season-ticket holders of the Double-A Springfield Cardinals since the club’s inception in 2005, and on any given night could be found in the stands watching the games. 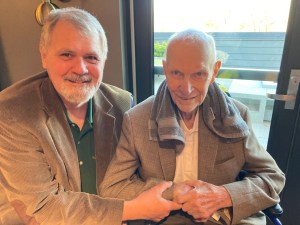 “I found Bill to be quite humble for a man that accomplished so much,” said Jerome, shown in the recent photo, left. “He never tooted his own horn. I just hope (the book) sheds a little light on a remarkable legacy that has gone largely unnoticed.”

“Rest In Peace, Bill Virdon. You were loved by so many and you will be missed by all who knew you so well. I know that God has his arms wrapped around you welcoming you home!” 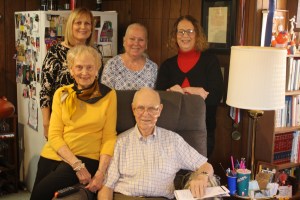 The photo, right, of the Virdon family was taken by David Jerome in April 2021.

Photo credits: Some photos courtesy of the Missouri Cherry Blossom Festival, personal photos from David Jerome and the photo of Bill Virdon making the speech, courtesy of Mark Dawson.