Update Feb. 6, 2022: Jim Edmonds is scheduled to appear with Wainwright. The event is sold out.

Second Update: Friday Jan. 28: As per Big League Impact: “Due to the rules surrounding the current MLB lockout, Jason Isringhausen is unable to attend the Feb. 6 event. We apologize for the inconvenience.”

First Update: At the time of the writing of the original story Dallas Davidson was the only act but since then Dylan Marlowe and Rachel Wammack have been added and former Cardinals pitcher Jason Isringhausen will be there.

Those who are missing the opportunity to see players at this time of year like they would have at the Winter Warm-Up will be happy to know they can see Adam Wainwright and singer/songwriter Dallas Davidson at Boondocks in Springfield, Illinois on Sunday, February 6, 2022. It will be a live music event featuring  Davidson along with a two-hour autograph session with Wainwright. 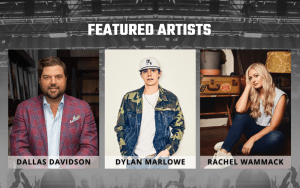 This week there were some additions to the lineup: Dylan Marlowe and Rachel Wammack.

“After the unfortunate cancellation of the annual Winter Warm-Up event earlier this month, I’m just so excited to have the opportunity to have this time to connect with Cardinals fans in the off-season.”

Wainwright always has a charity booth at the Winter Warm-Up and he wanted to do this concert to help the charities he serves with Big League Impact.

“The work that we do with Big League Impact has affected and impacted millions of people in the U.S. and around the globe,” Wainwright says. “We are so excited to bring our Big League Impact community together for this fun event and hopefully raise a lot of money so we can keep up our efforts to help people meet their most basic human needs.”
Doors will open at 1:30 p.m., and the event will kick off with an autograph signing line from 2 to 4 p.m. The event will also include a two-hour autograph window, where each attendee will have a chance to chat with Wainwright while he signs personal items; attendees must supply their own item to be signed. 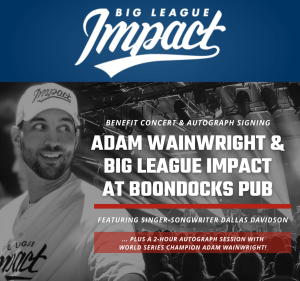 He is also a recipient of three CMA Triple Play Awards,  given to songwriters who write three number-one singles in a one-year span. Davidson is the Chairman of the Georgia Music Foundation.

He wrote Trace Adkins’ “Honky Tonk Badonkadonk” which shot to number 2 on the country charts in early 2006. Davidson co-wrote the Brad Paisley-Keith Urban duet “Start a Band”, which reached number 1 in January 2009; co-wrote Billy Currington’s “That’s How Country Boys Roll”, which went to number 1 in 2010.

Other singles that Davidson co-wrote include “Put a Girl in It” by Brooks & Dunn; “Gimmie That Girl” by Joe Nichols;  “All About Tonight” by Blake Shelton; “All Over Me” by Josh Turner; “Rain Is a Good Thing” by Luke Bryan; Justin Moore’s “If Heaven Wasn’t So Far Away;  Lady Antebellum’s “Just a Kiss” and “We Owned the Night;” Luke Bryan’s “Country Girl (Shake It for Me).”] In 2013, he co-wrote “Runnin’ Outta Moonlight” by Randy Houser, “Granddaddy’s Gun” by Aaron Lewis and “Keep Them Kisses Comin'” by Craig Campbell.

Big League Impact is currently seeking sponsors for the event. Sponsors will be invited to a VIP reception with a chance to take photos with Wainwright and Davidson before the concert. For more information and to purchase a sponsorship, visit www.bigleagueimpact.org/boondocks.
HEALTH & SAFETY PROTOCOLS: Masks must be worn at all times during the autograph session, and during the concert except when actively eating or drinking.
For more information, visit www.bigleagueimpact.org/boondocks.
About Big League Impact: https://www.bigleagueimpact.org
Big League Impact, Inc. is a 501(c)(3) nonprofit organization that partners with professional athletes to help people meet basic human needs like food, clean water, medical care, shelter and education in an effort to save lives, restore dignity and instill hope. Founded in 2013 by St. Louis Cardinals pitcher Adam Wainwright, the organization works with 80 MLB players and has raised more than $6.8 million for athletes’ causes.

To find out more about the concert and to order tickets CLICK HERE.