Since February is Black History Month, several outlets are spotlighting collectible Negro Leagues merchandise including The National Bobble Head Museum (NLBM) is introducing the collectible item shown at the top of the page today (Friday, Feb. 11). This one-of-a-kind collectible features replicas of the statues on the field inside the Negro Leagues Hall of Fame in Kansas City, Missouri 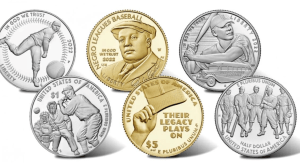 Fanatics has their Negro Leagues wearable gear on sale, and the U.S. Mint has even gotten in on the act with the 2022 Negro Leagues Baseball Commemorative Coin Program they started in January. Some of the coins are shown, left.

All of this commemorates the 100 year anniversary of the establishment of the Negro National League, the professional baseball league formed in response to African American players being banned from baseball’s major leagues. The anniversary was observed in 2020 but continues to be celebrated. 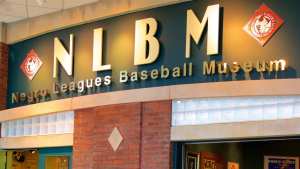 The Negro Leagues Baseball Museum (NLBM) is the world’s only museum dedicated to preserving and celebrating the rich history of African-American baseball and its impact on the social advancement of America. The not-for-profit organization is located in the heart of Kansas City, Missouri’s Historic 18th & Vine Jazz District– just two blocks from the Paseo YMCA where Andrew “Rube” Foster established the Negro National League in 1920.

St. Louis was one of the cities that had a Negro Leagues team–  the St. Louis Stars. The talent on the Stars was so rich that there were five players who are now in the Baseball Hall of Fame as: James “Cool Papa” Bell, Oscar Charleston, Mule Suttles, Biz Mackey, and Willie Welles.

St. Louis baseball fans have long known about James “Cool Papa” Bell. Back in the early 1980’s when Bob Costas was on KMOX Radio, he would often talk about Bell’s great career, and in fact Bell’s nephew would call in to the station to talk about him with Costas. After Bell died in St. Louis in 1991, in his honor, Dickson Street, on which he lived, was renamed James “Cool Papa” Bell Avenue. The legendary baseball player was so important that his death was reported in the New York Times; Washington, Post; and L.A. Times.

Around the time of Bell’s death, the ballplayers were getting older and many did not want the memories of this great league to be forgotten, so  a group of former Negro League baseball players, including Kansas City Monarchs outfielder Alfred Surratt, John “Buck” O’Neil, Larry Lester, Phil S. Dixon and Horace Peterson  met and the eventual result was The Negro Leagues Baseball Museum. Bob Kendrick came on board as president in 2011 and has been working. hard to preserve the memories ever since. 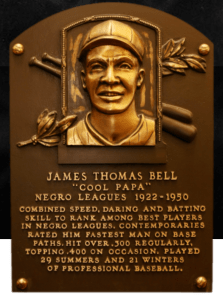 “Cool Papa” Bell is a significant part of those memories and was one of the best players in Negro Leagues history and one of the fastest ever to play the game. He played a large portion of his career for the St. Louis Stars and made St. Louis his home after his playing and coaching career. Bell was elected to the National Baseball Hall of Fame in 1974 and The Sporting News  included him as one of the top 100 players in Baseball history in 1999, Bell was a very good pitcher when he started in the Negro Leagues in 1922.  but just two years later he switched to playing centerfield and became one of the leagues biggest stars at the plate.

There were so many great talents in the Negro Leagues and a trip to the Negro Leagues Museum in Kansas City is a must for all baseball fans– and just fans of history. To commemorate this, on Friday Feb. 11, 2022 the National Bobblehead Hall of Fame and Museum in partnership with the Negro Leagues Baseball Museum (NLBM) and NegroLeaguesHistory.com unveiled the first officially licensed, limited edition Negro Leagues Field of Legends Bobbleheads –which includes St. Louis legend Cool Papa Bell.  The bobbleheads replicate the 13 life-size statues featured at the NLBM on the museum’s Field of Legends. The bobbleheads are available individually or as a puzzle set, which is a full replica of the Field of Legends, including the outfield walls and scoreboard, at the NLBM in Kansas City, MO. The NLBM will be the site of the official unveiling which is taking place today (Friday) at 2:00pm Central Time at the NLBM, at 1616 E. 18th St. in Kansas City, Missouri. 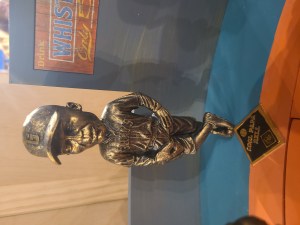 The Field of Legends Puzzle Set is individually numbered to only 200 and is $625 while the individual bobbleheads are $35 each, as shown with the “Cool Papa” Bell bobble shown left,  or $400 for the set of 13. The puzzle set features 13 bobbleheads that fit together at the bases to form a replica of the Negro Leagues Baseball Museum’s Field of Legends. The individual bobbleheads feature each player on a baseball shaped base with their name on a plaque on the top of the base. The bobbleheads were produced by the National Bobblehead Hall of Fame and Museum in conjunction with the NLBM and Negro Leagues History. Sales of the bobbleheads support the NLBM and its mission.

These are the first bobbleheads to replicate the iconic Field of Legends, and this marks the largest bobblehead puzzle set in terms of both size and number of pieces. Proceeds from the sale will add to the total of over $35,000 raised for the NLBM through the sale of bobbleheads since the Centennial Bobblehead Series was introduced in 2020.

An impressive aspect of the NLBM is the Field of Legends. Accessible only at the end of the tour, one can walk onto a field adorned by nearly life-sized bronze statues of 13 figures form Negro Leagues history. Crouching behind the plate is catcher Josh Gibson, one of the most prolific hitters in baseball history. At first base is another Hall of Famer, Buck Leonard, a teammate of Gibson’s with the Homestead Grays. Pop Lloyd is at second base, Judy Johnson monitors shortstop, while Ray Dandridge holds down third base. In the outfield are Cool Papa Bell, Oscar Charleston, and Leon Day. On the mound is Satchel Paige, perhaps the most famous Negro Leaguer of all time. At the plate is Martin Dihigo, the only man to be inducted into the Hall of Fame in four countries – Mexico, Cuba, the Dominican Republic, and the United States.

Other statues commemorate Rube Foster, the founder of the first Negro National League, Buck O’Neil, a former player and manager with the Kansas City Monarchs and a member of the museum board until his death on October 6th, 2006, and umpire Bob Motley. The statue of Motley behind home plate was added in November of 2017 – two months after his death.

“We’re thrilled to be releasing the Negro Leagues Field of Legends Bobbleheads today to celebrate Black History Month,” National Bobblehead Hall of Fame and Museum co-founder and CEO Phil Sklar said. “The Field of Legends is a remarkable feature of the NLBM and now people can have their own full or individual replicas in bobblehead form. The Negro Leagues Bobbleheads are a great way to keep the legacy of the league and its players alive and we think this is the perfect bobblehead series to accomplish that mission.”

“The Field of Legends is the centerpiece of the Negro Leagues Baseball Museum and is one of the most amazing displays in any museum anywhere in the world,” said Bob Kendrick, President of the Negro Leagues Baseball Museum. “We’re thrilled to partner with the National Bobblehead Hall of Fame and Museum and NegroLeaguesHistory.com to give fans an opportunity to have this collectible replica of this amazing display,” Kendrick said.

“The full replica bobblehead of the Field of Legends is our most complex bobblehead to date.  We are fortunate it comes shortly after Buck O’Neil was elected to the Baseball Hall of Fame,” said Jay Caldwell, founder of NegroLeaguesHistory.com.

Fanatics has a line of clothing dedicated to the the Negro Leagues and according to their website, the Kansas City Monarchs are the most popular team with the most gear purchased. To see their offerings CLICK HERE.  fanatics.93n6tx.net/vn1YbN 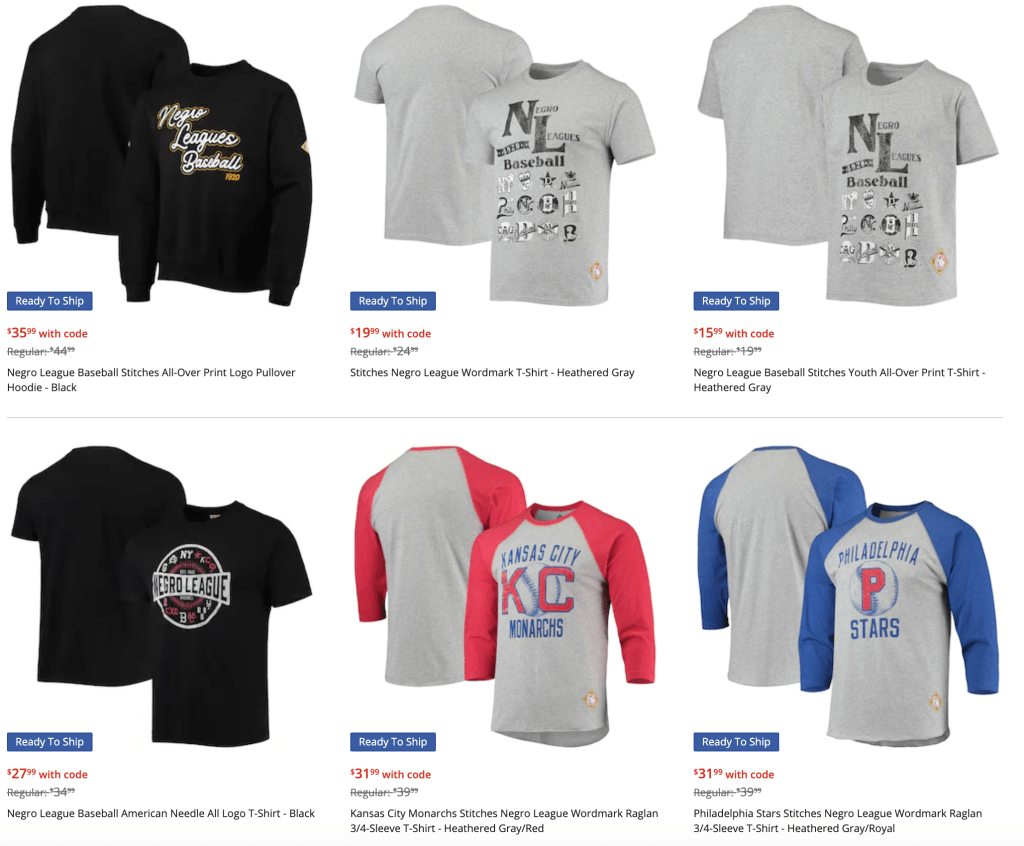 About the Negro Leagues:

The first successful Negro League was founded by Rube Foster on February 13, 1920, at the Paseo YMCA in Kansas City. Foster believed an organized league structured like major league baseball would lead to eventual integration of the sport and racial reconciliation.  Foster did not live to see his dream come true. Others picked up his cause, and in 1947 Jackie Robinson broke Major League Baseball’s color line.

About the Negro Leagues Baseball Museum:

The Negro Leagues Baseball Museum (NLBM) is the world’s only museum dedicated to preserving and celebrating the rich history of African American baseball and its profound impact on the social advancement of America. The NLBM operates one block from the Paseo YMCA where Andrew “Rube” Foster founded the Negro National League in 1920. In 2006, the NLBM was designated as “America’s National Negro Leagues Baseball Museum” by the United States Congress.

Dreams Fulfilled was organized to promote the Negro National League Centennial in 2020. Its founder, Jay Caldwell, was selected by the Negro Leagues Baseball Museum as the primary exhibitor for an art and artifact exhibition at the museum between February 1 and May 31, 2020. Dreams Fulfilled works with the Negro Leagues Baseball Museum to create a traveling exhibit featuring nearly 240 portraits of Nego Leagues players painted by Graig Kreindler. Visit us at www.NegroLeaguesHistory.com or www.facebook.com/NegroLeaguesHistory.