JUPITER, Fla. – For most of the past 10 years, Turner Ward would go to work trying to focus on his job of helping hitters get out of slumps, correcting flaws in their swings and offering a positive voice of encouragement and support.

He did that job, for the Diamondbacks, Dodgers and Reds, at the same time his mind was often someplace else.

When Ward was a Double A manager in the Diamondbacks organization in 2012, he was on the road when he got a phone call from his wife, Donna, telling him she had been diagnosed with breast cancer.

What Donna, who began dating Ward when they were teenagers before they were married in 1988, didn’t know then was that she was starting a journey that would see her go through 14 surgeries in the span of 9 ½ years.

“She will say that she was in tears for a year straight and I didn’t know that until later,” says Ward, who is beginning a new job this year as one of the Cardinals’ hitting coaches. “What she didn’t know is I was in tears.”

Ward still has to try to hold back those tears now when talking about Donna’s health, even with the knowledge that she is free of cancer.

The couple had a scare in January, but a surgical biopsy came back clean. Donna has to undergo a scan every six months, with the next one scheduled for late April, since she is considered a high-risk candidate for a recurrence.

What Ward is able to realize now, as he reflects back on their journey, is the power of faith, the importance of staying positive and how everything that Donna went through – what he knew and what he didn’t know until years later – has helped make him a better coach.

“One hundred percent,” he said. “What it did for me, I always thought I was a compassionate person and it (Donna’s health) took my compassion to another level, even into the game of coaching.

“It kind of enhanced my senses. Every guy is going to struggle and go through a slump. It’s a part of life, struggles and slumps … Part of my philosophy has always been that somebody won’t really care how much you know until they know how much you care. That part is easy for me.”

One Cardinal who knows first-hand about Ward’s philosophy is Paul Goldschmidt. They first met in 2011 when Goldschmidt was playing at Double A Mobile, when Ward was the manager. Less than two years later, they were both in the majors, where Ward had spent a decade as a player.

“He was one of the first guys I ever read the Bible with and I asked him a lot of questions. Turner makes no secret about what he believes, so he was a guy I would turn to to ask questions. We spent so much time together. We talked about a lot of subjects, but also a lot of baseball. He’s a very smart baseball guy.”

Said Ward, “It was a relationship that was built in the fire of the game. Because of that we kind of learned a lot about each other. To me that’s kind of where baseball takes us. There are so many different personalities and places.”

When Goldschmidt knew there would be changes to the Cardinals’ coaching staff after last season, he called new manager Oli Marmol to give Ward his endorsement. Goldschmidt also passed along what he knew and had heard about other coaches the team might be considering. 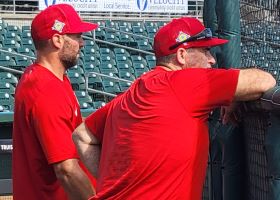 “It wasn’t like, ‘Hey you need to hire this guy,’” Goldschmidt said. “Our job as players is to play, hopefully I was very upfront about that. It’s not our job to sign players or to coach. Our job is to play. Obviously I love him, but I didn’t want to put that personal aspect in there.

“If I spoke highly about Turner it wasn’t about me. I couldn’t be selfish. I just think we have a lot of guys and he can help them all.”

Ward can do that better now because of what Donna did, without him knowing it, to help him the last several years.

“I kept a lot from him, just trying to protect him,” she said. “I didn’t want him to worry. I wanted him to be able to do his job. I said from the beginning I was the one who had cancer. I was the one facing it. I didn’t want my family’s life to change, just mine, so I worked really hard at that … which wasn’t really a good idea. Now that I’m a little bit farther out I can see that now.”

At the time when Donna wasn’t telling Ward everything that was going on in her life, she thought she was helping keep him focused on his job.

“I kind of thought that, and then I realized it was harder on him because he wasn’t with me and he was worried about me,” she said. “I was going to appointments by myself, scans, all of the unknowns we were facing. It was probably a bigger burden on him to be away.

“I knew he would have quit his job to be with me. I didn’t want him to do that.”

So even when Ward was in another city, working, and Donna was at their home in Mobile, Ala., they were together in faith. At times that was all they could rely on.

“It was out of our control,” she said. “There was nothing he (Turner) could do to fix it. There was nothing I could do to change it. Just accepting it, knowing that, and really learning to live one day at a time. It was so overwhelming to look ahead that we tried to focus on living one day at a time and being thankful for what you have instead of what you don’t have.”

The Ward’s have three children, who were 19, 12 and 7 when Donna was diagnosed, adding another layer to everything they were going through.

“Really honestly I don’t know how we could have handled it without the support of our family and friends, and most importantly our faith,” Ward said. “It was tested, it was tested big time. It was tested in a lot of different ways.

“But to me life is just a test. We can fail the test this day, but we can learn from that and kind of grow. There were a lot of tests we passed, tests we failed and grew through and continue to grow.”

In at least one way, the Ward’s can compare those tests to what happens daily on the baseball field.

“With us being in baseball forever, maybe we took the baseball mentality into the cancer,” Donna Ward said. “One day at a time. It can be a bad day today but hey tomorrow’s a new day. You might go 0-of-4 today but tomorrow you can go 3-of-4. We took that mentality into how we dealt with cancer.”

That knowledge of baseball, and what it takes to be successful, was another reason Donna Ward tried to deal with her personal battle quietly.

“Baseball is his passion and his love, and I know that,” Donna Ward said about her husband. “He is so good at what he does. That is one of the reasons I didn’t want him to know that I needed him at home. He might be worried about me or thinking about me, but he is 100 percent going to do his job.” 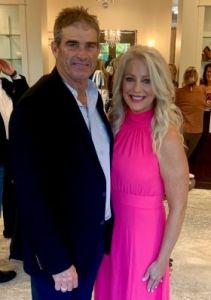 Ward didn’t learn some aspects of Donna’s journey until she started keeping notes, and texting them to him, which she later turned into a book, “Unexpected Hope,” which was published in 2020.

“The stuff she would send me was so profound,” Ward said. “She was learning and growing, and I used to tell her I think this is going to be a book. This is going to help women. She printed her thoughts that you would never want anyone to know, even me a lot of times. To put it out there is very humbling and very encouraging at the same time.”

Ward knows the book can provide a resource that wasn’t available to his wife as she was going through all of her medical treatments.

Until he saw what his wife was going through, Ward thought he had experienced the worst pain of his life when he broke and dislocated his ankle on the final day of spring training in 1989.

“My foot and ankle were turned almost at a 90 degree angle,” he said. “I had shattered bones, everything. I was in the worst physical pain of my life.

“When I watched my wife go through her pain, it was like the emotional pain and physical pain were meeting at the same place. One is no different than the other. Pain is pain, suffering is suffering.”

The Ward’s both know that going through the pain and suffering offers lessons that can be applied to life’s other problems and that the Cardinals’ hitters can be the beneficiary of that this season.

“He’s a guy with a big personality,” Marmol said. “He’s got a passion for the game. He loves teaching. He loves players, he loves relationships and that’s a big part of his position, being able to carry out the visions of what we want from the hitting standpoint.”

After spending the last two years out of professional baseball, Ward hopes that in his new role he will able to combine his personal philosophies about hitting with the added knowledge  that comes from analytics to find what works best for each Cardinals’ hitter.

“Baseball has always been real visual,” he said. “I want to make it simple. This game is very complicated and hitting is very hard … try to keep it simple in a world where there’s a lot of numbers and data.

“Everybody here is trying to improve. There’s not one guy here who thinks they are ‘there’. It’s a constant learning and growing process and to me, that’s where I love to fit in. I’m still willing to learn.” 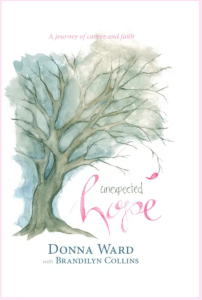 Knowing that even sub-consciously her husband won’t be worrying about her while he’s working, Donna Ward, like the Cardinals, are looking forward to a successful 2022 season.

“He will be better mentally, knowing that everything is good with me,” she said. “It will be better for him because he can enjoy it. He’s not going to be mixed or torn, wanting to be home with me and also wanting to do his job. That’s his heart and his passion.”

To find out more about Donna Ward’s book, CLICK HERE