LAWRENCEVILLE, Ga. – Paul DeJong has been back in the minor leagues for a little over a week, the reason he is in a suburb north of Atlanta preparing for a game between the Memphis Redbirds and Gwinnett Stripers.

He knows why he is here – to find himself; whatever it takes, however long it takes.

“I needed to do something different, and I’m still not entirely sure what that is,” a candid DeJong said.

When the Cardinals optioned the former All-Star shortstop to Memphis last week, he was hitting .130 as a downward spiral that began during the Covid-summer of 2020 has not let up. Since DeJong returned in August of 2020, after having Covid, he has a composite average of .201.

DeJong is well aware of the numbers, just as he knows how much success he has had in the past, including his 30-homer, 31-double season in 2019.

That’s who he wants to be again – that’s how he wants to feel again. It’s how to make that happen which is the question he knows he has spent way too much time thinking about.

“I’m here just really to learn myself and figure out what I need to do on a daily basis to have some success and confidence,” DeJong said. “It’s evolving for me. I’m happy to have an opportunity to play every day and work on it.

“I wasn’t having fun (in the majors). I wish I was performing different but I can’t change that now. The only thing I can do is try to be good here and have fun… I’m approaching it with a positive attitude. I’m humbling myself being here, but it’s still an opportunity to play professional baseball. I enjoy my teammates and the staff. There’s really not too much to complain about.”

The demotion to Memphis, despite his poor start to this season, came as a surprise to DeJong. It happened weeks before he would have completed five years of service time in the majors, meaning he could have refused the assignment and become a free agent. He knows that was one factor in the timing of the team’s decision.

“I don’t blame the Cardinals,” he said. “I want to be right for this team for the long run … At first it was a shock and I was kind of torn up about it. But then I realized it was an opportunity and that I needed to prove who I am again.

“I’m not going to be scared to be able to fight back. That’s why I’m here … I can’t be afraid of the worst thing that’s going to happen because that is kind of already happening every day. At this point I’m in the depths and still facing it, trying to get to where I want to go.”

One way DeJong is trying to do that is by focusing on the process, not the results. He knows that he can hit a ball well, but a defender makes a good play and it’s recorded as an out instead of as a hit. A fly ball that falls a couple feet short of the wall becomes a sacrifice fly instead of a three-run homer.

DeJong got two hits on Thursday night, matching his total from his first five games in Memphis, and also drew a walk.

He knows he has been guilty in the past of overthinking his performance, of trying to analyze every aspect of an at-bat. He admits at times he was guilty of spending too much time thinking about analytics. Maybe, he thinks now, being here will give him more freedom and let him stop doing that.

There is not as much video of at-bats in Triple A as there is in the majors, which DeJong believes can help him change his mental focus; not looking for the flaws in his approach or his swing.

A lot of people have tried to point out what he has been doing wrong. He says now is the time to focus on what he can do, not what he hasn’t done.

“Maybe this is a blessing in disguise,” he said. “I have to try to figure out why I’m good … I need to evolve. In talking to guys like Jim Edmonds and Ryan Ludwick who have been through it, they are saying you have to change and evolve. You can’t just be the same guy. I’m starting to realize what they meant by that.

“I’m here really just trying to figure out myself, who I am and who do I have to be moving forward.”

Ludwick is now a minor league hitting instructor for the Cardinals and is with the Redbirds this week. He has talked with DeJong about a time in his career when he also had to go back down to the minors – before finding major-league success again.

“I told him my story,” Ludwick said. “We didn’t talk hitting. I just let him know I’ve been through the same thing … It’s happened to a lot of people. It’s all about how you deal with it. You can give up or you can keep fighting.”

Once he moved past the initial reaction to the demotion, DeJong has worked to keep a positive attitude. He admits that was hard to do when he was struggling in the major leagues.

“I had to be intentional about that,” DeJong said of his attitude adjustment. “I’m here to play baseball and  to be consistent. There should be no reason why I come to the field every day and worry about how I’m going to perform. I never felt like that in my career until maybe last year and this year. It’s just something I felt I never really recovered last year about how I finished and played.

“I had a great spring training (this year) but then things didn’t start off great for me during the season. I feel like this is my opportunity to finally overcome that since I didn’t overcome it last year. This is my chance to finally get over that hump.

“I keep waiting for something to click and lock in, but I think I’m thinking about that wrong. That’s now how it’s going to work. I think it’s going to be a constant battle and a constant fight and presence of mind to be able to compete here. That’s where I’m at. There’s no easy way back, and I don’t expect it to be easy.”

One of his teammates in St. Louis, and now in Memphis, is Lars Nootbaar. He said he has been impressed with how DeJong has approached his time in the minors, knowing even in his own case how hard it was getting sent down.

“The way he’s handled it has been unbelievable,” Nootbaar said. “You see sometimes when guys come down they are devastated and kind of show it a little bit. He’s taking it in stride and I really commend him and how he has handled it.” 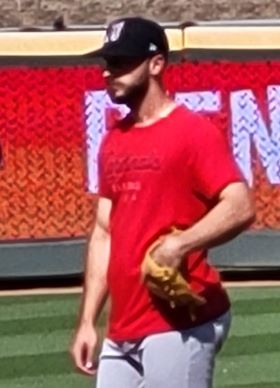 DeJong’s first week in the minors was spent in Norfolk, Va., followed by an eight-hour bus ride to Gwinnett County. At least the team had a sleeper bus, and DeJong had enough priority to get a bed. A six-hour ride to Memphis will follow Sunday’s game. There are no charter flights or five-star hotels in the minors.

When John Mozeliak, the Cardinals’ president of baseball operations, discussed the decision to send DeJong to Memphis, he made the comment that “he’s had a lot of voices in his ear and we need to simplify that.”

DeJong wants to hear one voice now – his own.

“For me today that’s not getting too far out in front. It’s not lunging. It’s letting the ball come to me and be in a strong balanced position and waiting for a good pitch to hit. It’s like Ted Williams said, the first rule of hitting is to get a good pitch to hit. That needs to be my focus every time I get in the box.”

What DeJong believes ultimately will get him back to being the player he used to be is to play the way he did on his way before he reached the Cardinals. He doesn’t want his mind to be cluttered; a case of paralysis by analysis.

“When I was first coming up or even in the minor leagues or in college, I didn’t know any better,” he said. “I didn’t know anything else. I didn’t know the outside world. I didn’t know Covid and all these things that were happening. Part of me wants to just find a way to flush all of that and just be a baseball player because that’s who I am.

“I want to try to flip everything that has been happening into something I can use to help me move forward. I want to 180 degree all of the bad things into opportunities to be better. That’s kind of what I am trying to do.”

DeJong has no idea how long it is going to take him to do that. At 28, he still believes he has a long future in the game with his goal still to reach 10 years in the majors. He’s halfway there.

To make it happen, DeJong knows he has to find the consistency in his game that has been missing for two years. He can’t have just one good at-bat. He has to have a long string of good at-bats in a row.

He knows that’s what it will take to get him back to the Cardinals.

When he gets back, he wants the game to be fun again. It hasn’t been that way for much of the last two years.

“I don’t think my best baseball is behind me,” DeJong said. “I believe it’s ahead of me. I just have to keep that presence of mind every day.

“There’s no doubt I’m doing everything I can to get back there. It’s also one of those things where it’s sort of out of my control. I know it’s going to take time. I can’t set a timeline or a deadline.  I’m still kind of in my entry into this assignment.

“I’ve seen the other side and I know what I am missing. But sometimes you have to go through stuff like this in order to more appreciate where I was. I’m going to keep fighting to try to get back there.”