Editor’s Note: There is a lot going on with the Memphis Redbirds and we wanted to take a road trip to see them. Rather than waiting until they got back to Memphis we decided to go to games they were playing in Gwinnett County, Georgia. Our travels took us through Nashville and we had been wanting to learn more about Franklin, Tennessee so we went there. We thought our readers would enjoy finding out about this town which is right near Nashville.

Nashville, Tennessee has long been a destination for music lovers, partly because it’s only about four hours from St. Louis and an easy drive. While most people know about Nashville, which is located in Williamson County– just down the road is a historic town called Franklin (visitfranklin.com).
Nashville and Franklin are two different experiences that complement each other. If you get the chance to visit both, it’s worth the trip.
Franklin has a 16-block Downtown historical district, which is the oldest section of the town and is composed homes and commercial properties including the public square and courthouse. Most of the buildings in this area were built in the 1800s.  It’s listed on the National Register of Historic Places and is full of unique shops, restaurants, antiques stores, entertainment, the arts and more.
The City of Franklin was founded in 1799 and was named after Benjamin Franklin. Franklin’s  close friend Dr. Hugh Williamson, was a member of the Continental Congress and the person for whom Williamson County was named. 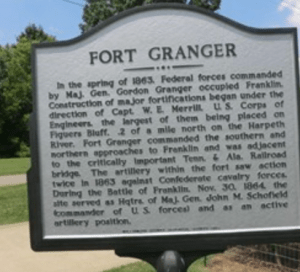 Franklin Tennessee was a peaceful  town until the Civil War when  Union troops occupied the area for nearly three years. Fort Granger was the Union fort built in 1862, after their forces occupied the state during the  Civil War.
The Battle of Franklin was fought on November 30, 1864, and proved to be a very deadly battle with more than 8,000 casualties. The town which started out as an affluent area went many years building back from the ruins of the Civil War. 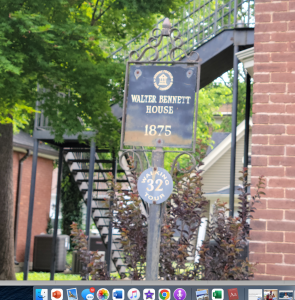 One could  dive into history for three hours or three days, there is enough to explore for all interest levels from battlefield tours, historic home tours, plus various guided and self-guided walking tours. The tours take you through the town with stops labeled, such as the Walter Bennett House, shown right. For the walking tours, you can stop by the Visitors Center and pick up the brochure that shows the various stops. For info on the walking tour CLICK HERE. 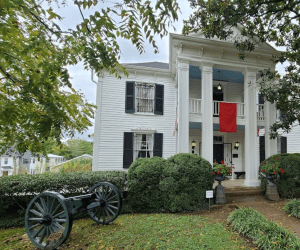 If you visit Franklin history buffs will like Lotz House which is a Civil War era house and museum. Carnton is an old historic farm house from that era also. During the Battle of Franklin it became a hospital with a Confederate cemetery built nearby.
Today, Franklin is one of the wealthiest cities in the United States and the seventh largest city in Tennessee. Many famous country singers live in Franklin including Tim McGraw and Faith Hill as well as Brad Paisley and his wife, actress Kimberly Williams-Paisley.
There’s a small town named Leiper’s Fork which is right near Franklin where a surprising number of stars live or own land, considering many have never heard of the place.  Keith Urban and Nicole Kidman  are among them as is Justin Timberlake and Chris Stapleton. Many are finding about it, but Naomi Judd and her husband Larry Strickland had lived there for 20 years before her untimely death this month.
Franklin is an upscale, quaint little town with its Historical Main Street– about a five-minute drive from the Drury Hotel we stayed at. It is a slice of Americana. The vast majority of the shops, restaurants, and performance venues are locally-owned gems. Food ranges from casual BBQ and Southern Meat & Three type options to full-scale chef-driven sophisticated experiences. Music also permeates everything in Franklin, with stages inside the historic theatre with its neon marquee, but also inside many of the restaurants, and shops. Franklin’s Main Street has been called “America’s Favorite Main Street” and was a highlight of Travel + Leisure naming Franklin one of the 50 Best Places to Travel in the World in 2022. 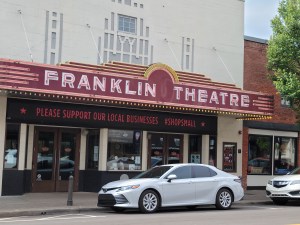 A nice stroll around the Downtown area takes you past shops and the old Franklin Theatre. Dating back to the 1930’s, The Franklin Theatre, which is a 300-seat live entertainment venue has been known for their diverse performing arts and philanthropy.
On Main Street and the surrounding area, you will pass cute little outdoor restaurants. At any given time there might be a Country Music executive meeting a producer, writer, or artist and they all blend in together. 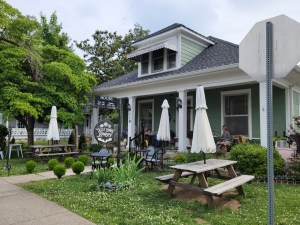 We especially liked a little  bakery called Triple Crown Bakery, shown in the photo, right which at about 9 a.m. was packed.
Their website says, “With a warm greeting as you enter the door, you are surrounded by the smells, sounds, and taste of a warm kitchen. The space is small, but that allows us to talk, laugh, and show customers the baking process. There are cozy tables inside, a large covered porch outside and tables on the lawn to enjoy a cup of coffee and pastry. We serve a casual tea or coffee service, along with grab and go sandwiches.”
It didn’t disappoint as far as the ambiance, at least the outdoor dining. It’s rated the number one bakery i the area by Yelp and got many favorable reviews.
It would be easy to imagine the stars having coffee at the bakery or  shopping on Main Street as there are some great local boutiques as well as some familiar ones like Chicos. Anthropologie, Wilder’s Boutique, and White’s Mercantile of Franklin.   One shop that caught our eye was called Philanthropy: Fashion with Compassion. They have upscale fashion and on their website they will take your prayer requests. 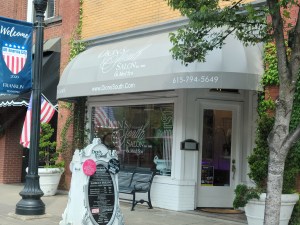 Along with the shops and food shops, are spas and hair stylists. Dion’s Salon advertised that they would “Absolutely” accept walk-ins. Unlike many other small towns with town squares, Franklins is booming with businesses and people spending money there.
It just so happened that when we were here they were setting up for the Franklin Rodeo. For those interested in making a road trip this weekend, you still have time to get there in time for the rodeo, which is taking place May 19, 20, 21. Check out their website for the schedule and for some free events that go along with the rodeo. 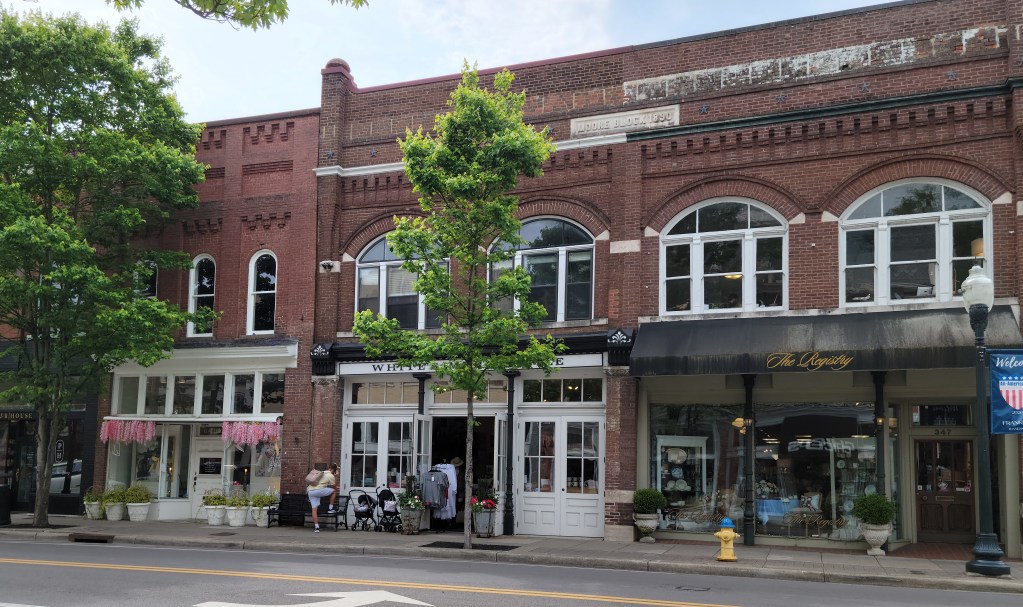 A large sign like you would see in an indoor metropolitan mall listed the businesses in the Historic Downtown area. 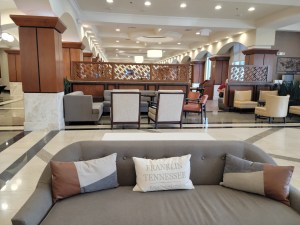 We had heard that the Drury Plaza Hotel in Franklin was recently renovated, so we decided to check it out. It is a beautiful and very large hotel. It has the Drury down-home feeling while being a sophisticated gathering place for both business travelers and families.
Located off of I-65 near Cool Springs Galleria, the Drury Plaza Hotel Nashville Franklin is just south of Nashville. While the Pancake Pantry is a famous breakfast spot in the area, we opted for the free hot breakfast the Drury serves every morning.
We arrived late in the day, just in time for the  hot food and cold beverage Kickback® they have starting at 5:30. They were serving barbecue pork which was great.

Now for those who want to be closer to the music world–the Drury Hotel offers several hotels in the Nashville area. Don’t forget to use the promocode SPORTS. It’s good for any Drury any time. We have the discount– you might as well use it.
Our trip was enhanced by finding out that the exact day we were in town, our good friend– St. Louis native Supe Granda– was performing with the Ozark Mountain Daredevils at the Grand Ole Opry. The Opry and Opryland is about 25 minutes from the Franklin Drury Plaza Hotel.
We did an article last December on Nashville and though it featured things to do at the holidays, we focussed on the music and stayed at another great Drury Hotel which is near Downtown Nashville with  the Ryman Theatre and the Bridgestone Arena nearby. CLICK HERE: https://stlsportspage.com/2021/12/16/nashville-is-a-great-holiday-getaway/