When starting pitcher Steven Matz had to come out of the game after throwing only four pitches, it looked as if it would be a long Sunday afternoon for the Cardinals.

It turned out it was the Pirates who had the long day.

All 10 Cardinals players who got an at-bat had at least one hit, drove in at least one run and scored at least one run in a blowout win that completed a sweep of the three-game series in Pittsburgh. It was the first time that had happened in franchise history.

Albert Pujols came into the game in the fifth inning and hit two homers, including one off position player Josh VanMeter, in a game that ended with Yadier Molina making his first career appearance on the mound – a week after Pujols pitched for the first time in his career.

They each had the same result, giving up two home runs and four runs.

The 18 runs were the second most the Cardinals have ever scored in a game in the modern era in Pittsburgh, trailing only a 19-4 win on May 20, 2000.

The Cardinals said Matz had complained of a stiff shoulder while warming up in the bullpen before the game. He is expected to be re-evaluated on Monday after the team returns to St. Louis.

At the plate: The Cardinals pounded out 20 hits even with their hottest player this month, Paul Goldschmidt, getting the day off … They sent at least nine batters to the plate in the second, fourth and ninth innings, scoring six times in the second, four in the fourth and five in the ninth, off VanMeter, an inning that included a two-run homer by Harrison Bader … Nolan Gorman had three hits and two RBIs in his second career start while Tommy Edman and Brendan Donovan also enjoyed a three-hit game …The team was 10-of-17 with runners in scoring position … The two homers from Pujols were numbers 682 and 683 of his career.

On the mound: Angel Rondon came in to relieve Matz, his third career appearance in the majors, and allowed just one hit while walking three over five scoreless innings. He struck out four as he earned his first career victory … T.J. McFarland followed with three scoreless innings of relief, allowing three hits, before turning the 18-0 lead over to Molina.

Worth noting:  Pujols has now homered off 444 pitchers in his career. This was the second time he homered off a pitcher who is normally a position player, having hit one off Josh Reddick of Arizona last year while with the Dodgers … Pujols has 32 career homers at PNC Park, the most ever by a visiting player … Dylan Carlson did not play after leaving Saturday’s game with a tight hamstring. He also is expected to be re-evaluated on Monday … Rondon was activated from the taxi squad with Saturday’s starter, Matthew Liberatore, optioned to Memphis after making his major-league debut. Liberatore could come right back, however, if Matz has to go on the injured list … Lars Nootbaar, who might be called up if Carlson has to go on the IL, hit three homers, including a grand slam, and drove in seven runs for Memphis on Sunday at Gwinnett.

Looking ahead: Miles Mikolas will get the start on Monday night as the Cardinals begin a quick two-game series against the Toronto Blue Jays at Busch Stadium. The Brewers and Padres will follow the Blue Jays to St. Louis on a nine-game homestand.

We’ve been checking every day and today they just put up the Nolan Gorman gear. Click this link: fanatics.93n6tx.net/15dLjd 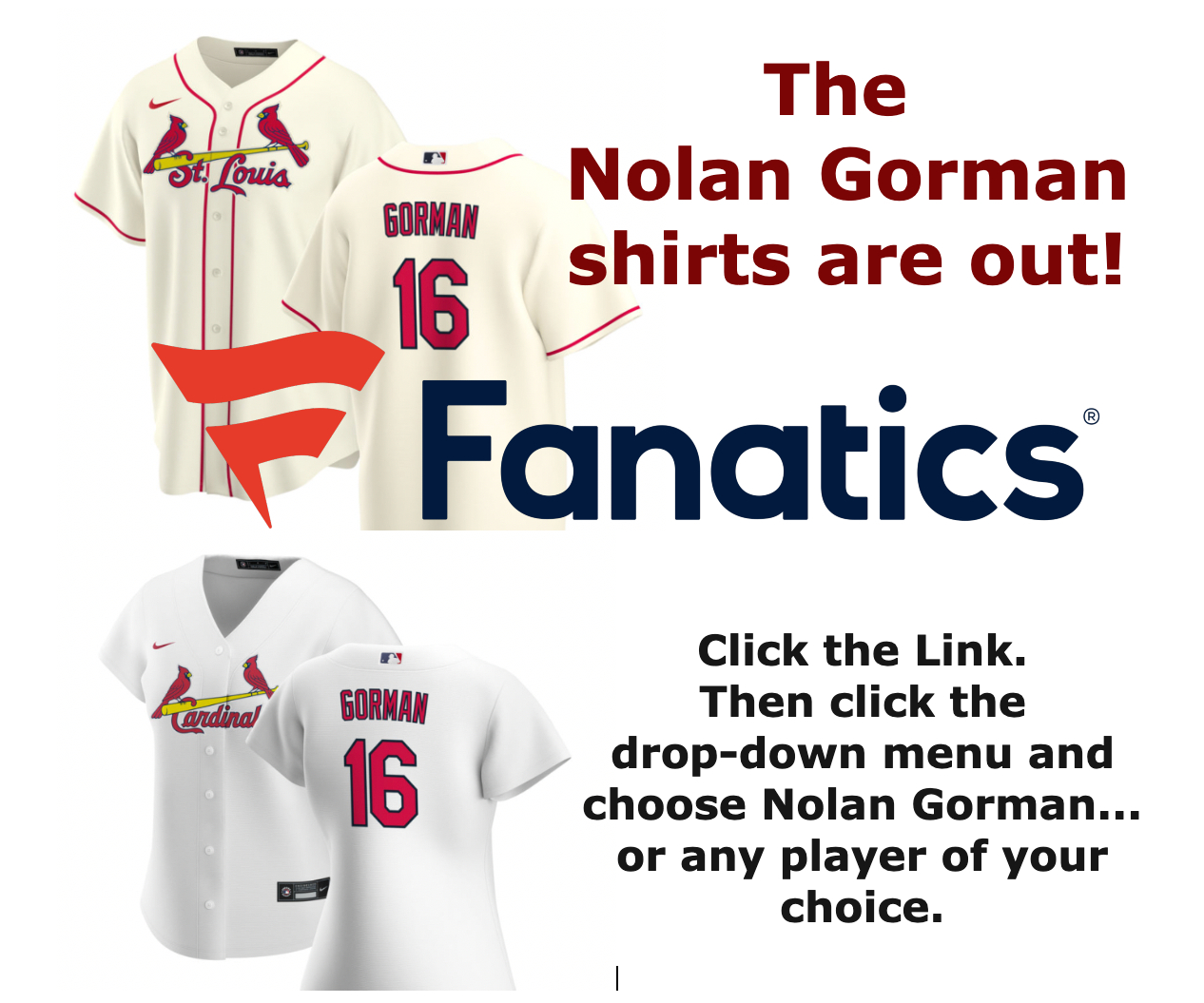