On Wednesday, mlb announced the all teams will observe Lou Gehrig Day on Thursday, June 2nd   with efforts including special moments at Major League ballparks and reflections of stories about individuals who have been affected by Amyotrophic Lateral Sclerosis (ALS), otherwise known as “Lou Gehrig’s disease.”
The St. Louis Cardinals are on the road on June 2, so they will observe Lou Gehrig day on June 13.
Ways the Cardinals will observe the day: 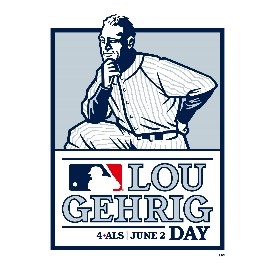 Hall of Famer Lou Gehrig joins fellow Baseball Legends Jackie Robinson and Roberto Clemente as the only players whose legacies are celebrated annually with dedicated, league-wide days. June 2nd was specifically chosen as the date for Lou Gehrig Day as it marks when Gehrig became the Yankees starting first baseman, thus cementing the start of his incredible streak of consecutive games played, as well as the day he passed from complications of Amyotrophic Lateral Sclerosis (ALS), otherwise known as Lou Gehrig’s disease.

The focus of Lou Gehrig Day will be on three pillars: (1) remembering the legacy of Gehrig and all those lost to the disease that bears his name; (2) raising awareness and funds for research of ALS and supporting the needs of the ALS Community; and (3) celebrating the groups and individuals who have led the pursuit for cures. This special occasion follows a campaign led by the “Lou Gehrig Day Committee” (www.lg4day.com), which is comprised of individuals, family and friends affected by ALS, as well as organizations leading the way on awareness and fundraising for the movement to end the disease.