Nolan Gorman has already had more than a few moments to remember in his first 29 games in the major leagues. He added another to the list on Tuesday night.

Gorman had the first multi-homer game as part of a four-hit, four-RBI night that carried the Cardinals to the win over the Brewers in Milwaukee.

At age 22, he became the first rookie and youngest player in franchise history to enjoy that kind of night.

He became the youngest player in team history to hit two homers in a game since Albert Pujols in 2001, and the only younger players to do it were Stan Musial and Joe Medwick, all three of whom did it when they were 21 years old.

At the plate: Gorman’s homer in the fourth was the only hit for the Cardinals between his first-inning single and his homer in the seventh, with Brendan Donovan the only other Cardinal to reach base over that stretch when he walked in the third … Leading 4-2, the Cardinals added two insurance runs in the eighth on consecutive singles by Tommy Edman, Donovan and Nolan Arenado and the one-out single by Gorman, who had the second four-hit, four-RBI game of his young career … Dylan Carlson drew a walk for the seventh consecutive game.

On the mound: After the Cardinals took a quick 2-0 lead, Jack Flaherty gave it back two hitters into the bottom of the first with a walk and a home run by Willy Adames. Those were the only runs Flaherty allowed in three innings in his second start since returning from the injured list, but he also walked five and had to strand two runners in both the second and third innings … The combination of Flaherty, Zack Thompson, Drew VerHagen, Giovanny Gallegos and Ryan Helsley did not allow a hit after the second inning until Helsley gave up a one-out double in the ninth, retiring 19 of 20 Milwaukee batters over that stretch.

Key stat: The previous youngest players with four hits, two homers and four RBIs in a game for the Cardinals were all 23 years old – Joe Medwick in 1935, Les Bell in 1925 and Jim Bottomley in 1923.

Worth noting: Combined with his 15 homers in Memphis before he was promoted to the majors, Gorman has hit 22 homers in 226 at-bats this season … Paul Goldschmidt was out of the lineup because of lower back tightness. The move was said to be precautionary, after Goldschmidt served as the DH on Monday, with the hope that he will be able to play in the field on Wednesday …Jordan Hicks began a rehab assignment by throwing one scoreless inning for Memphis at Indianapolis. He walked the first batter he faced, then got a double play and a groundout in his 14-pitch appearance.

Looking ahead: Adam Wainwright will get the start on Wednesday night.

About stlsportspage 1872 Articles
For the latest news and features in St. Louis Sports check out STLSportsPage.com. Rob Rains, Editor.

Jose Quintana will be the starter for the Cardinals today in game one of the wild-card best-of-three series against the Phillies at Busch Stadium. The game is set to begin at 1:07 p.m. and will be televised by ABC.

Quintana, acquired by the Cardinals from the Pirates on Aug. 1, did not allow more than two earned runs in any of his 12 starts for the Cardinals. In his six starts since Sept. 6, he allowed a total of three runs in 33 1/3 innings. 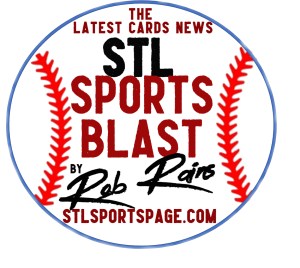