NOTE: This will be the clearinghouse for information on the 2022 All-Star Game on STLSportsPage.com. Check back for updates.

SCROLL DOWN FOR ALL-STAR NEWS.

Jackson Holliday, the son of Matt and Leslee Holliday was the first pick in the MLB Draft. He was picked by the Baltimore Orioles

With their pick in second round, the Cardinals select LHP Brycen Mautz from University of San Diego.

Randy Flores spoke to the media after the pick. Check out Rob Rains’ article to hear what he had to say.

For Rob Rains’ Day ! Recap on the draft: CLICK HERE. 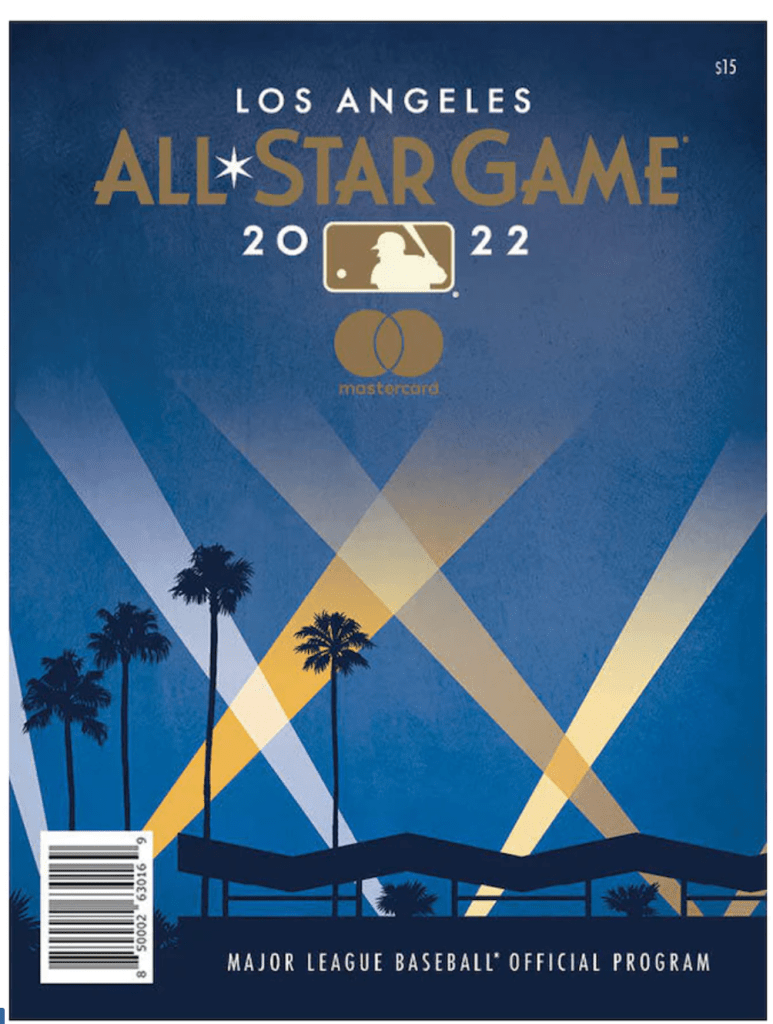 The Cardinals will be represented by: Paul Goldschmidt, Albert Pujols, Miles Mikolas, and Ryan Helsley.

The Cardinals will have four players in the All-Star Game. Nolan Arenado has pulled out for medical reasons. 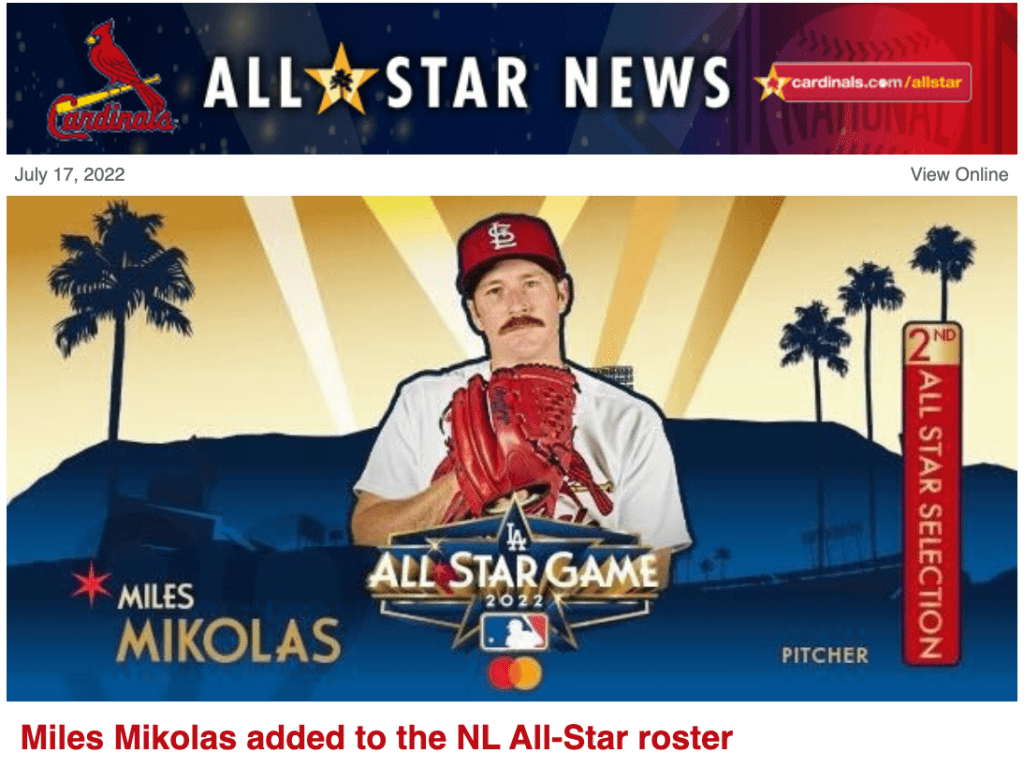 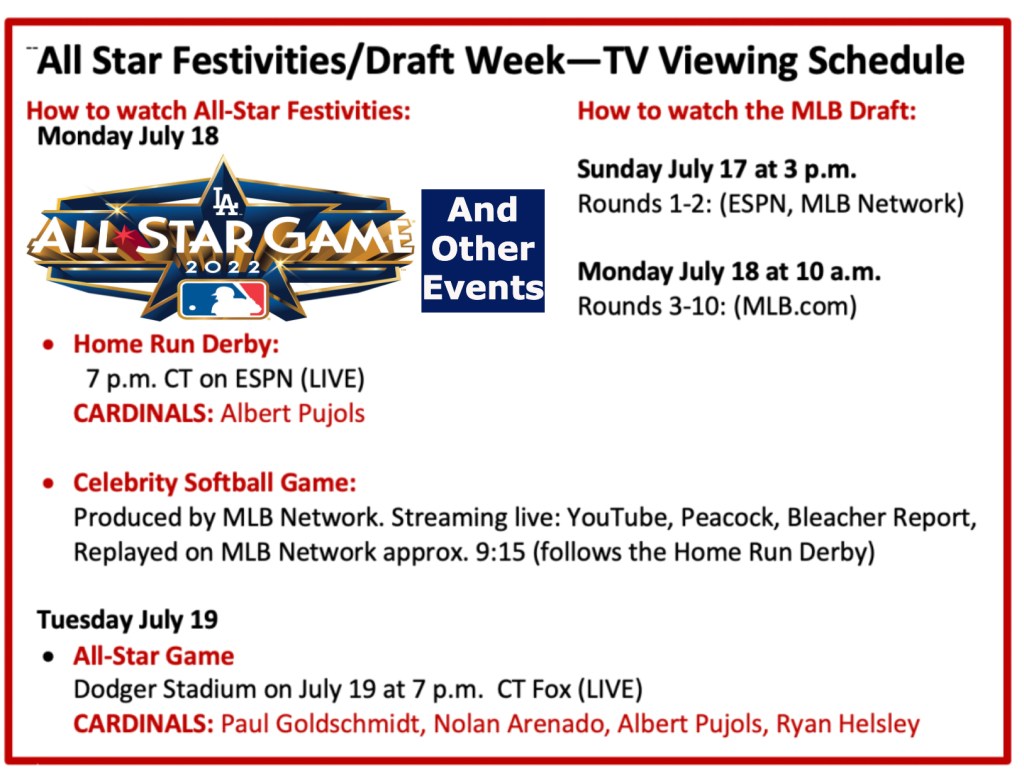 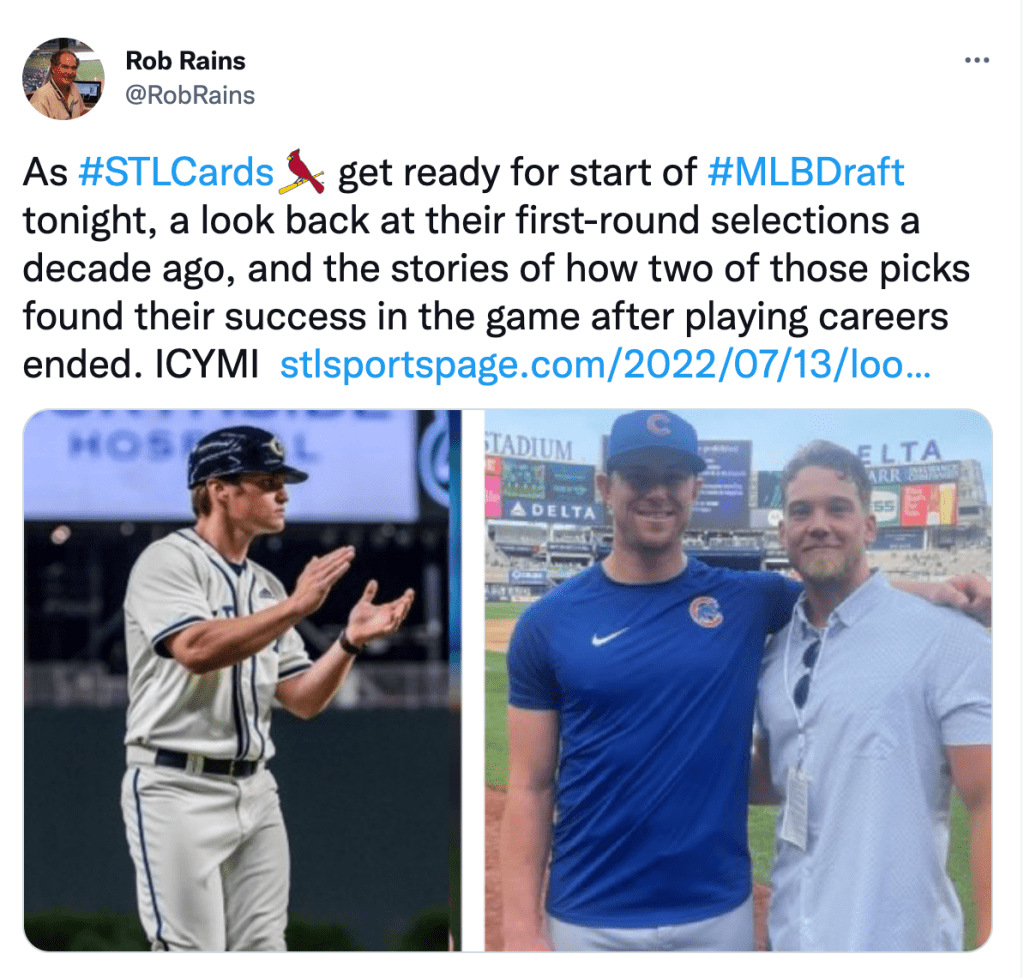 UPDATE: Nolan Arenado has decided to skip the All-Star game because of tightness in his lower back, which has been bothering him for several weeks,

Players from the Cardinals organization who will be in the Futures Game are Jordan Walker and Masyn Winn.

The game, which will be produced by MLB Network, will stream live on YouTube, Peacock, Pluto TV, Bleacher Report and across MLB’s social platforms. MLB Network will air the game on Monday, July 18, at 10:30 p.m. ET/7:30 p.m. PT with Robert Flores and Lauren Gardner on the call, marking the first time MLB Network has televised the gam 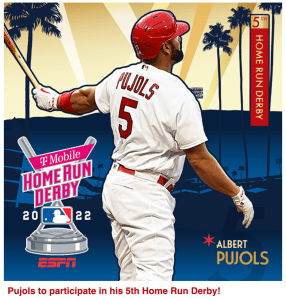 Albert Pujols will compete in the 2022 T-Mobile Home Run Derby on Monday, July 18th at Dodger Stadium. This will be his 5th Home Run Derby. Catch all of the action Monday Night at 7 p.m. CT on ESPN! 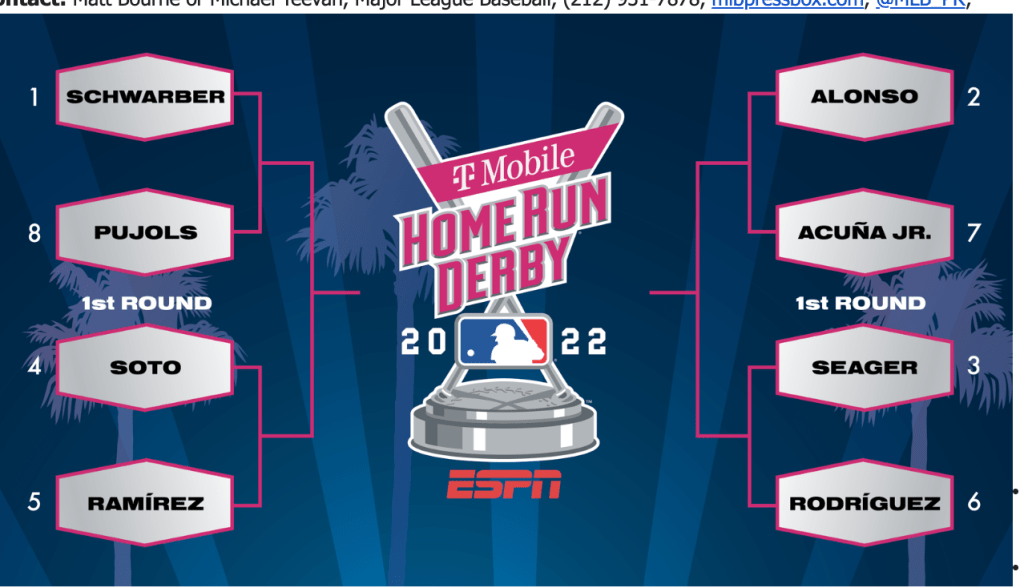 UPDATE: Nolan Arenado has decided to skip the All-Star game because of tightness in his lower back, which has been bothering him for several weeks,

The commissioner chose Albert Pujols as a starter with his special pick. First baseman Paul Goldschmidt has been selected to start the 2022 MLB All-Star Game presented by Mastercard for the National League. Nolan Arenado came in second among National League third basemen so he will be on the team but not as a starter. Manny Machado who came in first has been injured lately so that could change for Arenado. Ryan Helsley was added as a relief pitcher.

It’s Goldschmmidts eighth All-Star selection, his third as a starter and his first start since 2015. 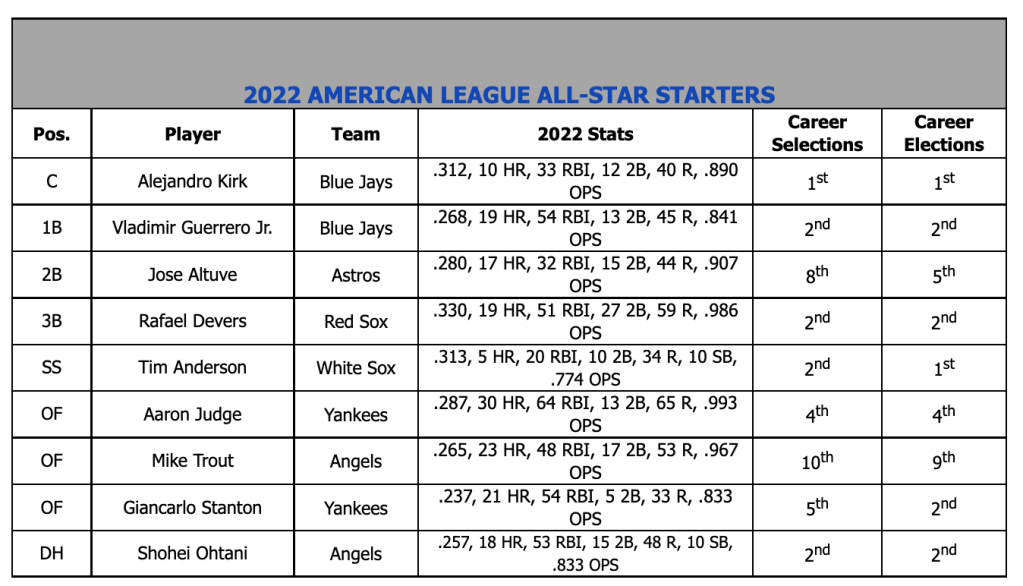 The 92nd Midsummer Classic will be televised nationally by FOX Sports; in Canada by Rogers Sportsnet and RDS; and worldwide by partners in more than 180 countries.  FOX Deportes will provide Spanish language coverage in the United States.  ESPN Radio will provide exclusive national radio coverage of the All-Star Game, while Univision will provide Spanish language coverage on radio.  MLB Network, MLB.com and SiriusXM also will provide comprehensive All-Star Week coverage.  For more information about MLB All-Star Week, including ticket information and updates, please visit

Legendary Sluggers to Be Celebrated at Dodger Stadium’s Midsummer Classic

Pujols spoke with the media after being selected.

Commissioner of Baseball Robert D. Manfred, Jr. announced today that a pair of the game’s legendary hitters, Albert Pujols of the St. Louis Cardinals and Miguel Cabrera of the Detroit Tigers, will be celebrated at the 2022 All-Star Game at Dodger Stadium, where they will be active in the Midsummer Classic.  Pujols and Cabrera are two of the three players in history to register 3,000 hits, 500 home runs and 600 doubles, along with Hall of Famer Hank Aaron.

Commissioner Manfred said: “I am delighted that Albert Pujols and Miguel Cabrera have agreed to participate in the All-Star Game.  Albert and Miguel are two of the most accomplished players of their generation.  They have also represented the baseball traditions of the Dominican Republic and Venezuela with excellence for the last two decades.  Albert and Miguel are two all-time greats whose achievements warrant this special recognition.”

The final season of Albert’s 22-year career, including his 12th as a Cardinal in his 2022 return to St. Louis, now features his 11th career All-Star selection.  He spent a decade with the Los Angeles Angels before joining the Los Angeles Dodgers for the majority of the 2021 season.  Pujols and former teammate Mike Trout share the lead among active players with three career Most Valuable Player-winning seasons.  He ranks fifth in MLB history with 683 home runs, the most all-time by a player who was born outside of the United States.  “The Machine” now ranks ninth all-time with 3,326 hits.  He played for the DR’s national team in the inaugural World Baseball Classic in 2006.  Pujols, the 2008 recipient of MLB’s Roberto Clemente Award for excellence on and off the field, is a nominee for ESPN’s 2022 Muhammad Ali Sports Humanitarian Award for his charitable work, including through the Pujols Family Foundation.

This marks Cabrera’s 12th All-Star selection in his 20-year career.  In April, Cabrera became the 33rd player in Major League history, including the first Venezuelan player, to reach 3,000 hits.  The two-time American League MVP leads all Venezuelan-born players in hits (3,065), home runs (505), batting average (.310), slugging (.528) and many other offensive categories.  In 2012, Cabrera ended the longest gap between Triple Crowns in MLB history (previous: 1967 by Hall of Famer Carl Yastrzemski) and became the first Latino player to win the Triple Crown, the 12th in MLB history.  Cabrera has represented Team Venezuela in all four editions of the World Baseball Classic.  In 2012, he established the Miguel Cabrera Foundation, which has benefited such organizations as the Children’s Hospital of Michigan Foundation and C.S. Mott Children’s Hospital.  In response to the COVID-19 crisis, Miguel and Rosangel Cabrera partnered with the Detroit Tigers Foundation to donate $250,000 to benefit children and families in Detroit.  In 2021, he volunteered to serve as a co-chair of the Protect Michigan Commission in support of the state’s COVID-19 vaccination and education efforts.

The All-Star Game will be televised nationally by FOX Sports; in Canada by Rogers Sportsnet and RDS; and worldwide by 70 partners in 16 languages across 210 countries and territories. FOX Deportes will provide Spanish language coverage in the United States, while ESPN Radio and Univision Radio (Spanish) will provide exclusive national radio coverage of the All-Star Game. For ongoing MLB All-Star Week information, please visit AllStarGame.com and follow @MLB. MLB Network, MLB.com and SiriusXM also will provide comprehensive All-Star Week coverage.

Rosters for the 2022 SiriusXM All-Star Futures Game, which will be played at 7:00 p.m. (ET)/4:00 p.m. (PT) on Saturday, July 16th at Dodger Stadium in Los Angeles, were announced earlier today by Major League Baseball.  An introductory list of eight names were announced yesterday on MLB Network Radio on SiriusXM, and the complete rosters were unveiled earlier this afternoon on MLB Network’s “MLB Central.”

The 2022 SiriusXM All-Star Futures Game features the top Minor League prospects competing as part of the first-ever All-Star Saturday.  The Futures Game will once again feature a National League vs. American League format, which was introduced in 2019 following 20 years of U.S. vs. World matchups.  The game, which is scheduled for seven innings, will be live on Peacock and SiriusXM, and MLB Network will re-air the contest beginning at 9:00 a.m. (ET)/6:30 a.m. (PT) on Sunday, July 17th.  MLB Network will produce the telecast with Scott Braun (play-by-play), Yonder Alonso (analyst), Jim Callis (analyst) and A.J. Andrews (reporter).  Last year in Colorado, the NL claimed an 8-3 victory, led by Chicago Cubs prospect Brennen Davis, who earned MVP honors after homering twice in the contest.

Each Major League organization is represented and players from all player development leagues were eligible to be selected.  Complete Futures Game rosters, prospect analysis and rankings can be found at MLB.com/pipeline. The Cardinals will be represented by Jordan Walker and Masyn Winn.

SiriusXM will provide live play-by-play coverage of the SiriusXM All-Star Futures Game on MLB Network Radio.  The game can be heard by SiriusXM subscribers on SiriusXM radios (channel 89), on the SXM App and online at SiriusXM.com/mlb.

Gates open at 2:00 p.m. (PT) on All-Star Saturday with the first 10,000 fans to receive a special All-Star souvenir giveaway.  Tickets for All-Star Saturday, which are available now, can be purchased at AllStarGame.com.

All-StarGame.com and follow @MLB and @AllStarGame on social media.