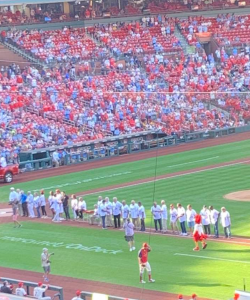 The St. Louis Cardinals hosted a 40-year anniversary reunion of the 1982 World Series Championship team at Busch Stadium on Saturday, August 13. The reunion started on Friday Aug. 12 with some of the festivities.

The current Cardinals tried to provide a memorable day as well Wainwright had a no-hitter going until there were two outs in the seventh inning, then gave up a homer in the eighth that tied the game 1-1. The Brewers scored two runs off Giovanny Gallegos in the 10th inning to beat the Cardinals 3-2 on Saturday night at Busch Stadium, spoiling a great start by Adam Wainwright.

The 1982 players arrived on Friday, but the big tribute came before Saturday’s game. Throughout their weekend they enjoyed seeing one another and reliving memories. Several of the players have passed away but they were represented by family members. 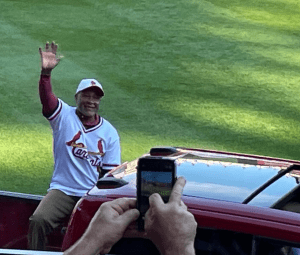 Fans may have seen or heard some of the players on radio or TV throughout the weekend. Ozzie Smith (shown in the photo, left), who makes his home in St. Louis was among those who took place in a car parade. Memories of that 1982 World Champions parade as well as Opening Days of the past abounded as the players circled the field, met by wild cheers from the fans. 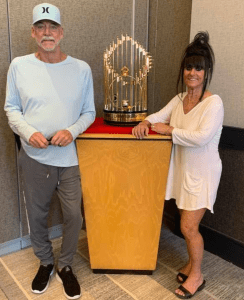 Many of the players brought their wives and some who have been married since the ’82 season enjoyed catching up such as Mike and Merle Ramsey, who live in Florida, and Tom and Kim Herr who live in their home state of Pennsylvania. The Ramseys are shown in the photo, right, next to the World Series trophy.

The World series trophy was one of the highlights for the families. 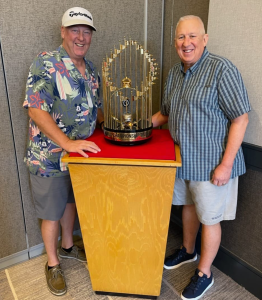 Dave LaPoint, who traveled from Florida to be at the reunion, had his photo taken with Frank Coppenbarger, (shown left) who worked in the Cardinals clubhouse at the time

John Stuper and Dave LaPoint went over to the Gateway Grizzlies game and did a meet and greet for fans, so even more fans got the chance to meet and talk to Cardinals from this Championship team. 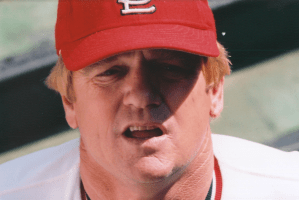 Fans were able to see many of the players that Whitey Herzog managed, and the former Cardinals skipper will be there.

Herzog continued to live in St. Louis after his managerial career with the Cardinals and has been visible in the community. In 2020, Herzog and his foundation The Whitey Herzog Youth Foundation donated a significant amount of money to help build a wheelchair playground at Watson Trails Park in Sunset Hills, the vicinity he lives in.

He was inducted into the Baseball Hall of Fame in 2010.

Over 20 former players and staffers from the 1982 team, including National Baseball Hall of Famers Ozzie Smith, Bruce Sutter, Jim Kaat, and Herzog, as well as Cardinals Hall of Famers Willie McGee, Keith Hernandez & Tom Herr, are scheduled to take part in a pregame ceremony before that evening’s 6:15 PM game against that year’s World Series opponent, Milwaukee Brewers. 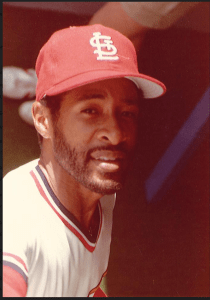 Fans remember the famous backflips that  Ozzie Smith (shown left) would do as he ran onto the field. In the 1982 World Series he scored three runs, had five hits, and did not commit an error in the field. Smith, who works with the Cardinals on a TV show called Cardinals Insider, has kept a high profile in the St. Louis area since retiring from playing.   He was enshrined int he Baseball Hall of Fame in 2002.

Beginning at approximately 5:30 PM, members of the 1982 team will parade along the Busch Stadium warning track and be individually introduced at home plate.  The ceremony will conclude with a ceremonial first pitch and a team photo with the World Series trophy at home plate. 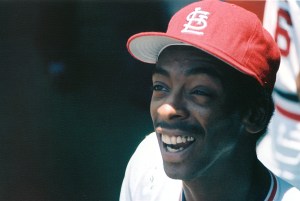 McGee (shown right) was always one of the most popular players with the fans and continues to be a fan favorite since he has been with the team again as a coach since 2017.

That day, 25,000 fans, age 16 and older, will take home a 1982 “Final Out” double bobblehead featuring Bruce Sutter and Darrell Porter, presented by Coca-Cola and Schnucks.

Despite not reaching the playoff the previous 13 seasons, the 1982 Cardinals entered the season with high expectations after finishing the previous strike-shortened season with the best winning percentage in the National League Eastern Division.  Before stepping down as General Manager on Opening Day, Manager Whitey Herzog fortified the roster with offseason trades for Ozzie Smith, Willie McGee, Lonnie Smith, Steve Mura and re-signed free agent Joaquin Andujar. 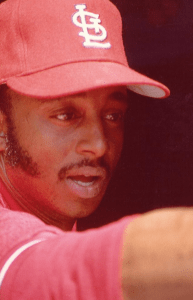 Speaking of Lonnie Smith (shown left), he had his only All-Star year in 1982.

The 1982 team was characterized by a style of baseball focusing on aggressive base running, exceptional defense and solid pitching that became known as “Whiteyball”.  The organization’s strategy paid off as the team stole 200 bases while hitting just 67 home runs, the fewest in all of MLB, and stayed in first place for all but 48 days of the season as they claimed their first ever National League East Division title.  A three-game sweep of the Atlanta Braves in the NLCS advanced the Cardinals to their 13th World Series appearance against the first-time American League Champion Milwaukee Brewers.

Despite a break-out performance from rookie Willie McGee in Game 3, which saw him hit two home runs and rob 1982 MLB home run leader Gorman Thomas of a late-inning homer, the Cardinals returned to Busch Stadium for the potential final two games of the World Series down three games to two.  After St. Louis’ 13-1 drubbing of the Brewers in Game 6, the two teams’ aces, Joaquin Andujar and Pete Vuckovich, opposed each other in a tightly-contested Game 7.  With the Cardinals trailing 3-1 entering the bottom the sixth inning, Keith Hernandez tied the game with a bases-loaded two-run single followed by a go-ahead RBI single from George Hendrick.  The Cardinals would add two insurance runs in the eighth inning and, after seven strong innings from Andujar, closer Bruce Sutter pitched a perfect eighth and ninth inning to secure the club’s ninth World Series Championship. 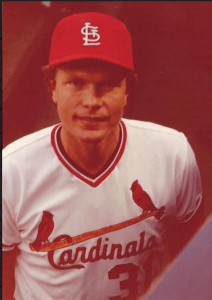 There are several players who will be missed at the reunion as they have passed away: pitchers Bob Forsch and Joaquin Andujar, and catcher Darrell Porter. Forsch was a big part of the success of the 1982 team. He went 15-9 with a 3.48 ERA during the regular season.  He won a game in the NLCS but lost both starts in the World Series games against the Brewers. Forch died suddenly in 2011. The ironic thing was he was feeling fine the week he passed away and in fact  threw out the ceremonial first pitch before game seven of the 2011 World Series. 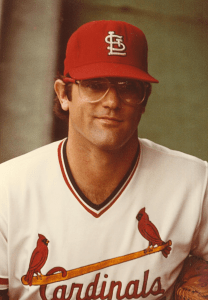 Darrell Porter played in three World Series, one with the Royals and two with the Cardinals. He won both the   NL Championship MVP Award and the World Series MVP Award, both in 1982. 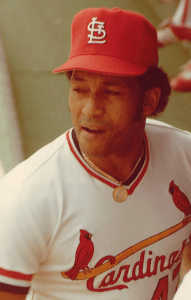 Andujar, who gave himself the nickname “One tough Dominican” and coined his own phrase “YouNeverKnow” which he used many times in interviews. He won a game in the NLCS and then won two of the 1982 World Series games.

Tickets for the 40th anniversary reunion are on sale now at cardinals.com, via phone at 314-345-9000 or at the Busch Stadium Box Office.  Fans can visit cardinals.com/1982 for more information. 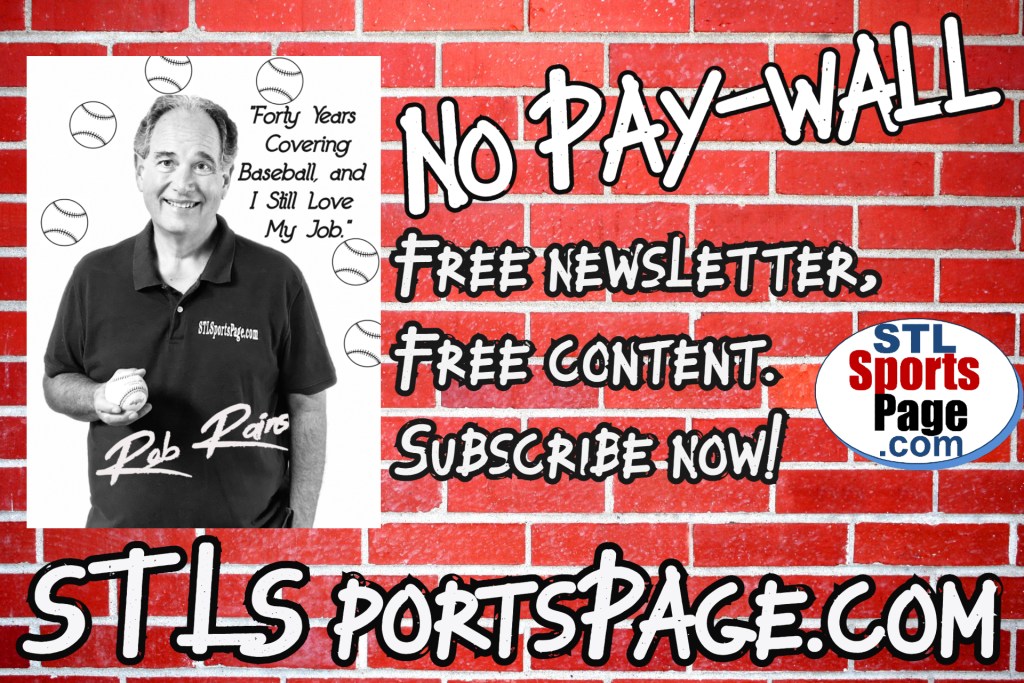