Lee Thomas who once worked for the Cardinals and was from the St. Louis Area passed away on Wednesday. Thomas was born in Peoria, Illinois in 1936 and his family eventually moved to St. Louis, where he went to Beaumont High School. He signed with the Yankees after graduation and was a right fielder and first baseman when playing in the majors.

Thomas joined the Cardinals organization in 1970 first as a bullpen coach and then he managed at the minor league level before moving into the Cardinals’ front office in 1975, becoming traveling secretary. In 1980 he became the director of player development and was instrumental in the organization’s successful run in the 1980’s under Whitey Herzog when they won the NL pennants in 1982, 1985, and 1987 and the World Series in 1982. 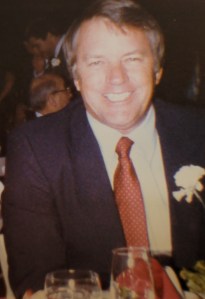 He left the Cardinals to become the general manager for the Phillies where the team won the pennant in 1993 under his tenure. He also spent nine years as a scout for the Red Sox and Orioles late in his career.

He kept his home in St. Louis and had been suffering with a long illness before passing away.

“He was a great baseball man and an even better person,” said Rob Rains. “It was an honor and privilege to know him and I always enjoyed seeing him at the ballpark and having conversations about what was happening in the game.

“He was a true friend and I will miss him.”

The photo, left was taken at one of the many dinners and events we saw him at and is courtesy the Rains family.

As the architect of the club, Thomas was credited with building the roster that captured the National League pennant in 1993, one year after they finished in last place. From 1989-93, he acquired John Kruk, Terry Mulholland, Curt Schilling, Lenny Dykstra, Milt Thompson, Danny Jackson and many others, setting the stage for the Phillies’ improbable run. Ultimately, 80 percent of the Phillies postseason roster in 1993 had been acquired via free agency or trade by Thomas. That season, during which he also selected future stalwart third baseman Scott Rolen in the June amateur draft, he was named Sporting News Executive of the Year.

“Lee was a great man and will be missed incredibly,” said Phillies Chairman Emeritus Bill Giles. “I will never forget all the fun we had watching the 1993 Phillies National League championship team that he put together. Through his leadership, Lee has left an indelible mark on Phillies history. My love goes out to his wife Susie and his entire family.”

Born James Leroy Thomas on Feb. 5, 1936, in Peoria, Ill., “Lee,” as he became known, excelled in basketball, football and baseball in his high school days. He would wind up with a career in the latter that spanned parts of six decades as a player, coach, manager, scout and executive.

He remained with the Cardinals past his playing days, holding positions as a bullpen coach and manager in the minors, before moving to the front office. Thomas first worked in sales and promotions, then as traveling secretary before becoming the club’s director of player development in 1980. During his tenure with the Cardinals, the team won three pennants and the World Series. He was hired by the Phillies on June 21, 1988, as vice president of player personnel. Thomas was later promoted to vice president, general manager and finally to senior vice president, general manager in 1992.

Following his nine-and-a-half-year stint at the helm of Philadelphia’s baseball operations, the third-longest in club history, he spent six seasons with the Red Sox as a special assistant to the general manager. He then served as a scout for the Milwaukee Brewers until 2006, and from 2011-18 was with the Baltimore Orioles as a special assistant. Thomas was inducted into the Missouri Sports Hall of Fame in 2008.

Thomas is survived by his wife Susie and his sons Matthew, Scott, Deron and Daryl.