For the 325th time, beginning in 2007, Wainwright and Molina started a game together for the Cardinals, setting a major-league record that legitimately likely will never be broken. As Wainwright met with the media after the game, he was surrounded by beer cans with his picture on them.

Remember when Matt Carpenter had his salsa? The latest in collector item food and drink are the colorful Yadier Molina-Adam Wainwright souvenir beer cans. 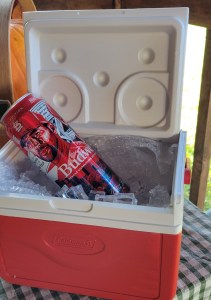 Fun fact: they saw the cans for the first time while filming the piece together. Their authentic reaction to seeing the cans for the first time was captured here, where they remarked joyfully, exclaiming: “We’re on the front of a Budweiser can! That’s big time.” They also filmed a special “Thank you” to the city of St. Louis, which they’ve called home these 17 seasons. Check it out here.

The cans feature a custom illustration of both Yadi and Waino, and the phrases “Legendary Teammates” and “17 seasons together” as a nod to their incredible legacy, which they continue to build on as they approach this record-breaking milestone. A few other elements include:

The souvenir beer cans can be found at area grocery stores.