Thursday Sept. 29 was the first in a series of events that Rob Rains and STLSportsPage.com will be hosting for our readers. It was a ladies luncheon for the first one– “Diamonds are a Girl’s Best Friend”  held at Circle 7 Ranch Restaurant in Des Peres turned out to be a big success. There were 14 spots available and all were taken.

“We want to get to know our readers and let them get to know us,” said Rains. “One of the ways we can be different than the local newspaper is to be personal with those who read our articles and subscribe to our newsletter. This is why we do so many contests, including the annual NCAA Bracket Challenge and our Spring Training Party– all free of charge to our readers.”

Rains was a few minutes late as he was on KFNS with Frank Cusumano, but Sally Rains kept everyone entertained until he got there. Many of the women in attendance are season ticket holders or attend lots of games. 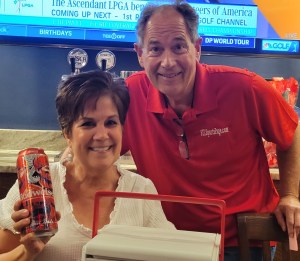 Each woman who attended went home with a Cardinals vest, thanks to the St. Louis Cardinals. They will be great for the chilly post-season games that will be played in St. Louis.

There were also drawings and two people including Tara McMahon, shown right, with Rob Rains won a Coleman’s mini-cooler with a souvenir Yadier Molina-Adam Wainwright “Best Buds” oversized can of Budweiser. Two of those prizes were given out and two Cardinals snack packs were given out.

When Wainwright and Molina officially broke the all-time start record for a pitcher-catcher duo with 325 starts, a record held since 1975, on 9/14 against the Brewers, Budweiser, who is the longest-running MLB sponsor came up with the special, “Best Buds” campaign and the special commemorative can.The cans feature a custom illustration of both Yadi and Waino, and the phrases “Legendary Teammates.” 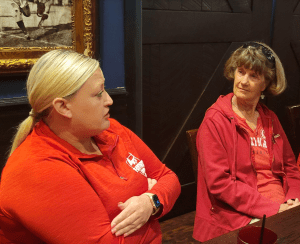 Whitney Clark of the Cardinals, shown left, came and told about the various Fantasy Camps the team offers. STLSportsPage.com had just featured a family that participated in two fo the camps and it meant so much to them. She talked about how special the camps are for people who attend, how the families have the chance to participate and also how the campers who come back feel like there has been a “family” created with the other players at the camps. 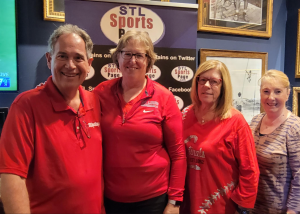 Patty Wood and Paula Reagan drove in from Washington, Mo. They are shown in the photo, right with Tammy Voyles. They are all volunteers with Cardinals Care so they gave some experiences they had at the various charity events including the Winter Warm-Up.

Participants at the luncheon had questions for her and everyone loved hearing about the Fantasy Camps.

Rob Rains talked about the Cardinals and one of the most popular questions that everyone wanted to know was “who do you think will be in the World Series?” He did not commit but said he thought the Braves and the Astros were the two best teams.

Other questions were about Wainwright’s future, the playoff roster, and the pitching rotation for the post-season. 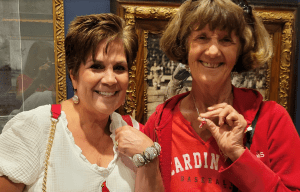 The name of the luncheon was “Diamonds are a Girl’s Best Friends” with the play on words with the baseball diamond, so many of the participants wore Cardinals clothes with bling. The photo, right, shows Tara McMahon showing off her sparkly baseball bracelet and earrings; and Pat Barrett, who is an usher at Busch Stadium showing off her jeweled Cardinal bird necklace. 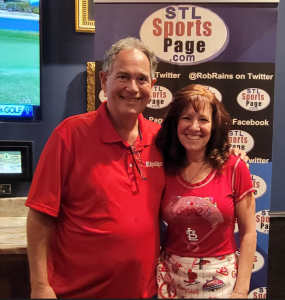 Nan McArthy, (shown with Rains, left) who lives in Sarasota, Florida but comes back to her hometown of St. Louis both to watch Cardinals games and to visit family, had a tee-shirt that said, “Diamonds are a Girl’s Best Friend” on it. She is such a big Cardinals fan that she has been known to drive by herself from Florida to St. Louis in time for a special Cardinals game.

She also likes to drive over from Sarasota to Jupiter for Spring Training.

The next meet-up event with Rob Rains and STLSportsPage has not been set, but if interested in being contacted about it or if you have any ideas, email us at: STLSportsPage@gmail.com.

Rains’ email newsletter is getting a new look– now called “The STL Sports Blast” and that is where the contests and special events are promoted, so be sure to subscribe. CLICK HERE.

Subscribe to the newsletter– and join in the fun.

Thanks to Keith Dodel, owner of Gene-Del Printing for partnering with us for the signs. 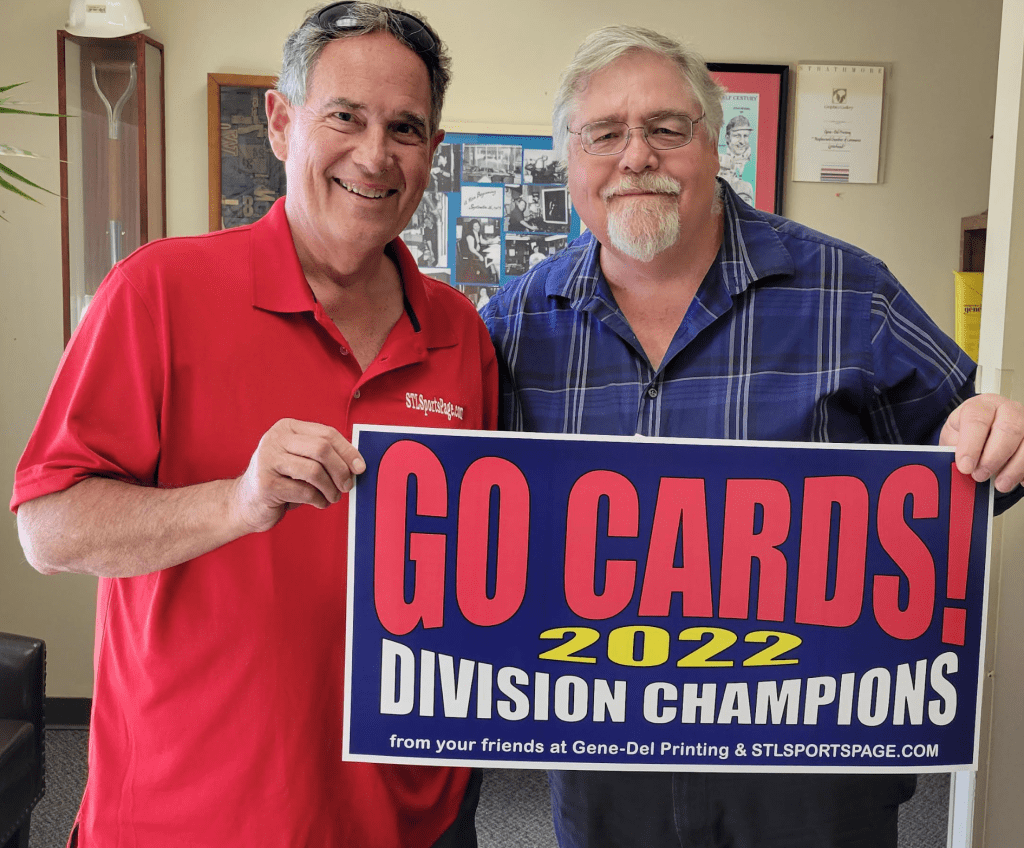