This story is about heroes and they come in all ages, shapes, and forms from the biggest of baseball player like Albert Pujols to the smallest of children like Julia Drummond. The number 11 seems to play a part in their story.

Albert Pujols played his first 11 MLB seasons for the St. Louis Cardinals, starting in 2001. With Pujols at first base, the Cardinals won their 11th World Series in 2011.

The Drummond family was at Busch Stadium on Oct. 2 as part of the “Walk in the Park” annual event put on by the Down Syndrome Association of Greater St. Louis. Albert Pujols, whose daughter Isabella has Downs Syndrome is known to excel on the day honoring those with Down Syndrome—and he didn’t disappoint. 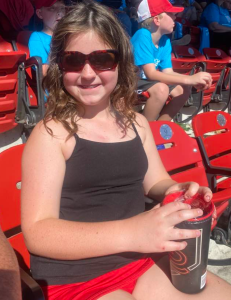 Julia Drummond, the youngest of her family was there to help celebrate her cousin Henry, who has Down Syndrome. She is happy to heap the attention on others, because there was a time when too much focus was always on her– and not for a good reason.

Julia is just as much a survivor as Albert Pujols and their paths on the journey of life have crossed. The year the Cardinals won the World Series—2011—was the year she was born.

In those 11 years since she was born and the Cardinals won the World Series, a lot has happened to Pujols—and lot has happened to Julia.  After the World Series, he left St. Louis to play baseball  10 years with the Angels before being released. After  facing the possibility of being out of baseball, the Dodgers signed him, giving him new life and enthusiasm. This year he came back to the Cardinals– just as strong as before.  In those same 11 years, she went through cancer—but came back stronger than ever.

Of course one can’t compare the ups and downs of a successful baseball player to atrocities that a child with cancer has to face– but Julia and her family are Cardinals fans and she’s been to several games this year and is really hoping for some post season success with the team this year. And while they are completely different, both have had a great come-back. 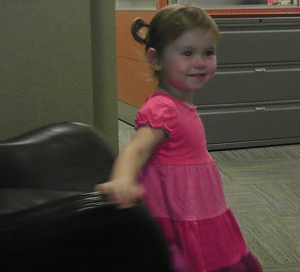 Julia, also called “Jubi” was diagnosed with acute lymphoblastic leukemia in 2014 at age three.  Oh the words her young parents Steve Drummond and Liz Russell-Drummond had to learn but should never have had to hear.

The photo, left was taken six months before her diagnosis, while she was just a carefree, happy little toddler. Once the diagnosis came, everything changed.

Her family’s life centered around her doctor appointments, emergency room visits, trying to ease her nausea caused by the chemotherapy she was taking, helping her manage her pain, and all that goes along with childhood cancer. Her mother once posted a photo of Jubi with her cute little school clothes on– and a throw-up bowl on her lap, to bring awareness to others of what she was going through, just to make it to school.

The year she was diagnosed Albert Pujols was in his third year with the Angels and hit 28 homers that year– with 11 intentional walks.   In 2016,  he hit 31 homers and that same year, after two and a half years of cancer, she had her last treatment. That does not mean it was over because there are yearly scans and every time she gets sick or has the least bit of pain, her parents hold their breath. 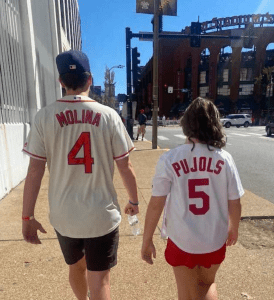 In the 11 years since the Cardinals last World Series, and her 11 years on earth, Julia has been through so much, and that is why just getting to go to a Cardinals game means so much to her and her family. The photo, right, shows Julia and her brother Zach heading to the stadium to see Yadier Molina and Pujols in their last regular season game on Sunday.

That day, the Drummond family, including Julia, her mother Liz, father Steve, and Zach were on the hunt for an Albert Pujols home run –and they got one. Julia’s older sister, Erin is a pre-med student at Mizzou and could not get away that day.

Sitting in the stands at Busch Stadium on such a pretty day and then seeing Pujols hit a home run, they all felt so happy. They are really just thankful to be able to enjoy such an outing with her in great health.

“We are definitely blessed to have her here,” said her mother Liz Russell-Drummond. “She was admitted (to the hospital) or in the clinic most of the first year she was diagnosed and quite often the next 1.5 years.” 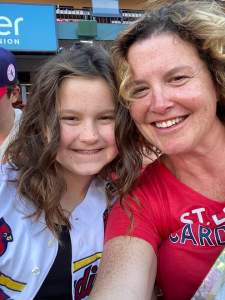 “She literally almost died when we took her to the hospital that first time,” said  Liz. “The doctor could not believe she was walking and talking because after some tests the doctor said if she didn’t have a blood transfusion right then, she would have a heart attack and could die at any minute.

“She was in the hospital for pretty much two and a half years at the beginning of her diagnosis.”

It is so gratifying for Liz and Steve Drummond to have their son with them and know that Erin was where she needed to be. One of the toughest things for a family of a child with cancer is how the siblings fit in.  Their parents are so busy trying to help the sick child they often feel left out. Siblings of children with long-term illnesses can even wish they were sick so they can get some of the attention bestowed on the other child. This adds a whole new dimension for the parents who are spread completely thin. The siblings can sometimes even act out or make bad choices just to be noticed, but that was not the case with Julia’s brother and sister. 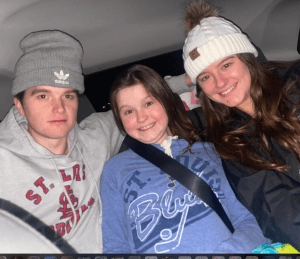 “I’m so proud of my older kids,” said Liz. “They could have been resentful and jealous or slacked and instead they supported their sister and us like no other. Though we were gone a lot, they continued to work hard and assumed leadership at home.”

Julia was very sick during her siblings’ all-important pre-teen and teenage years, but both Erin and Zach got straight A’s, excelled in sports and got scholarships for their hard work—and they were heroes at home in many ways.

Zach is in the accelerated MBA program at Missouri State on a full-ride scholarship and Erin got a full-ride to Mizzou.

“Erin went to Cor Jesu Academy, Class of 2020,” said her mother, “She played varsity ice hockey for John Burroughs School and was teammates with Will DeWitt, son of Bill DeWitt III.”

Zach played hockey at Vianney along with other sports. The parents, grandparents (also heroes for the time they spent with the children) and friends saw to it they got to all their sports and other activities.  Between the two, Erin and Zach played: baseball, volleyball, soccer, ice hockey and field hockey. Looking back on it the family is amazed at all that happened in those 11 years—and it was all made possible by each member supporting the others. 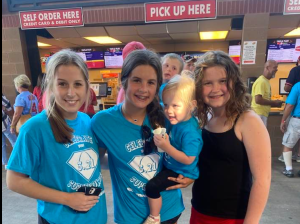 The family is still supporting each other and everyone except Erin were able to meet at Busch Stadium to support their cousin, five-year old Henry, who has Down Syndrome. Julia is shown in the photo, left at the game with with her cousins (left to right) Molly, Kasey and Maura.

Zach is on the MSU Hockey team and had a game in Texas that Friday and Saturday and then drove all night Saturday and into the morning Sunday to be in St. Louis with his family for the last home Cardinals game

He arrived in Springfield, Missouri at 6:45 a.m., unpacked and re-packed, before driving the three hours to St. Lous to meet up with Julia and the rest.

Now, Julia is a fun-loving 11-year-old and a Cardinals fan who was excited to be with her family at Busch Stadium for Albert Pujols’ homerun number 702.

Their paths crossed again as Pujols, whose daughter has Down Syndrome, hit the homer in front of the group of families of children with Down Syndrome.

On this day, Julia was there to support Henry and his parents, (her uncle and aunt) Patrick and Maureen Russell.

“Walk in the Park” is an annual event sponsored by the Downs Syndrome Association of Greater St. Louis (DSAGSL).  It brings families and friends of those with Down Syndrome together for a day of raising awareness and cheering on the Cardinals. It was a special ticket package that included a pep-rally, pre-game walk around the warning track at Busch Stadium, the baseball game ticket, and a t-shirt 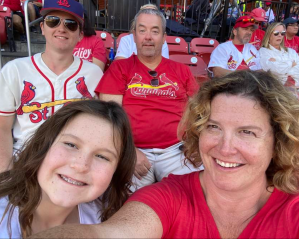 Julia, Liz, Zach and Steve are shown, right,  all smiles after seeing the Pujols home run.

To many, Pujols is a hero. But in the Drummond family, they see their children as real heroes–each in different ways.

“I am a proud mamma,” said Liz Russell-Drummond.

Pujols feels the same way about his own children.

About Isabella, he says, “I am so proud to be her daddy.”

Regarding the number eleven, Julia is hoping to see a World Series this year so she will remember it happened when she was eleven years old. 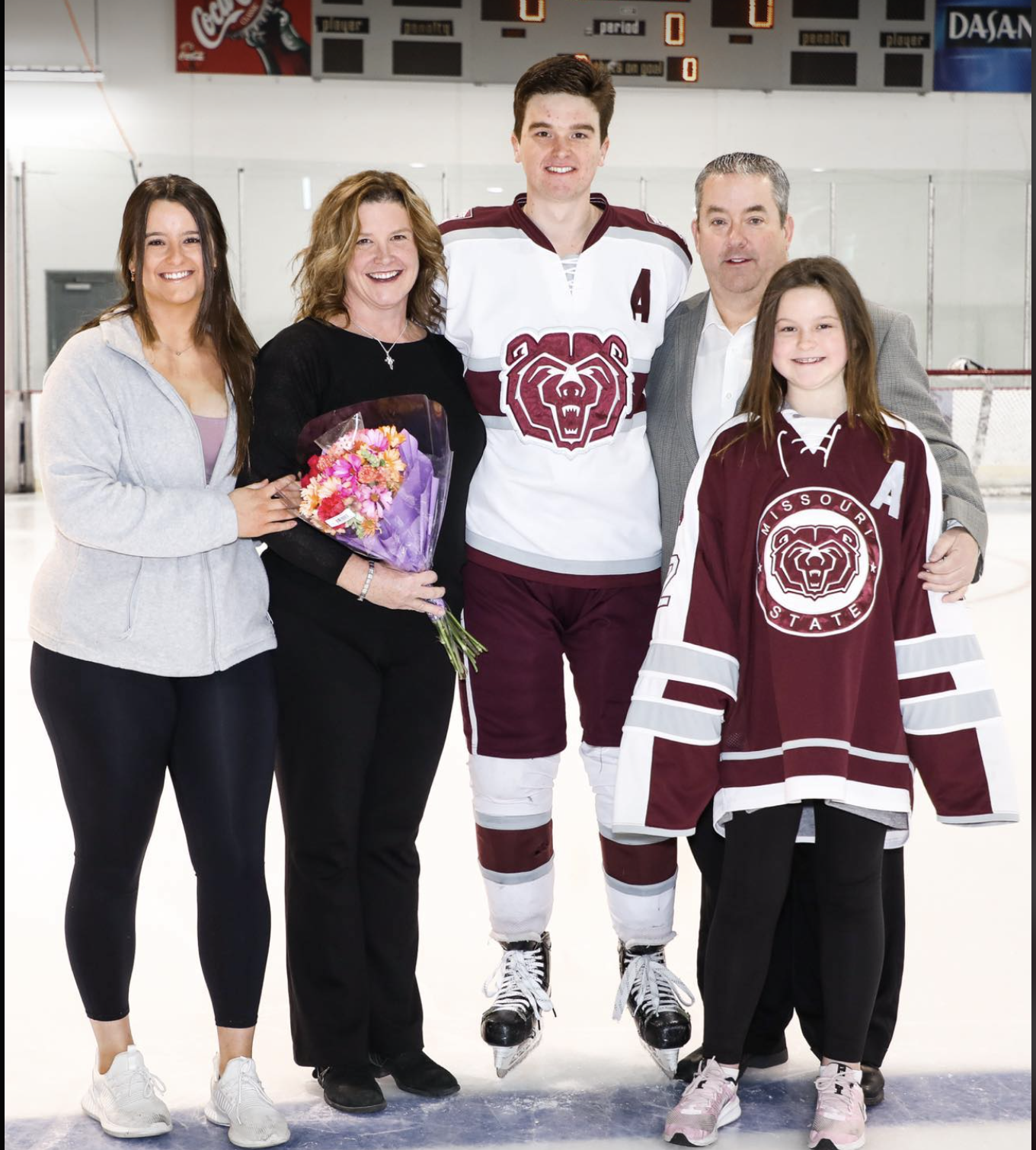